* Auston Matthews added two awards to his collection Tuesday, claiming the Hart Trophy and Ted Lindsay Award. It was the first time in 67 years that a Maple Leafs player received NHL MVP honors and first time ever that a Toronto player was named the League’s Most Outstanding Player.

* Andrei Vasilevskiy and Mikko Rantanen can join rare company as the Lightning and Avalanche clash in Game 4 of the 2022 Stanley Cup Final on Wednesday, with the hosts hoping to pull even and the visitors vying for a 3-1 series lead. 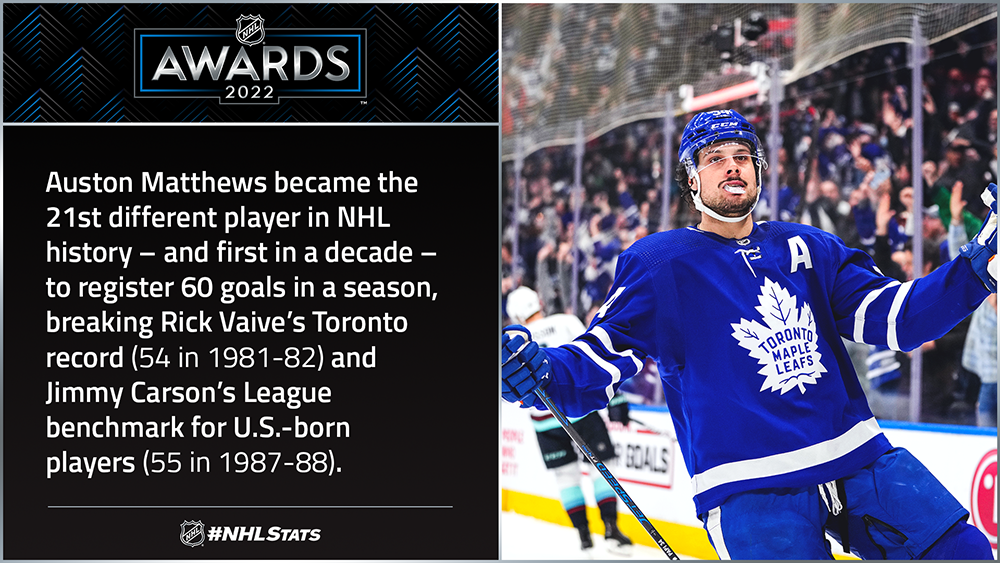 Taking a break from his record-setting playoff run, Avalanche defenseman Cale Makar won the James Norris Memorial Trophy, presented annually “to the defense player who demonstrates throughout the season the greatest all-round ability in the position.” Makar became the first Norris Trophy winner in Avalanche/Nordiques history and adds the honor to his NHL Awards collection that already includes a Calder Memorial Trophy win in 2019-20. 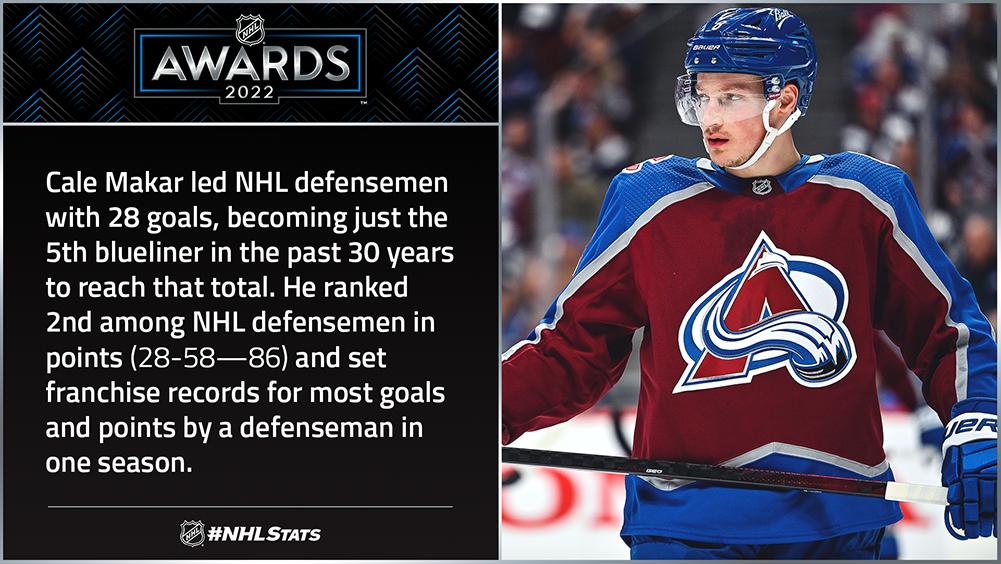 SHESTERKIN SECURES FIRST CAREER VEZINA TROPHY WIN
Rangers netminder Igor Shesterkin was the recipient of the Vezina Trophy, awarded “to the goaltender adjudged to be the best at his position,” as selected by NHL general managers. Shesterkin, a first-time finalist for the honor, became the third Rangers netminder to win the award under the current selection criteria (since 1981-82), joining Henrik Lundqvist (2011-12) and John Vanbiesbrouck (1985-86).

Red Wings defenseman Moritz Seider secured the Calder Memorial Trophy, given annually “to the player selected as the most proficient in his first year of competition.” Seider became the sixth Calder Trophy winner in franchise history and first since goaltender Roger Crozier (1964-65) 57 years ago.

VASILEVSKIY, LIGHTNING LOOK TO EVEN STANLEY CUP FINAL AT 2-2

Andrei Vasilevskiy and Tampa Bay, which rebounded from a 7-0 loss in Game 2 with a 6-2 win Monday, will aim to pull even in the Stanley Cup Final before the series shifts back to Denver.

* The Lightning, who suffered consecutive losses against the Rangers to open the Eastern Conference Final, can become the 17th team in League history to tie two series in one postseason after facing a multi-game deficit in each (a feat New York achieved earlier this year). Only three of the 16 previous clubs did so in both the Final and Conference Finals/Semifinals: the 1965 Black Hawks, 1962 Black Hawks and 1945 Red Wings.

* Tampa Bay can become the 14th team in NHL history to even a best-of-seven Final at 2-2 after losing the first two games. The Lightning would be the third defending champions to accomplish the feat, following the 1966 Canadiens and 1962 Black Hawks. 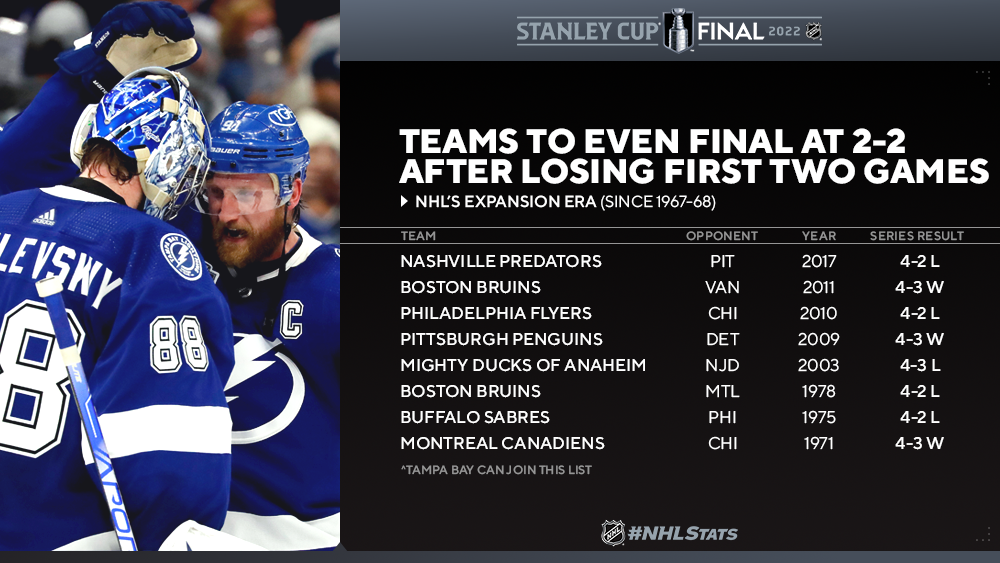 RANTANEN CAN REACH RAREFIED AIR AS AVALANCHE AIM TO AVOID ANOTHER LOSS
Mikko Rantanen and Colorado enter Game 4 of the Stanley Cup Final looking to take a 3-1 series lead and avoid suffering consecutive losses for the first time this postseason. 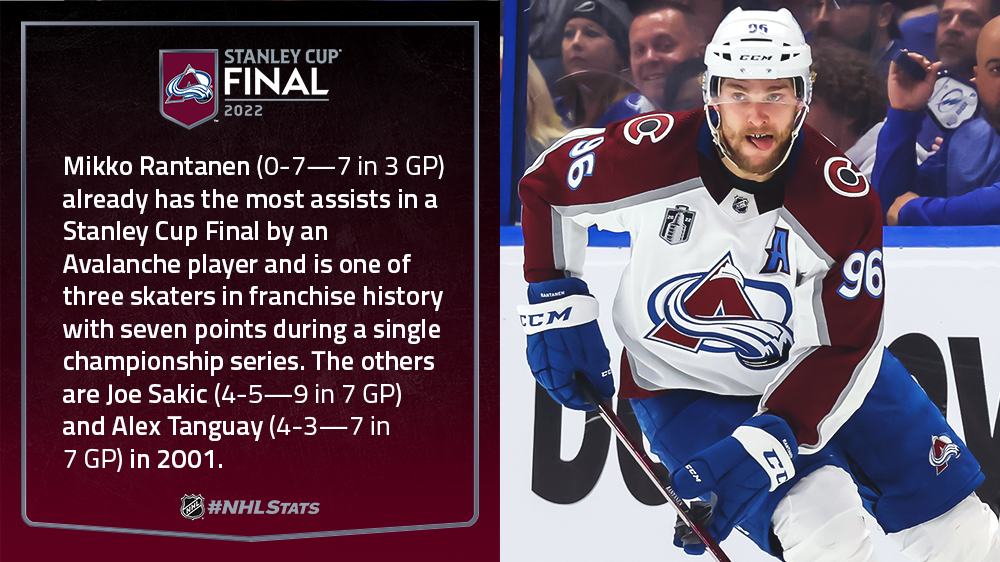