* Chris Kreider has 34 career playoff goals (all w/ NYR) and needs one more to surpass Rod Gilbert for the most in Rangers franchise history. He can become the first player to take the outright postseason goals lead for an Original Six franchise since 2004, when Steve Yzerman scored in Game 6 of the Conference Quarterfinals to reach 68 career playoff tallies and pass Gordie Howe for sole possession of first place on the Red Wings’ all-time list.

* Andrei Vasilevskiy (59-34) is one win away from becoming the 17th goaltender in Stanley Cup Playoffs history to record 60 career victories and only the second active netminder after Marc-Andre Fleury (92-73).

* After the home team captured each of the first four games of the Eastern Conference Final, the Rangers and Lightning will race to capture two more wins in hopes of securing a berth to the 2022 Stanley Cup Final.

* Adam Fox has played a crucial role for the Rangers this postseason and has his sights set on joining rare company should he once again find the score sheet at Madison Square Garden.

* Fresh off collecting 10 wins in a single postseason for the fourth time in his career, Andrei Vasilevskiy can join a select list in NHL history with a 60th career playoff win tonight in Game 5.

* With the League’s championship series right around the corner, catch up with all of Colorado’s storylines with #NHLStats Pack: Stanley Cup Final Edition – Colorado Avalanche.

RANGERS, LIGHTNING READY FOR PIVOTAL GAME 5 AT MSG
After the Lightning captured Game 4 and continued the Eastern Conference Final’s trend of the home team winning each of the first four contests, the Rangers return to Madison Square Garden with the hopes of inching closer to a Stanley Cup Final berth with another victory in front of their home fans. 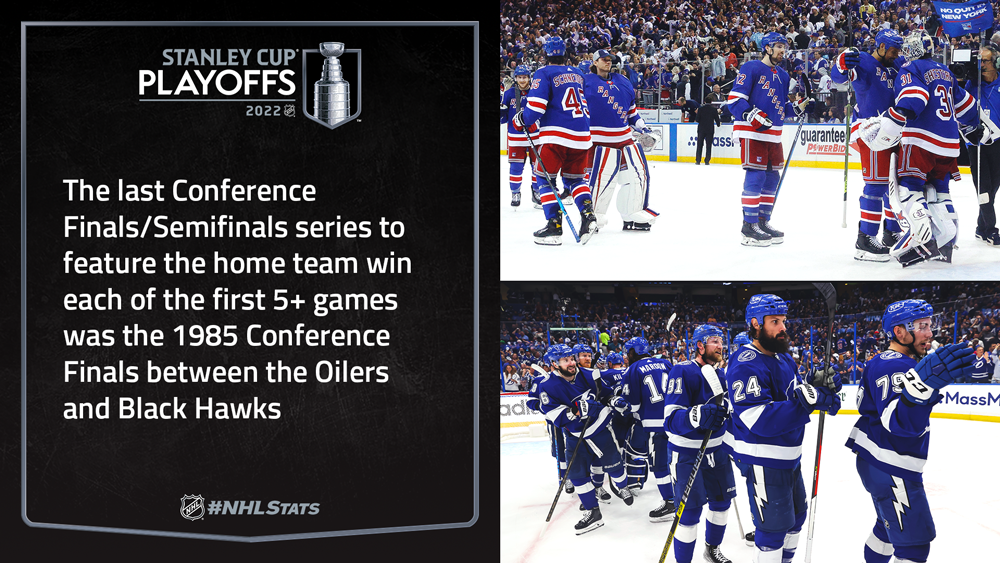 * The series between the Lightning and Rangers marks the seventh Conference Finals/Semifinals in the past six seasons to be tied 2-2 through the first four contests. The winner of Game 5 went on to advance to the Stanley Cup Final in five of the six previous instances through that span. 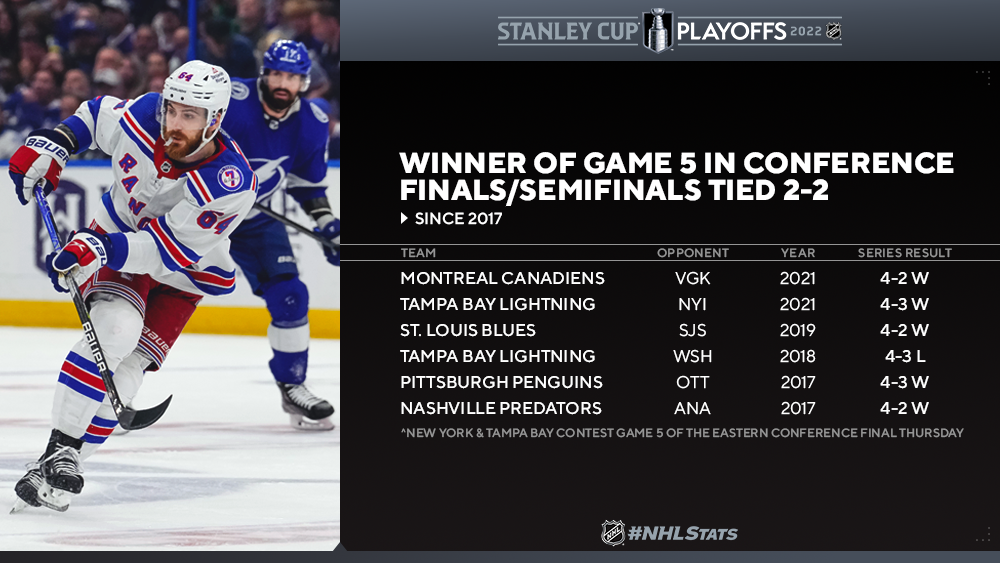 FOX LOOKS TO CLIMB ALL-TIME LIST AS SERIES SHIFTS TO NEW YORK
Adam Fox will look to continue his postseason production after amassing 5-18—23 through 18 games, tops among all defensemen. Should the 2020-21 Norris Trophy winner find the score sheet twice more, a feat accomplished in each of his past four outings at Madison Square Garden, he would become just the seventh blueliner in NHL history to record at least 25 points in a playoff year. 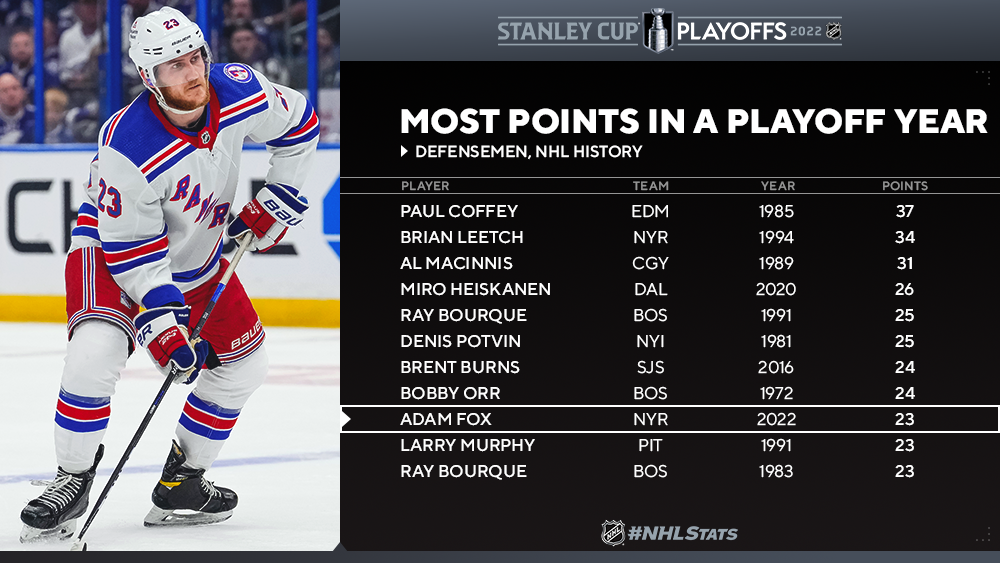 * The Rangers enter Game 5 with an 8-1 record at Madison Square Garden this postseason and sit one victory shy of matching the franchise record for most in a single postseason, previously established during their Stanley Cup run in 1994 (9-4). Overall, the NHL record for most home victories in a single playoff year is held by the 2003 Devils (12-1).

* Meanwhile, Vasilevskiy has posted a double-digit win total in a single postseason for the third straight year and fourth time in his career to boost his all-time record in the Stanley Cup Playoffs to 59-34. He sits one victory shy of becoming the 17th goaltender in NHL history, and second active (Marc-Andre Fleury: 92 W in 167 GP), to earn 60 career postseason wins.

* The Colorado roster includes two players with at least 1,000 career regular-season games who have yet to win the Stanley Cup: Cogliano and Jack Johnson. Cogliano helped Dallas defeat Colorado in the 2020 Second Round and later appeared in all six games during the Stanley Cup Final, with the Stars falling to the Lightning.

* Series Scenarios for Thursday, June 9
* Rangers have to ‘figure out something’ to regain control of Eastern Final

* Brayden Point could return for Lightning in Game 5 against Rangers 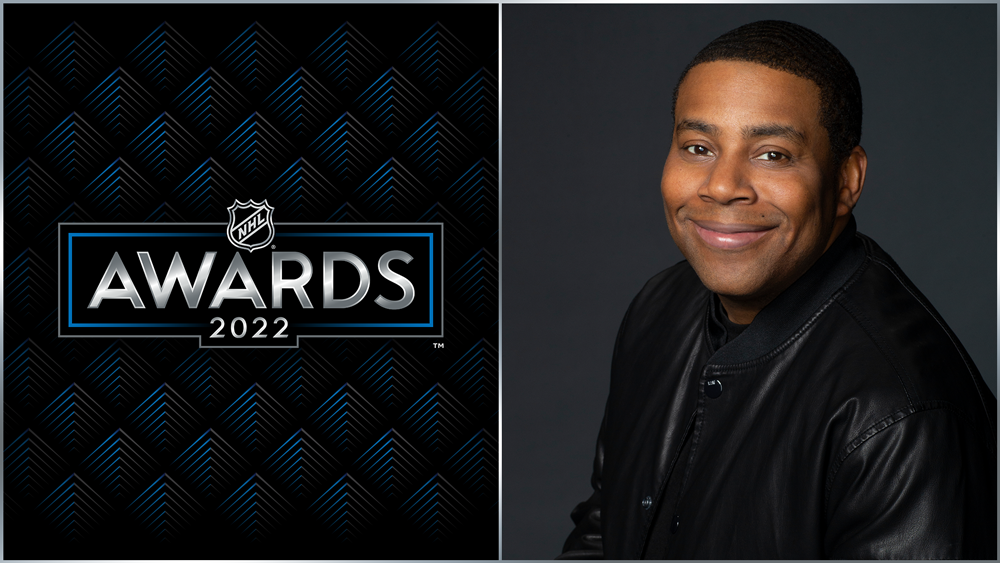