* The Avalanche have a chance to come home from Tampa as Stanley Cup champions after Darcy Kuemper made 16 saves and the club nearly matched the largest margin of victory in a Stanley Cup Final shutout to take a 2-0 series lead.

* The Avalanche, who became the first team in 37 years with four seven-goal outings in a single postseason, captured a seventh straight victory to establish the longest win streak in a playoff year in franchise history.

* With his dad in attendance ahead of Father’s Day, Cale Makar scored a shorthanded goal and power-play goal to join rare company in NHL history to do so in the Stanley Cup Final.

AVALANCHE USE ANOTHER MAMMOTH FIRST PERIOD TO TAKE 2-0 SERIES LEAD
After grabbing a 3-1 lead in the first period of Game 1, the Avalanche filled the net three times in the opening frame of Game 2 and scored seven goals overall to take a 2-0 series lead against the two-time defending Stanley Cup champions.

* The Avalanche became the third team in NHL history to register a shutout in the Stanley Cup Final by a margin of seven or more goals, following the 1919 Seattle Metropolitans (7-0 W in Game 1 vs. MTL) and 1991 Penguins (8-0 W in Game 6 at MNS).

* Colorado scored at least seven goals in a game for the fourth time this postseason, a first by any team in 37 years and just the seventh time any club has done so. The Avalanche became the first team to score 11 or more goals through two games of a Final since… 1996, when they did it. 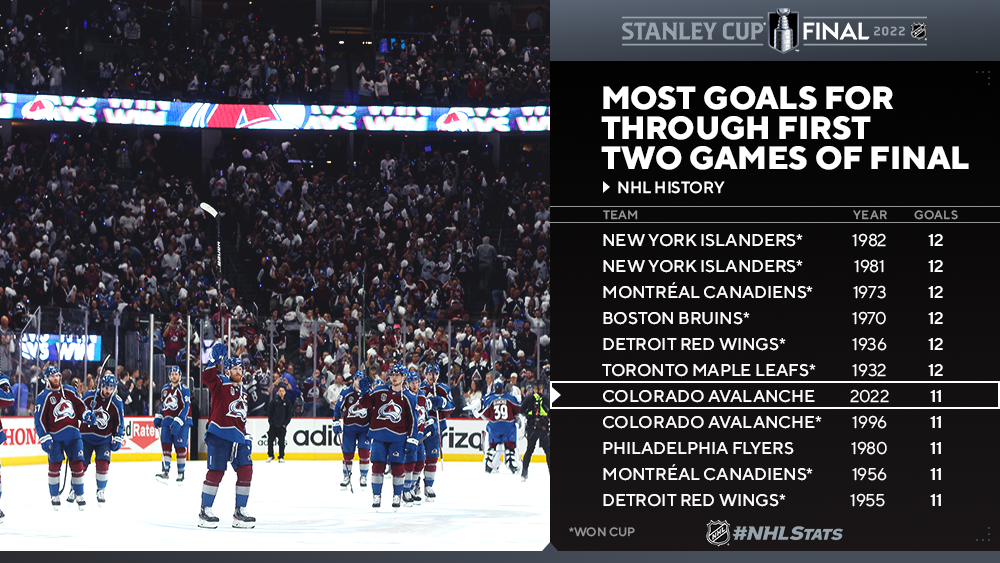 * The Avalanche became the third team in Stanley Cup Final history – and first in more than 40 years – to score at least three goals in the first period of both Game 1 and Game 2. The 1981 Islanders and 1936 Red Wings also did so en route to 4-1 and 3-1 series wins, respectively, but neither club extended the streak to three contests.

* An already-energized crowd raised the decibel level even higher after learning the Colorado Mammoth had claimed its first National Lacrosse League Cup since 2006, setting the stage for yet another sing-along to Blink-182’s ‘All the Small Things’ moments later.

MAKAR PUTS UP SPECIAL PERFORMANCE AHEAD OF FATHER’S DAY

With his dad in attendance ahead of Father’s Day, Cale Makar scored twice in the third period to become the second defenseman in NHL history to score both a shorthanded and power-play goal in a Stanley Cup Final game. The only other instance came in the May 24 suspended game during the 1988 Final when Bruins defenseman Glen Wesley – a rookie at the time – did so, with both goals coming in the second period just before the game was called due to a power failure at Boston Garden.

* Overall, it was the 11th time in NHL history that a defenseman scored via both special teams in any postseason game. The last such instance came against Colorado in 1996 when Paul Coffey did so for Detroit in Game 1 of the Western Conference Final.

* After being held to one assist in Game 1, Avalanche defensemen contributed 3-1—4 on Saturday with Josh Manson (1-0—1) and Devon Toews (0-1—1) also finding the score sheet. Colorado’s defensive core has combined for 17-44—61 in 16 games this postseason and established franchise benchmarks for most goals and points by defensemen in one playoff year.

* Colorado equaled the 2020 Stars (14-45—61, excluding SCQ) for the most combined points by defensemen in a four-round postseason over the past 27 years and matched the 2021 Lightning (17, excluding SCQ) for the most goals from the blueline in the past seven. Of note: The 2010 Blackhawks had 20-43—63 from players listed as defensemen, but Dustin Byfuglien played forward for much of the postseason and collected 11-5—16 overall and therefore the club is excluded in this comparison.

Nathan MacKinnon (0-1—1)and Mikko Rantanen (0-3—3) extended their home point streaks to nine and seven games, respectively, as the Avalanche improved to 7-2 at Ball Arena this postseason. MacKinnon tied Claude Lemieux (9 GP in 1997) for the longest home point streak in franchise playoff history.

* Rantanen became the seventh different player in franchise history to record three or more points in any Stanley Cup Final game, following Joe Sakic (2x), Adam Foote, Alex Tanguay, Peter Forsberg, Rene Corbet and Rob Blake. In the process, Rantanen boosted his assist count at Ball Arena this postseason to 13, surpassing Sakic (12 in 1997) for the most at home in one playoff year. 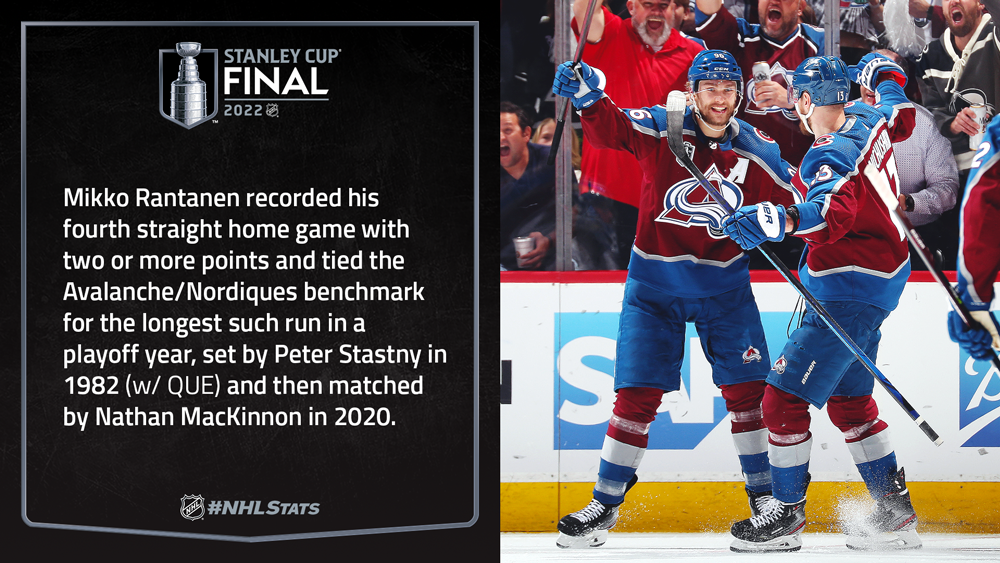 Colorado holds a 2-0 series lead in the Stanley Cup Final for the second time, following their sweep of Florida in 1996. This is the first time Tampa Bay has trailed 2-0 in the Final.

* Colorado became the first team in 46 years to take a 2-0 series lead in a best-of-seven Stanley Cup Final against the defending champions.

* Tampa Bay is the first team in the NHL’s expansion era (since 1967-68) and sixth in League history to face a 2-0 series deficit in both the Conference Finals/Semifinals and Stanley Cup Final. They will look to become the first to respond by winning the Cup, following losses by the 1965 Blackhawks, 1963 Red Wings, 1962 Blackhawks, 1959 Maple Leafs and 1945 Red Wings.

* Colorado became the 20th team in NHL history – and second in as many years after the Lightning in 2021 – to pull ahead 2-0 in at least three best-of-seven series within the same postseason. Fourteen of those clubs went on to win the Stanley Cup.