* Nazem Kadri collected three second-period points in a span of 2:04 to join some rare Stanley Cup Playoffs lists and help Colorado claim a 2-0 lead in its Western Conference Final series.

* Pavel Francouz, who returned to the Avalanche crease this season after missing the entire 2020-21 campaign due to injury, foiled the Oilers to record his second career playoff shutout and first since the 2020 Stanley Cup Qualifiers Round Robin.

* The Lightning will look to even their Eastern Conference Final series with the Rangers, who are 7-0 in their last seven games at Madison Square Garden.

AVALANCHE SCORE THREE GOALS IN 124 SECONDS TO TAKE 2-0 SERIES LEAD
Colorado scored three goals in a span of 2:04 during the second period – including two which were 15 seconds apart – en route to blanking Edmonton and taking a 2-0 lead in the Western Conference Final. Nazem Kadri (0-3—3) factored on all three of those goals to match the Avalanche/Nordiques franchise record for most assists in a playoff period, a mark set by Quebec’s Risto Siltanen in Game 5 of the 1987 Division Semifinals and equaled by Colorado’s Joe Sakic in Game 2 of the 1996 Stanley Cup Final. 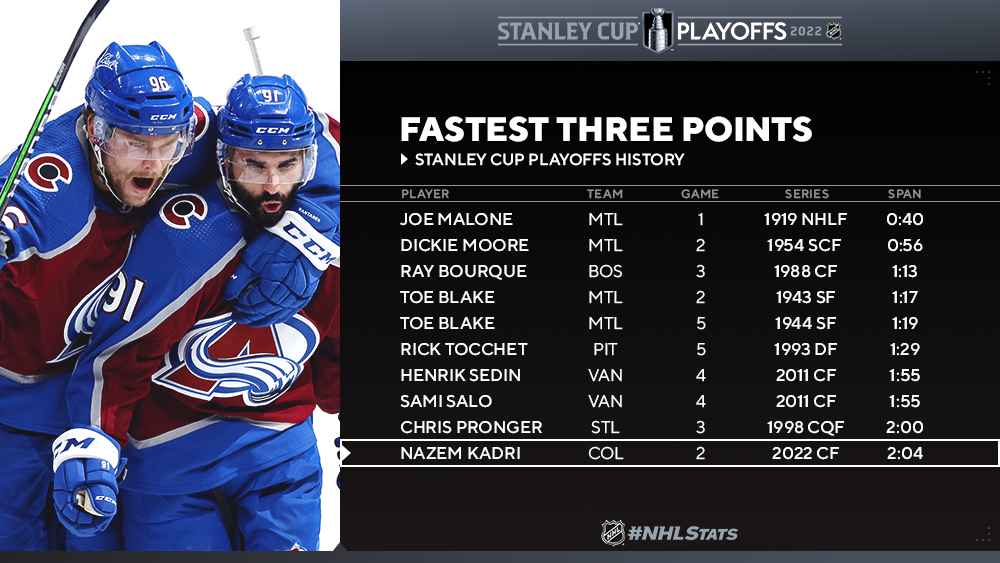 * Kadri became the eighth different player in club history with three primary assists in a postseason contest and first since 2004, when Marek Svatos achieved the feat during a series-clinching win in Game 5 of the Conference Quarterfinals. Kadri (15-18—33 in 29 GP) has averaged over a point per game in the playoffs since joining the Avalanche.

* Pavel Francouz (24 saves), who improved to 4-0 in four appearances this postseason (2.48 GAA, .917 SV%, 1 SO), was signed by Colorado on May 2, 2018, after earning KHL Best Goaltender honors and representing Czechia at the Winter Olympics that season. He missed the entire 2020-21 campaign after having double-knee and double-hip surgery before returning to the Avalanche crease this season, going 15-5-1 in 21 appearances.

SUTTER SECURES 2021-22 JACK ADAMS AWARD AS TOP NHL HEAD COACH
Darryl Sutter of the Flames was named winner of the 2021-22 Jack Adams Award, presented annually “to the coach adjudged to have contributed the most to his team’s success.” Click here to read more about Sutter, who became the second Jack Adams Award winner in franchise history (also Bob Hartley in 2014-15) as well as the second member of his family to receive the honor (also Brian Sutter in 1990-91 w/ STL). 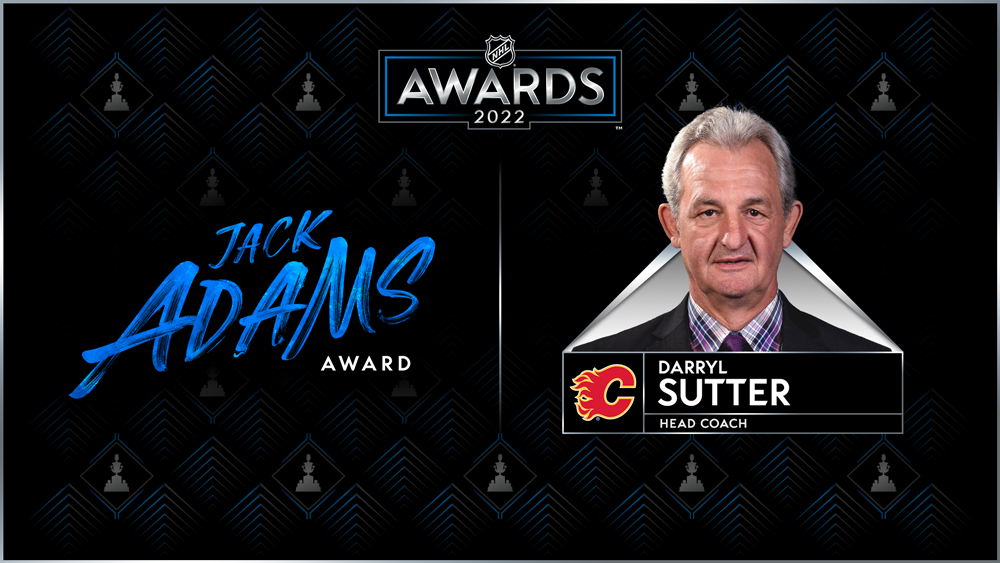 * The winner of the 2021-22 Bill Masterton Memorial Trophy will be revealed Friday. Islanders defenseman Zdeno Chara, Flyers forward Kevin Hayes and Canadiens goaltender Carey Price are the three finalists for the award, which is given “to the player who best exemplifies the qualities of perseverance, sportsmanship and dedication to hockey.” 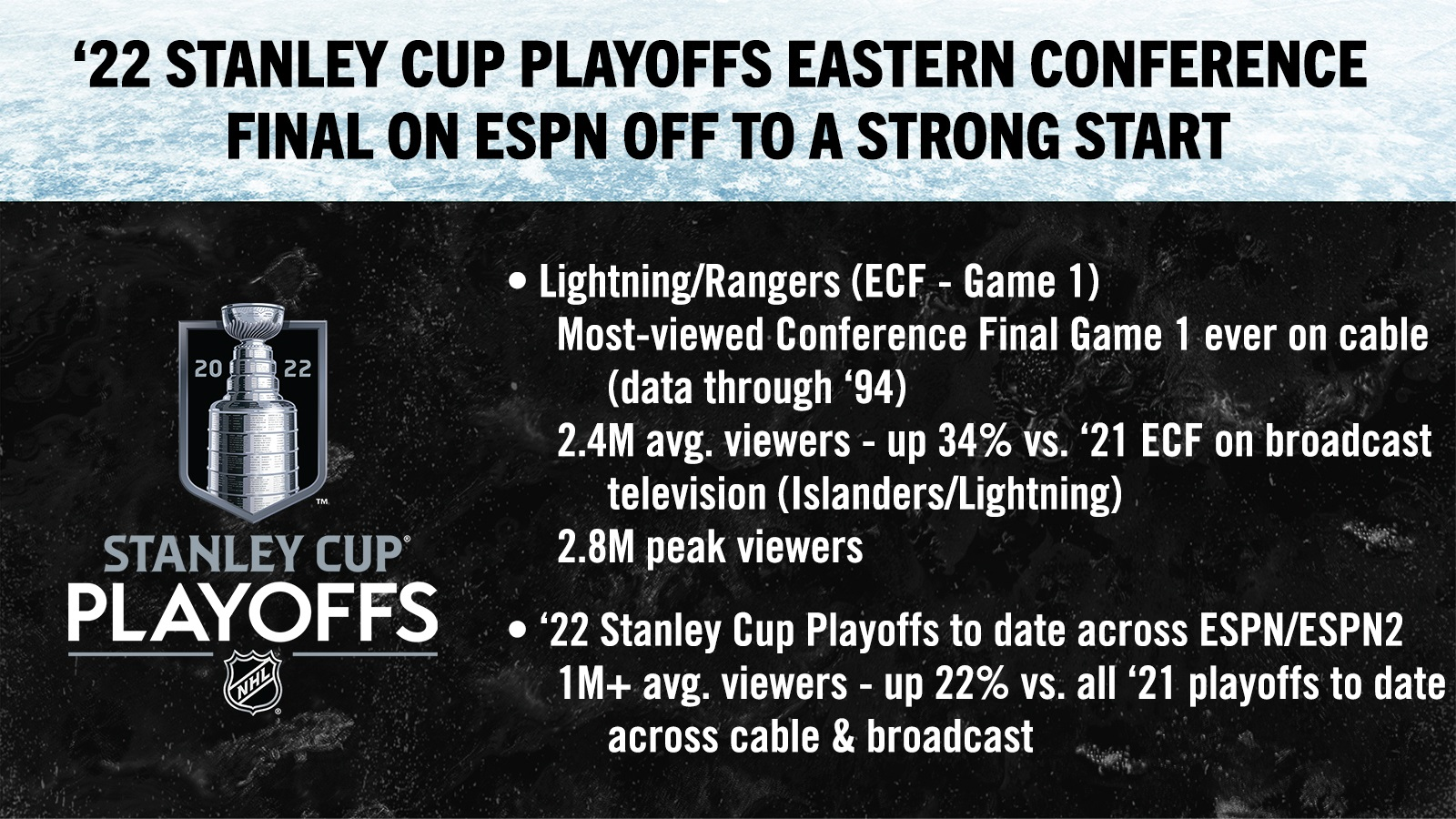 LIGHTNING LOOK TO STRIKE EVEN, RANGERS AIM TO KEEP ROLLING AT HOME
After falling to New York in Game 1, the two-time defending Stanley Cup champion Lightning will look to bounce back Friday at Madison Square Garden while the Rangers aim to extend their home winning streak to eight contests. 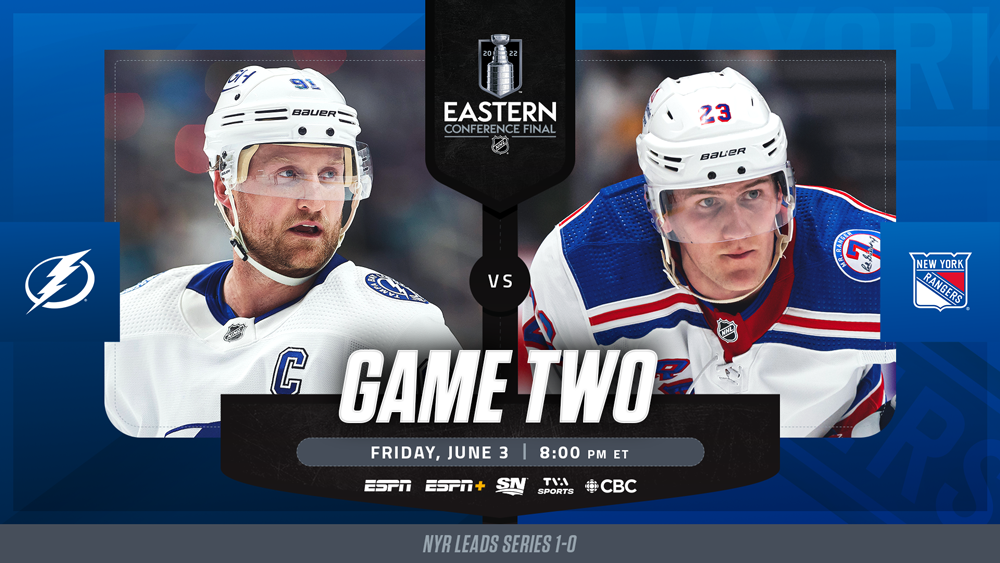 * Tampa Bay has gone on to win a Conference Finals/Stanley Cup Semifinals series after dropping Game 1 twice in franchise history – the Lightning did so in 2015 versus the Rangers and in 2021 against the Islanders. Tampa Bay owns an all-time record of 15-5 in the game immediately following a loss during a Conference Finals/Stanley Cup Semifinals, including a perfect 5-0 mark since 2020.

* The Rangers, whose only loss at Madison Square Garden during the 2022 Stanley Cup Playoffs was a triple-overtime defeat in Game 1 of the First Round, will look to extend their franchise-record postseason home winning streak and become the first team with a run of eight or more contests since the Kings in 2013 (8-0). Mika Zibanejad (5-6—11 in 8 GP) and Adam Fox (3-8—11 in 8 GP) have each amassed a team-leading 11 points at Madison Square Garden this postseason, with the latter finding the score sheet in all eight home games contested by the Rangers. 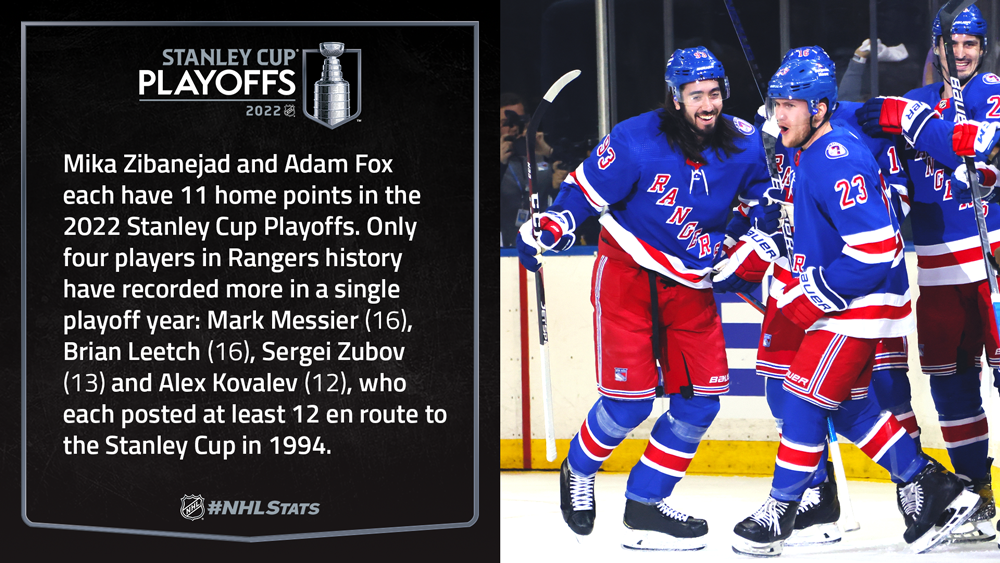