* The Lightning will skate into Game 2 facing a 1-0 series deficit in the Stanley Cup Final, a shortfall the club has overcome to claim a championship on two occasions (2004 & 2020).

* Colorado has its sights on taking a 2-0 series lead for the third time in the 2022 Stanley Cup Playoffs, a feat 19 teams in NHL history have accomplished in a single postseason to date – including Tampa Bay in 2021.

* The NHL and NHLPA announced today that the Team Payroll Range established for the 2022‑23 League Year provides an Upper Limit of $82.5 million.

* More presenters for the 2022 NHL Awards were announced today, which includes individuals whose stories inspired the hockey community this season – including the likes of Kraken fan Nadia Popovici, who rose to worldwide fame after pointing out a cancerous mole on the neck of Canucks assistant equipment manager Red Hamilton. 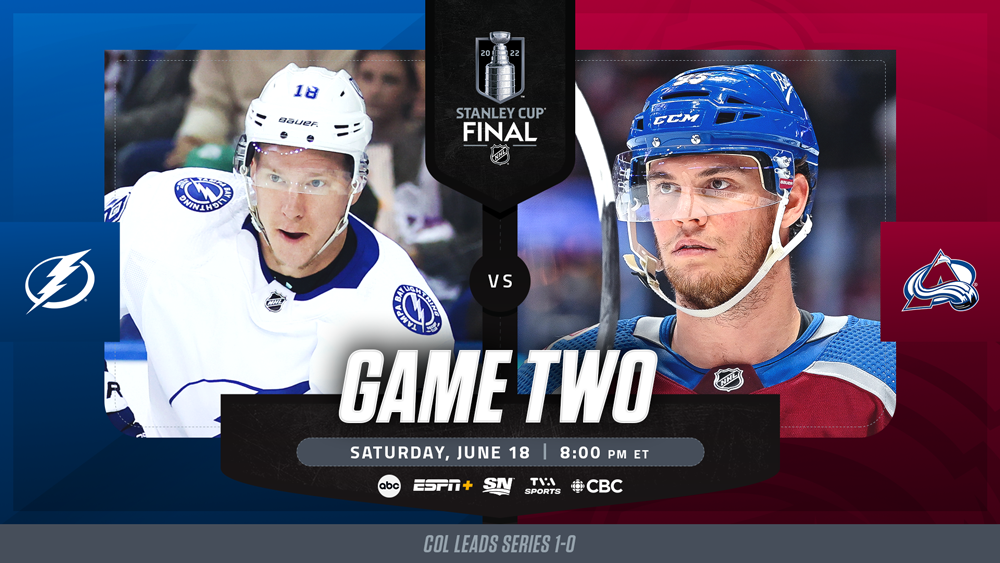 The Lightning find themselves in familiar territory, facing a 1-0 series deficit for the third time this postseason and fourth time in franchise history during the Stanley Cup Final.

* Tampa Bay can become the fourth team in NHL history to win the Stanley Cup after losing the opening game of at least three series that postseason. The 1991 Penguins lost Game 1 in all four rounds before winning the Cup, while the 2011 Bruins and 2018 Capitals fell behind 1-0 three times (including the Final).

* Three of the past four Stanley Cup champions have rallied to win the championship after losing the opener in the Final, including the Lightning in 2020 (also 2018 WSH & 2019 STL). That was one of 12 times Tampa Bay has overcome a 1-0 series deficit to win a best-of-seven and the second time they did so in the Final (also 2004 vs. CGY). Their .600 series winning percentage when facing a 1-0 deficit in a best-of-seven is the highest in NHL history (min. 10 series).

* A team has rallied to win a best-of-seven Final after losing Game 1 in overtime four times (4-11), including once after losing the opener in extra time on the road.

* Since 1939 when the best-of-seven format became a permanent fixture in the Stanley Cup Final, the series has been tied 1-1 on 30 occasions, including three of the past four – the lone exception in that span was last year when Tampa Bay pulled ahead 3-0.

AVALANCHE LOOKING FOR YET ANOTHER 2-0 SERIES LEAD

The Avalanche improved to a perfect 3-0 in Stanley Cup Final openers and eye a 2-0 lead for the third time this postseason and second time ever in the championship series (1996).

* Wednesday marked the 20th time that Game 1 of the Stanley Cup Final required overtime and 16th time that opening contest was in a best-of-seven series. In the previous 15 best-of-seven matchups, the winner pulled ahead to a 2-0 series lead nine times (most recently in 2014).

* Colorado can become the 20th team in NHL history – and second in as many years after the Lightning in 2021 – to pull ahead 2-0 in at least three best-of-seven series within the same postseason.

The 2022 Stanley Cup Final opened with a boisterous crowd, a first-period flurry of scoring, a multi-goal comeback and overtime magic, with top scorers and clutch players rising to the occasion for each team.

* The trio of Gabriel Landeskog (9-10—19), Mikko Rantanen (5-14—19) and Nathan MacKinnon (11-8—19) each found the score sheet in the series-opening win and sit one point shy of joining Cale Makar (5-17—22) in reaching the 20-point mark in this postseason. The 2022 Stanley Cup Playoffs can mark the first year the Avalanche or Nordiques have at least four 20-point players. 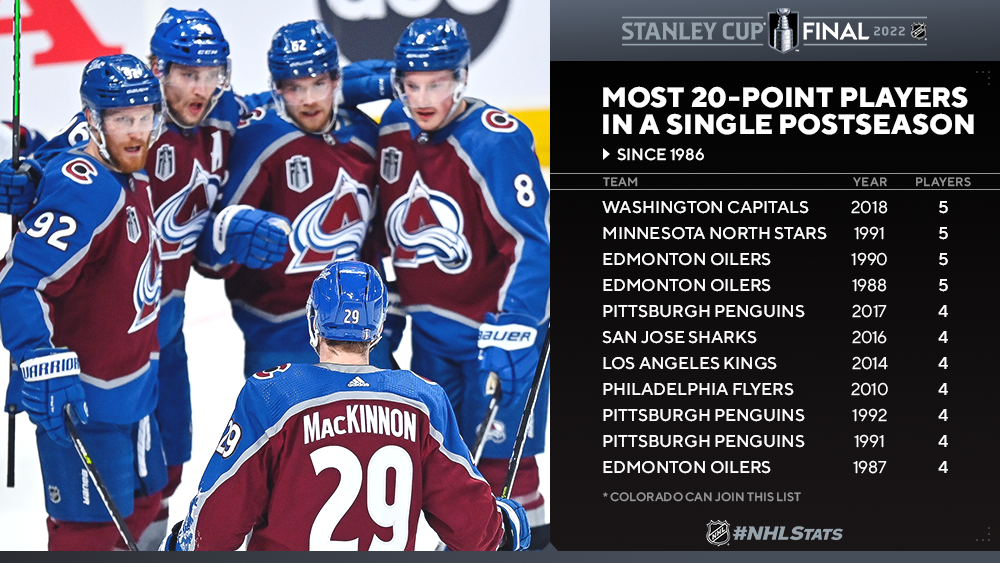 * Ondrej Palat converted a highlight-reel pass from Nikita Kucherov to kickstart Tampa Bay’s comeback attempt in Game 1 and has collected 6-6—12 in 11 games since the beginning of the Second Round – including an NHL-best (tied) five goals dating to the Conference Finals. 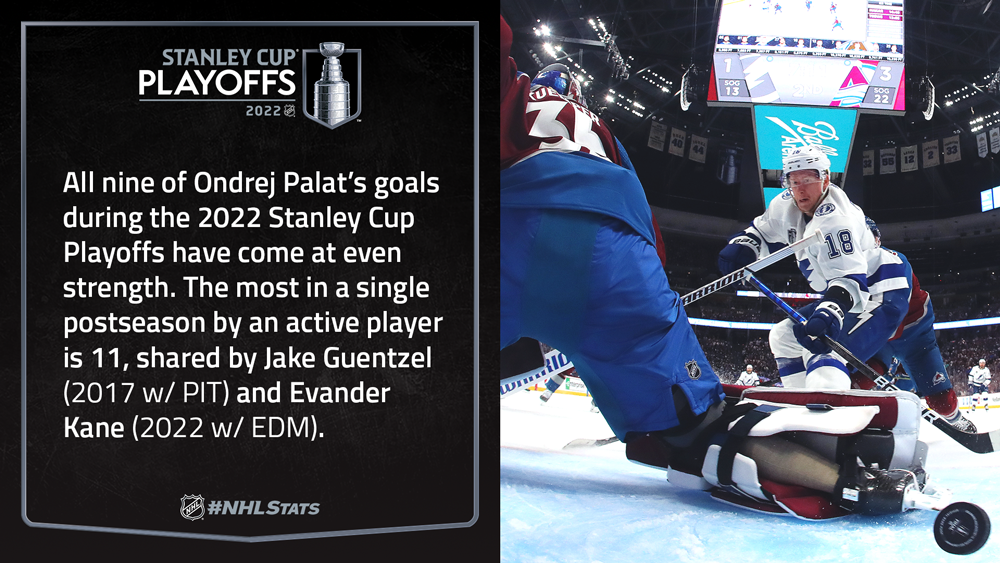 Four of the top-ranked North American skaters for the 2022 Upper Deck NHL Draft will be in attendance for Game 2 of the Stanley Cup Final on Saturday: No. 1-ranked Shane Wright of the OHL’s Kingston Frontenacs, No. 3-ranked Cutter Gauthier of USA Hockey’s National Team Development Program’s Under-18 team as well as No. 4-ranked Matthew Savoie and No. 5-ranked Conor Geekie, who are teammates with the WHL’s Winnipeg Ice.

* The group is set to attend Saturday’s morning skates where they will meet members of the Lightning and Avalanche, followed by a sit-down with NHL Network and involvement in pre-game festivities.

* The 2022 Upper Deck NHL Draft will commence with Round 1 on Thursday, July 7, at Bell Centre in Montreal (7 p.m. ET on ESPN, ESPN+, SN, TVAS). The Canadiens, who hold the No. 1 pick, can become the first host city to select first overall since their Original Six rival Maple Leafs drafted Wendel Clark in that slot in 1985 at the Metro Toronto Convention Centre. 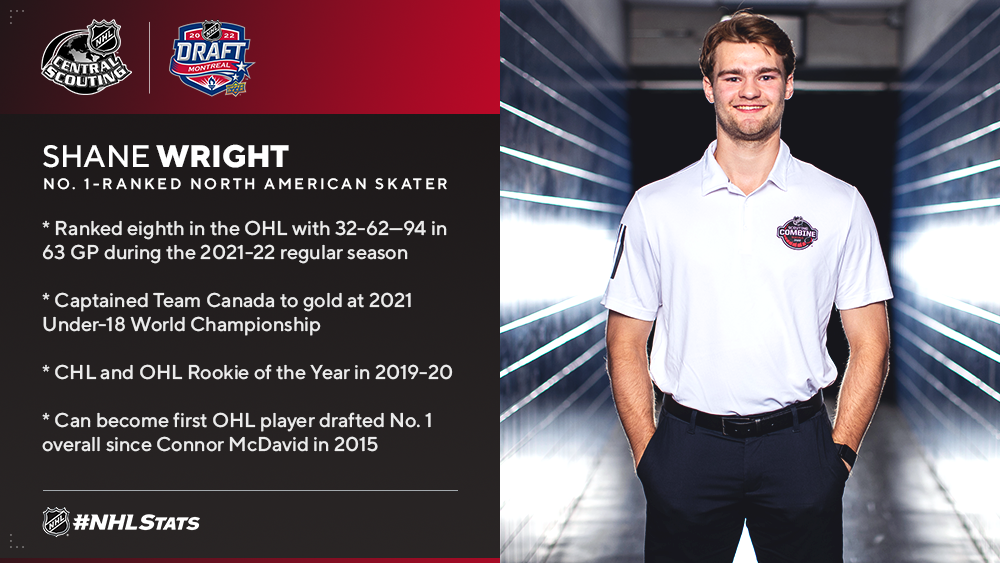