* For a ninth consecutive year, at least one final-four series will require six or seven games – tied for the longest such stretch since the Conference Finals were introduced in 1982 – following a Lightning victory Tuesday. The other nine-year stretch spanned from 1983 to 1991.

* The home team has claimed all four games in the Eastern Conference and 50 victories overall this postseason – the most in seven years.

* P.K. Subban received the King Clancy Memorial Trophy as the last award was presented ahead of the live NHL Awards show during the Stanley Cup Final on June 21 (7 p.m. ET on ESPN, SN, TVAS).

PALAT, STAMKOS, KUCHEROV ALL SCORE AS LIGHTNING TIE SERIES
The Eastern Conference Final will require at least six games after the Lightning claimed their sixth consecutive home win to tie the series at 2-2. After scoring the go-ahead, game-winning goal in the final minute of regulation in Game 3, Ondrej Palat contributed 1-2—3 in the series-tying victory.

* Palat, who has developed a reputation for clutch scoring in his playoff career, has a stat line of 16-14—30 in 38 games during the Conference Finals/Semifinals – the most goals in the round among active players and the third-most points behind teammates Nikita Kucherov (11-34—45 in 38 GP) and Victor Hedman (6-25—31 in 45 GP).

* Steven Stamkos tallied his third goal of the series to keep pace with Palat, Kucherov and New York’s Mika Zibanejad for the lead among all players.

* Kucherov extended his goal streak to three games to match the longest of his playoff career, equaling a mark set in 2016. He and Stamkos scored a goal in the same playoff game for the 12th time, with the Lightning claiming their 11th consecutive win in that scenario and moving to 11-1 overall (the lone defeat: Game 1 of 2014 R1).

With fans bringing NHL arenas to life once again during the 2022 Stanley Cup Playoffs, host teams are giving them plenty to cheer about as Tampa Bay’s victory was the 50th by a home team through 81 games this postseason.

* The home team has won all four games so far in the Eastern Conference Final as the series shifts back to Madison Square Garden. 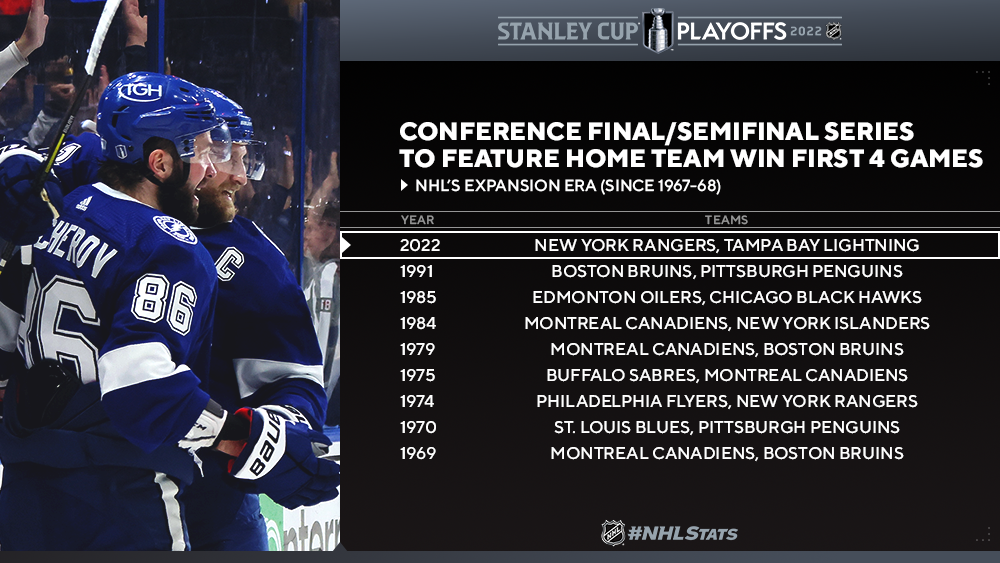 LIGHTNING SHOW CHAMPIONSHIP PEDIGREE IN TYING EASTERN CONFERENCE FINAL
Facing a 2-0 series deficit for the first time since the 2019 First Round, the Lightning have posted back-to-back home wins to turn the Eastern Conference Final into a best-of-three from this point forward.

* The Lightning look to overcome a 2-0 series deficit to win a best-of-seven for the second time in franchise history – the only instance to date came in the 2003 Conference Quarterfinals against the Capitals.

* This is the 12th time that a defending Stanley Cup champion has tied a best-of-seven series at 2-2 after losing the first two games. It is the fifth time it has happened in the Conference Finals/Semifinals, with two of the previous four clubs going on to reach the Final – the 1984 Islanders and 1962 Blackhawks.

* Overall, defending Stanley Cup champions have overcome a 2-0 series deficit to win a best-of-seven on seven occasions in NHL history – regardless of how the series played out – with the 2014 Blackhawks being the most recent example (R1 vs. STL: 4-2 W). Of those seven series comebacks, six saw the reigning champs even the series at 2-2 (the lone exception being the 1992 Penguins, who trailed 2-0 and 3-1 before eliminating the Capitals in seven games).

SUBBAN RECEIVES 2021-22 KING CLANCY MEMORIAL TROPHY
Devils defenseman P.K. Subban is the 2021-22 recipient of the King Clancy Memorial Trophy, awarded to a player who has shown “leadership on and off the ice and who has made a noteworthy humanitarian contribution to his community.” Subban, who was presented with the award by former teammate and last year’s winner Pekka Rinne, will receive a $25,000 donation from the National Hockey League Foundation to benefit a charity or charities of his choice.

* Each NHL team nominated a player for the King Clancy Trophy, with the three finalists and winner chosen by a committee of senior NHL executives led by Commissioner Gary Bettman and Deputy Commissioner Bill Daly. Click here to learn more about Subban’s community involvement. 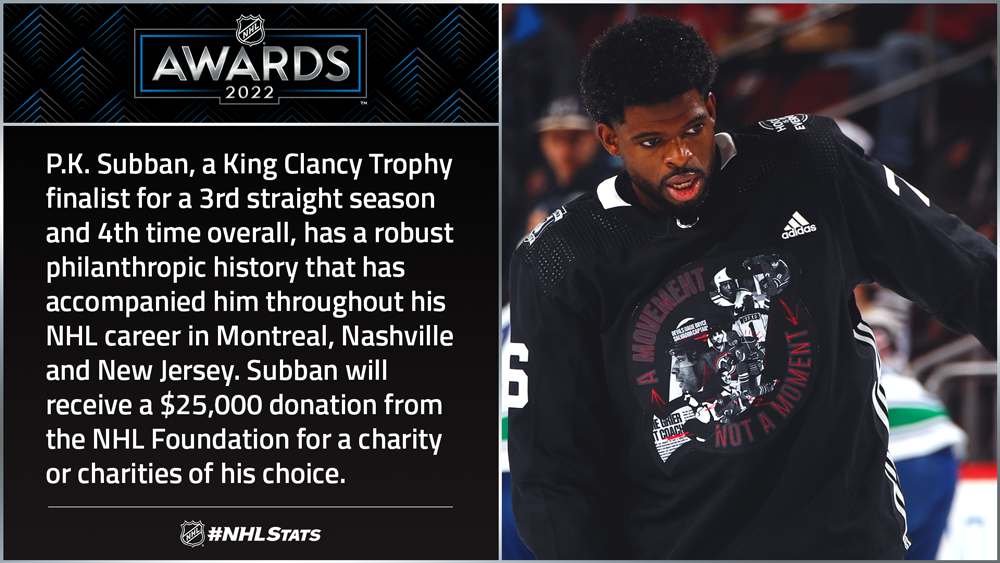 GWC NORTH AMERICAN TOURNAMENT CONTINUES THIS WEEKEND
While Erik ‘ENCEKI’ Tammenpää added to his Gaming World Championship success this past weekend at the GG22 DreamHack Sports Festival in Maastricht, Netherlands, the focus now shifts to the North American GWC.

* While the ‘Battle of Alberta’ may be over on the ice, Oilers representative uninsta1l_NHL and Flames representative Geimer– will battle it out on the virtual ice this weekend in the Upper Bracket for a ticket to the North American Club Championship in Montreal. OhhCrosby87 is also waiting in the lower second-chance bracket for the opportunity of redemption when he takes on the loser of the Oilers-Flames matchup.

* Click here to read more from the June 7 edition of CHEL Intel. 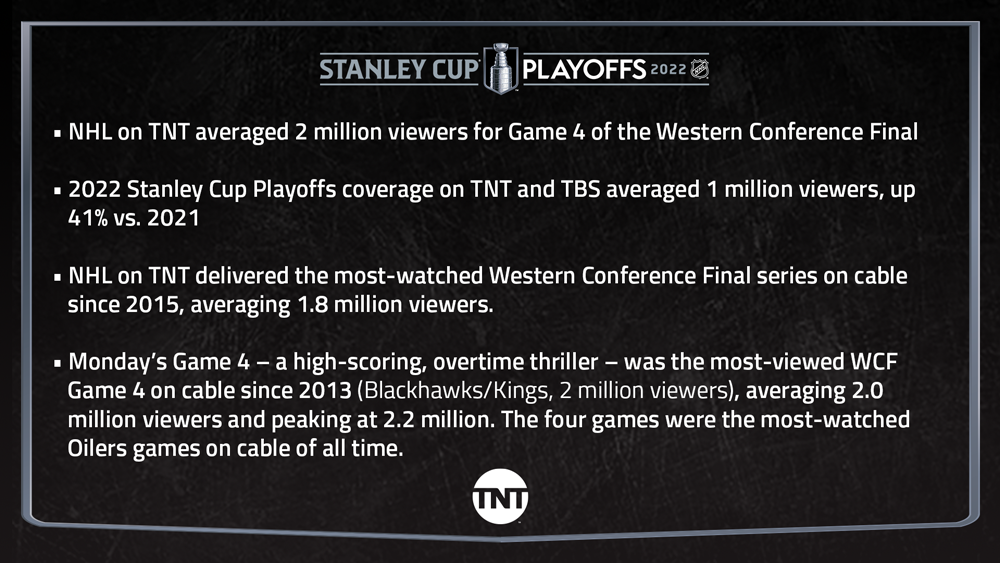 AVALANCHE AWAIT OPPONENT FOR STANLEY CUP FINAL
While they await their opponent, one thing is certain for the Avalanche: they will host Game 1 of the Stanley Cup Final for the third time in as many appearances.

* In 1996, the club scored three unanswered goals in the second period to claim a 3-1 win against the Panthers at McNichols Sports Arena. Five years later, Joe Sakic (2-1—3) and Chris Drury (1-0—1) combined for the first three goals and Patrick Roy posted a 25-save shutout as the club opened the 2001 Final with a 5-0 victory against Martin Brodeur and the Devils at Pepsi Center.

* Should Colorado face Tampa Bay, it would mark the seventh time the franchise clashes against the defending Stanley Cup champions in a postseason series (2-4). They have won two of the three matchups since relocating to Denver in 1995-96, including the only time that series occurred in the Stanley Cup Final (4-3 W vs. NJD in 2001).

* One of the three instances of the franchise facing a defending Stanley Cup champion as the Quebec Nordiques also happened to be the only time the club has met the Rangers in the postseason. New York entered the 1995 Conference Quarterfinals as reigning champions and pulled ahead 3-2 in the best-of-seven. In what ended up as the series finale on May 16, 1995, the Rangers built a 4-0 lead – and quashed a comeback attempt that saw Sakic (1-1—2) factor on both Quebec goals – to defeat the Nordiques in the team’s last game before relocating to Denver. 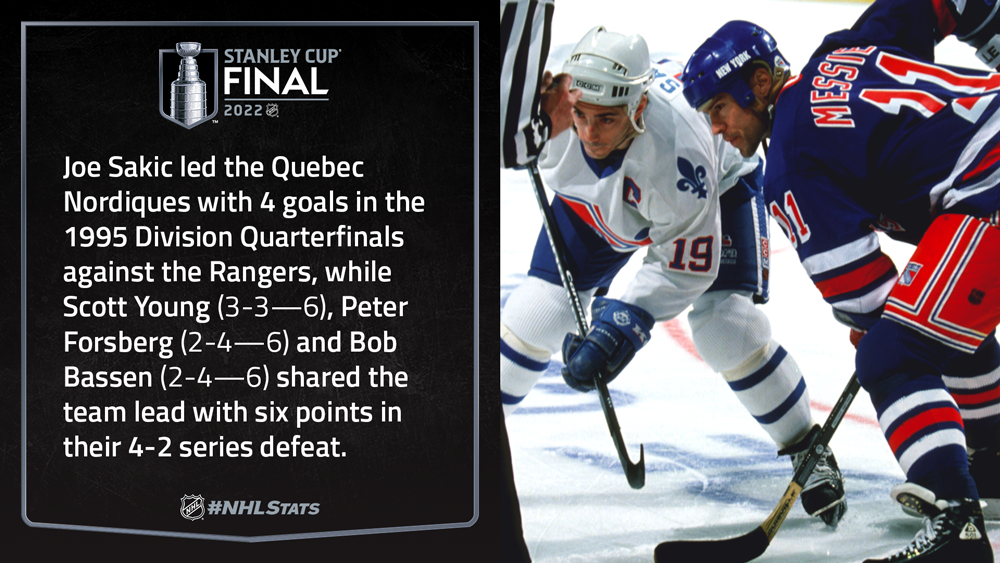