* For the first time in 21 years, the Colorado Avalanche are Stanley Cup champions as they staged yet another comeback win to defeat the two-time defending champion Tampa Bay Lightning in six games.

* Cale Makar became the youngest defenseman in 52 years – since Bobby Orr in 1970 – to claim the Conn Smythe Trophy.

* The Avalanche went 16-4 on their Cup run to finish with the second-fewest losses in a playoff year (tied) since the best-of-seven format was adopted for all rounds in 1987.

* Nathan MacKinnon tallied 1-1—2 in Game 6 to lead his team to victory and pull into a share of the NHL lead with 13 goals in 2022 – tied for the second-highest total in one postseason in franchise history.

* Acquired just ahead of the trade deadline and playing in his second straight Final against Tampa Bay, forward Artturi Lehkonen scored the Stanley Cup-clinching goal – after putting the club into the series with the Conference Finals clincher. He became the seventh player in NHL history to notch the series-clincher in the final-four and the Final in the same year.

* More #NHLStats from the Cup-clinching Game 6 are available in Live Updates, while a detailed look at Colorado’s championship run is included here.

AVALANCHE ON TOP OF HOCKEY WORLD ONCE AGAIN

For the first time in 21 years and third in franchise history, the Avalanche are Stanley Cup champions after staging their NHL record-tying 10th comeback victory of the 2022 postseason to halt the Lightning’s bid for a three-peat. Captain Gabriel Landeskog accepted the Cup – the fourth player born and trained outside North America to do so – and his first hand-off was to Erik Johnson, the longest-tenured member of the Avalanche’s Cup-winning roster.

* The Avalanche became the sixth team to win a Cup with four or fewer postseason losses since 1987 when the best-of-seven format was adopted for all rounds.

* The Avalanche concluded the postseason with a 9-1 record as visitors, tied for the fewest road losses by a Stanley Cup champion since 1987 – equaling the 2012 Kings and 1995 Devils, who each went 10-1 as visitors. The 2020 Lightning also went 10-1 in games where they were designated as the road team while playing in the neutral-site bubbles in Edmonton and Toronto.

* While Colorado never trailed in a series, they became the first team in NHL history to claim four series-clinching victories via a comeback win.

CALE MAKAR NAMED PLAYOFF MVP AFTER RECORD-SETTING POSTSEASON
After dazzling with his skill, wowing with his smooth skating and compiling more points in one playoff year than all but three defensemen in NHL history, Avalanche blueliner Cale Makar was named the 2022 Conn Smythe Trophy winner. Awarded to “the most valuable player to his team in the playoffs,” Makar was selected the winner in a vote by a panel of the Professional Hockey Writers Association.

* Makar claimed the Conn Smythe Trophy five days after receiving his first Norris Trophy. He became the third player in NHL history to win both awards in the same season, following Bobby Orr in 1970 (age 22) and 1972 (age 24) along with Nicklas Lidstrom in 2002 (age 32).

SAKIC SECURES FIRST STANLEY CUP AS GENERAL MANAGER, THIRD OF NHL CAREER
Twenty-six years after lifting his first Stanley Cup in the state of Florida, Avalanche general manager Joe Sakic hoisted the trophy for the third time and first as a GM. Wearing the “C” for each of Colorado’s previous titles, he is the first in League history to win a Cup with the same franchise as both a captain and general manager.

* Sakic is the third individual in NHL history to win a championship as both a player and general manager with the same franchise. He joined Serge Savard of the Canadiens (player: 8; GM: 2) and Milt Schmidt of the Bruins (player: 2; GM: 2). In addition, Lester Patrick won the Cup as Rangers GM three times, including in 1928 when he also tended goal for the club under emergency circumstances in Game 2 of the Final. 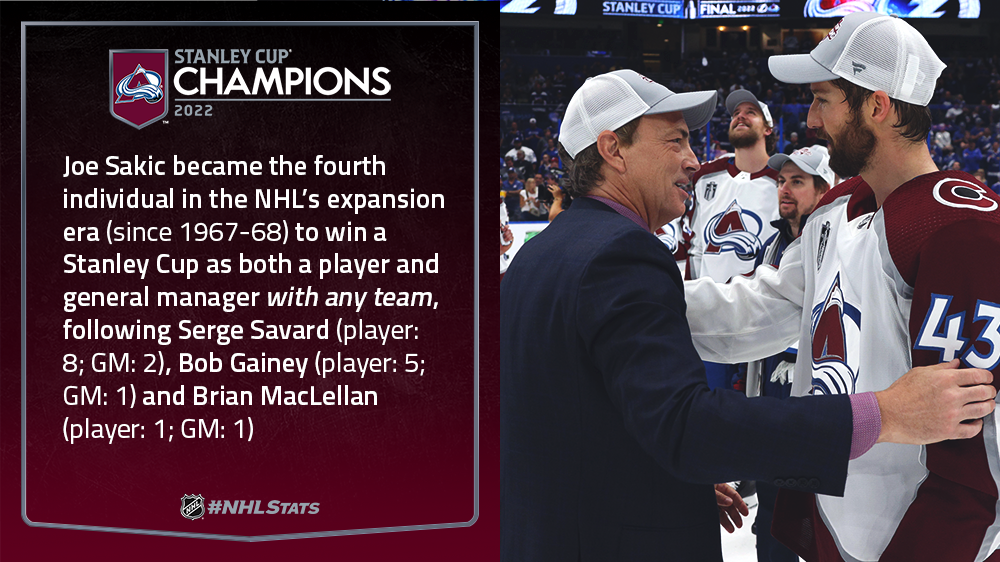 POWER PLAY PROPELS COLORADO THROUGHOUT POSTSEASON
The Avalanche power-play scored at a 32.8% clip during their Cup run, the highest rate on record (since 1977-78) in one postseason by a team that played at least 20 games. Colorado went 20-for-61 with the man advantage, the fourth-most power-play goals in one postseason in franchise history. 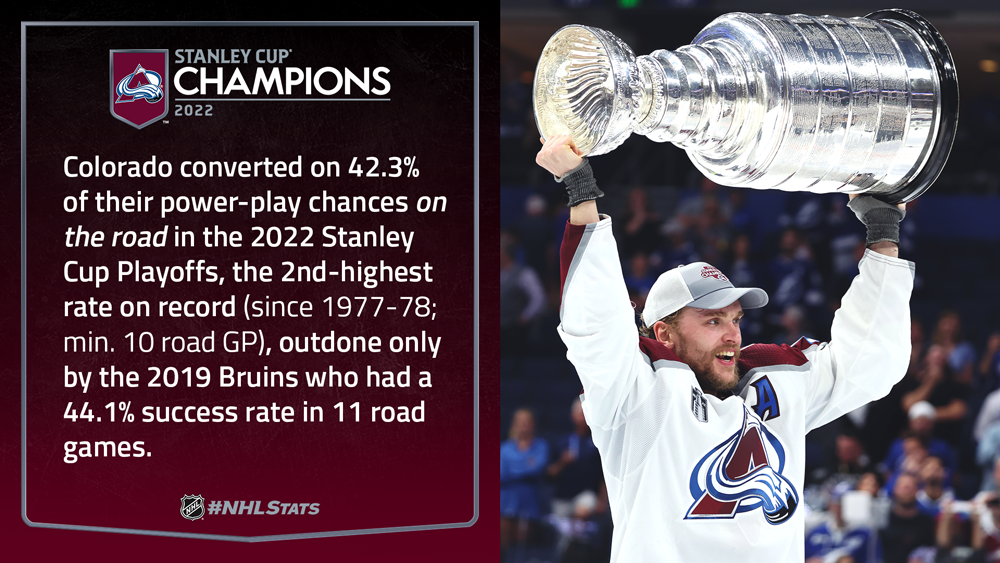 FROM WORST TO FIRST IN FIVE YEARS
Colorado captured its championship five years after finishing last place in the League standings with only 48 points during the 2016-17 season (22-56-4) – among the 10 lowest point totals in an NHL season of 82 or more games. Avalanche veterans Mikko Rantanen, Nathan MacKinnon, Gabriel Landeskog, Erik Johnson and J.T. Compher all skated with Colorado during that campaign.

* It was the second time the franchise has won a Cup within five years of a last-place finish, as the Quebec Nordiques ranked 21st in 1990-91 before the Avalanche lifted the trophy in 1995-96 (their first season in Denver). Overall, it has happened five times in the expansion era (since 1967-68). 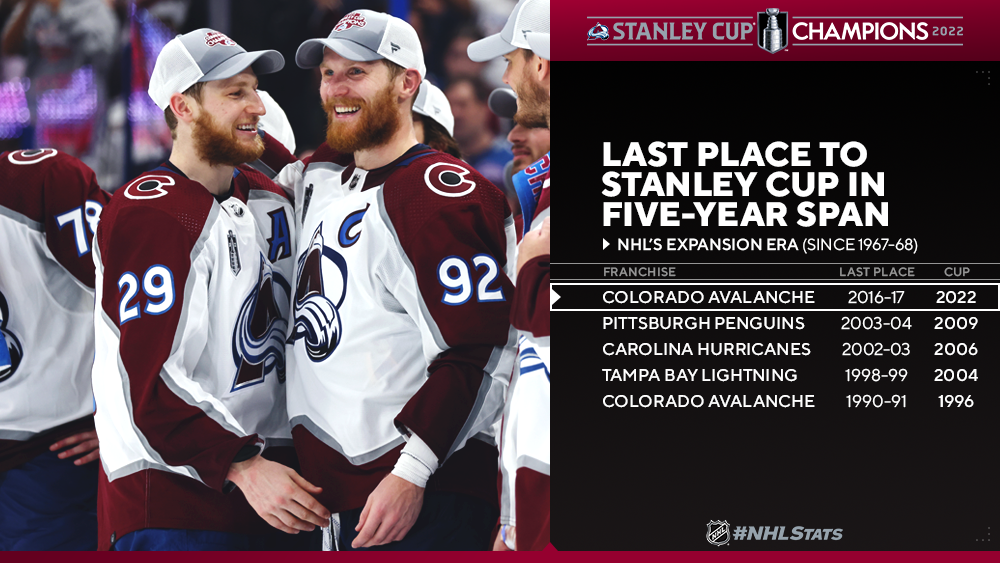 * Mikko Rantanen, Nathan MacKinnon and Gabriel Landeskog combined for 29-42–71 during the 2022 Stanley Cup Playoffs, while Cale Makar had a historic 29-point showing. Landeskog also became the fourth player in NHL history born and trained outside of North America to captain a Cup winner.

* Andrew Cogliano and Jack Johnson joined a rare list of players in NHL history to win their first Cup after appearing in 1,000 career regular-season games. Fellow veteran Erik Johnson, who was selected with the No. 1 overall pick in the NHL Draft over 16 years ago, also captured his first championship.

* Darren Helm and Andre Burakovsky won their second Stanley Cup, with Colorado becoming the 12th champions in the NHL’s expansion era (since 1967-68) with two or fewer previous winners and fourth in the last five years.