* Andrei Vasilevskiy has been a force for the Lightning when the series is at stake, holding opponents to two goals or fewer in three of four contests in which the club has faced elimination since 2020.

* Cale Makar ishaving one of best Final performances by a defenseman in decades with a point in each of the past four games, three multi-point outings and seven points over the first five contests.

* What happens when the top team at home meets the top team on the road, with the Stanley Cup in the building? We’ll find out Sunday as the Lightning (8-2 at home) will look to force Game 7 against the Avalanche (8-1 on the road).

A TALE AS OLD AS TIME (OR SINCE 2020): VASI UNSTOPPABLE FACING ELIMINATION
Andrei Vasilevskiy, a.k.a. “The Big Cat,”will skate in his fifth game while facing elimination since the start of his first championship run in 2020. Over that span, Vasilevskiy has been unbeatable when Tampa Bay’s season is at stake and nearly perfect when he can clinch a series.

* After amping up his teammates before Game 5, Vasilevskiy proceeded to make 35 saves and boost his stats in “must-win” games over the past three years to include a 1.33 goals-against average, .956 save percentage and one shutout.

* With his timely saves and laser focus, the reigning Conn Smythe Trophy winner has rebounded from losses in each of his first three career elimination games and now owns a 4-3 record in such contests (2.07 GAA, .926 SV%, 1 SO).

MAKAR AMONG HALL OF FAMERS IN PURSUIT OF FIRST STANLEY CUP
Cale Makar has continued to wow fans with hisoffensive production throughout the Stanley Cup Final, and dazzles even with his near misses. The 23-year-old has put his name alongside NHL greats like Paul Coffey, Brian Leetch and Al MacInnis – the only defensemen in NHL history with more points in one playoff year than Makar.

* Makar, who has a point in all but five of 19 playoff contests in 2022, collected his third multi-point showing of the Final in Game 5 and eighth overall this postseason. The only defensemen in NHL history with more multi-point games in one playoff year are MacInnis (10 in 1989), Leetch (9 in 1994) and Coffey (9 in 1985).

* Makar is the first defenseman with three multi-point games in the Final since Leetch in 1994. A blueliner has never had four such outings in the championship series.

* The Avalanche blueliner, who had five points in a series-clinching Game 4 victory during the Western Conference Final, is within striking distance of becoming the sixth defenseman in the past 60 years to finish as the top scorer in the playoffs (tied or outright). Since 1962, only Scott Niedermayer (2003 Devils; tied), Leetch (1994 Rangers), MacInnis (1989 Flames), Larry Robinson (1978 Canadiens; tied) and Orr (1972 Bruins; tied) have done so.

AMALIE Arena has been a comfort zone for the Lightning this postseason as they are 8-2 in Tampa, one shy of the franchise record for most home wins in one playoff year (9-3 in 2021, 9-4 in 2004). They enter Game 6 having been down this road before, needing a win to force Game 7 of the Stanley Cup Final.

* The club was successful in that endeavor 18 years ago when Martin St. Louis scored in double overtime of Game 6 at Pengrowth Saddledome in Calgary to send the 2004 Final back to Tampa, where the hosts ultimately hoisted its first Stanley Cup.

* The Lightning were not so fortunate seven years ago in the 2015 Final when they lost Game 6 on the road against the Blackhawks. Duncan Keith scored the Cup-clinching goal that night and claimed the Conn Smythe Trophy. Six players who were in the lineup for that loss remain with the Lightning: Alex Killorn, Ondrej Palat, Nikita Kucherov, Steven Stamkos, Victor Hedman and Andrei Vasilevskiy (DNP).

* The Lightning became the 10th team to win Game 5 on the road while facing a 3-1 series deficit in a Stanley Cup Final. Four of the previous nine clubs then won the next contest at home to force a winner-take-all showdown.

NOT AT HOME? NOT A PROBLEM FOR THE AVALANCHE
The Avalanche will have their second opportunity to clinch the Stanley Cup, but this time it will be on the road – a place they’ve been comfortable this postseason.

* Colorado is 8-1 as visitors in the 2022 Stanley Cup Playoffs with its only loss coming to Tampa Bay in Game 3. Should the Avalanche reign victorious in Game 6, their nine road wins would set a franchise record for most in a playoff year and finish as the second-highest total in NHL history behind six clubs with 10 (most recently the 2019 Blues).

* The Avalanche have earned nine comeback wins this postseason, which trails only the 2009 Penguins (10) for the most in a playoff year in NHL history. Colorado has had a come-from-behind victory to close out each of its previous three series in the 2022 Stanley Cup Playoffs and were close to another in Game 5 after notching two tying goals. 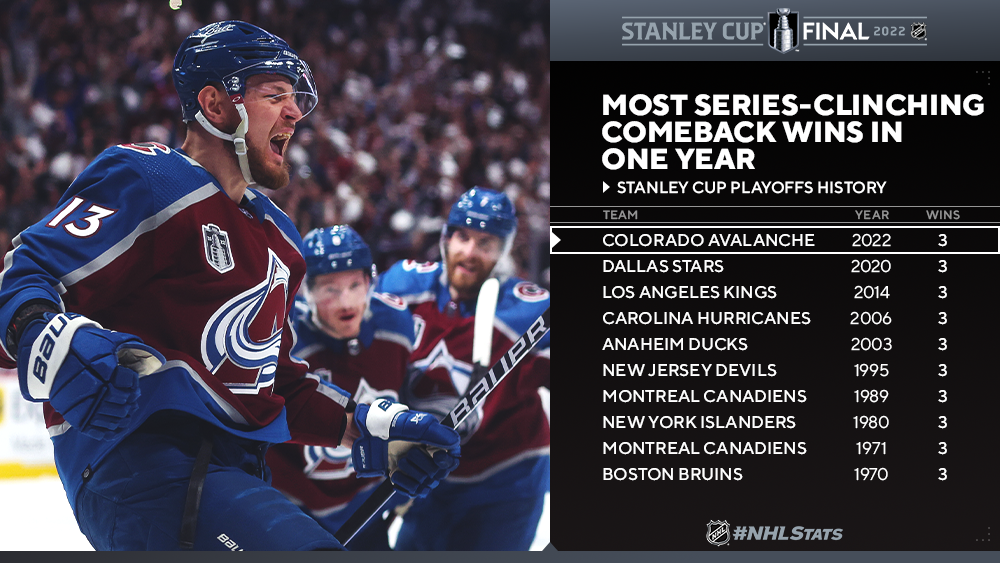