* In the first game in Stanley Cup Final history between teams riding active home and road winning streaks of seven or more games, respectively, it was the host Lightning that kept their run alive and claimed their first win of the series.

* Game 4 of the highest-scoring Stanley Cup Final in 40 years will be played Wednesday as the Lightning will vie for their ninth consecutive home win to send the series back to Denver tied 2-2.

* The 2022 NHL Awards show will air live tonight at 7 p.m. ET on ESPN, Sportsnet and TVA Sports. The one-hour show will include the presentation of five awards, the reveal of finalists for the Jim Gregory General Manager of the Year Award and recognition of Lane Hutson, who received the E.J. McGuire Award of Excellence during Game 3.

* Hilary Knight made her picks for the NHL Awards during a Twitter Takeover of @NHL for Game 3. 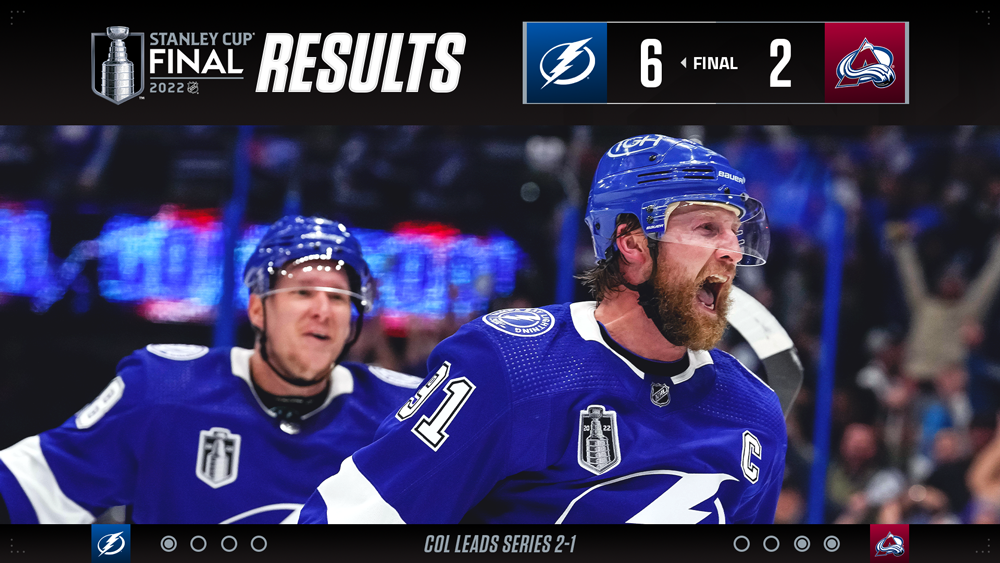 After surrendering a ninth consecutive Avalanche goal, the Lightning responded with three straight of their own and scored six times overall in Game 3 to cut their series deficit to 2-1.

* This is the highest-scoring Stanley Cup Final through three games in 40 years, with the 22 combined goals (COL: 13, TBL: 9) standing as the most since the Islanders outscored the Canucks 15-9 en route to a 3-0 series lead in 1982.

LIGHTNING REBOUND TO TAKE STANLEY CUP FINAL SWEEP OFF THE TABLE
After suffering two defeats in Denver – including a 7-0 decision in Game 2 – Tampa Bay rebounded to cut their series deficit to 2-1. This is the 23rd consecutive season that there will not be a sweep in the Stanley Cup Final, extending the longest such stretch in NHL history. The most consecutive World Series without a sweep is 12 (1977–1988) and the longest in the NBA/BAA Finals is also 12 (1947–1958).

* Palat gave the Lightning their first lead of the series at 14:54 of the first period (following 136:17 of playing time) and extended his home point streak to nine games (7-7—14) – the longest such run in franchise playoff history. Of note, Brayden Point had a point in nine straight games when the Lightning were designated as the home team while playing in the neutral-site bubbles in Edmonton and Toronto in 2020.

* Stamkos recorded his 25th career multi-point game in the postseason to surpass Martin St. Louis (24) for sole possession of second place in franchise history – the Lightning’s all-time list is topped by Kucherov, who had his 44th career multi-point performance Monday.

* Kucherov and Hedman have seven and six career multi-point games in the Stanley Cup Final, respectively. Kucherovsurpassed Sidney Crosby and Patrick Kane (both w/ 6) for sole possession of the most among active players in the championship series. Hedman, meanwhile, overtook Bobby Orr (5) and tied Larry Murphy for fourth place in NHL history for multi-point games in the Final among defensemen and now trails only Paul Coffey (8), Denis Potvin (7) and Doug Harvey (7).
* Perry became the first player in NHL history to score a goal in the Stanley Cup Final with four different franchises (also ANA: 2 G, DAL: 3 G & MTL: 1 G).

Tampa Bay claimed its eighth consecutive victory on home ice and the 54th overall by a home club this postseason, tied with 1990 for the fourth most in one year in Stanley Cup Playoffs history.

* This marks the 25th Stanley Cup Final in NHL history to begin with the home team winning each of the first three or more contests. The last such instance came in 2017 when the host won each of the first five.

* The Lightning became the second team this postseason to string together eight consecutive home wins – the first time in NHL history multiple clubs have achieved the feat in the same year.

Cale Makar (0-2—2) notched his second straight multi-point game and seventh overall this postseason as he assisted on both of Gabriel Landeskog’s goals (as did Mikko Rantanen).

* Makar and Rantanen each have 19 assists this postseason, the most by an Avalanche player in one playoff year since the club relocated to Denver in 1995-96 and tied with Peter Stastny for the franchise record (19 in 1985 w/ QUE).

Lane Hutson, the 25th-ranked North American skater for the 2022 Upper Deck NHL Draft, was presented the E.J. McGuire Award of Excellence during the second period of Game 3 in Tampa. First awarded in 2015, the award is presented annually by the League to a candidate who best exemplifies commitment to excellence through strength of character, competitiveness and athleticism.

* Hutson also will be recognized during the 2022 NHL Awards show, which will air live tonight at 7 p.m. ET on ESPN, Sportsnet and TVA Sports. Winners of the Hart Trophy, Vezina Trophy, Norris Trophy, Calder Trophy and Ted Lindsay Award will be unveiled during the one-hour live show, as well as the three finalists for the Jim Gregory General Manager of the Year Award.

* Canadiens, Senators to play in 2020 and 2021 Kraft Hockeyville games