* The 2022 Stanley Cup Final shifts to Tampa as the Avalanche, who have tallied 11 goals through the first two games, will look to move within one win of the championship.

* To three-peat, the Lightning will have to become the first team in NHL history to overcome a 2-0 series deficit to win back-to-back best-of-seven matchups.

LIGHTNING LOOK TO RALLY IN SECOND STRAIGHT SERIES
The two-time defending champion Lightning will look to climb back into the 2022 Stanley Cup Final as the series shifts to AMALIE Arena for Game 3. Tampa Bay, which was held off the score sheet in Game 2 for the first time since their opening game of the postseason, is 8-4 all-time in the playoffs after being shut out in the previous contest and is currently riding a franchise-record seven-game home winning streak.

* The Lightning will aim to become the third team in the past decade, and second this playoffs, to record eight straight home wins in the postseason. They would join the 2022 Rangers (8 GP) and 2013 Kings (8 GP).

* Andrei Vasilevskiy, who gave up a postseason career-high seven goals Saturday, will look to bounce back on home ice where he boasts a 7-1 record in the 2022 Stanley Cup Playoffs. Vasilevskiy is 19-13-1 in his career after allowing five-plus goals in the previous game, including a 4-2 record in the postseason.

* After losing twice on the road to open the Eastern Conference Final, the Lightning reeled off four straight wins to reach the Stanley Cup Final. To claim another title, they now will have to become the first team in NHL history to overcome a 2-0 series deficit to win in consecutive rounds.

* Should Tampa Bay come back to win, they would become the sixth team in Stanley Cup Final history to rally from a 2-0 series deficit to win the series – and first since the 2011 Bruins. 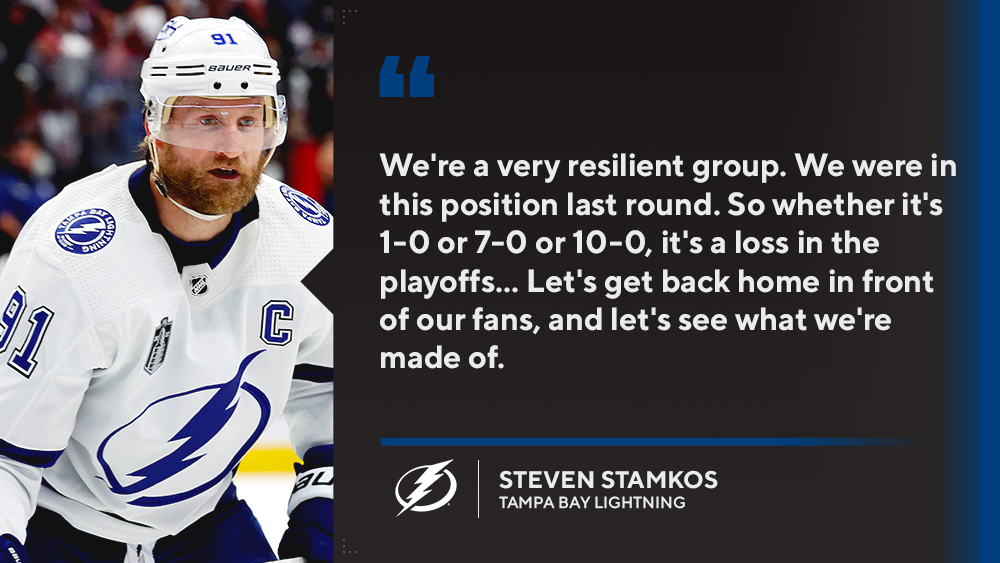 AVALANCHE HEAD TO TAMPA WITH MOUNTAIN OF GOALS

After scoring 11 goals across two games in Denver, the Avalanche head to Tampa looking to become the second team in as many years to take a 3-0 series lead in the Stanley Cup Final. A total of 15 players have found the score sheet for Colorado, including goal production from seven different skaters.

* Since 1987 when all rounds became best-of-seven, only one team has finished a postseason with fewer than four losses: the 1988 Oilers, who went 16-2 plus their no-decision in the suspended game during the Final (which was tied 3-3 when called), en route to their fourth championship in five years.

* Colorado has scored 76 goals in 16 games this postseason (4.75 G/GP), including 12 contests with four or more tallies. Their goals-per-game rate currently ranks fifth in Stanley Cup Playoffs history among clubs that played at least 16 games. 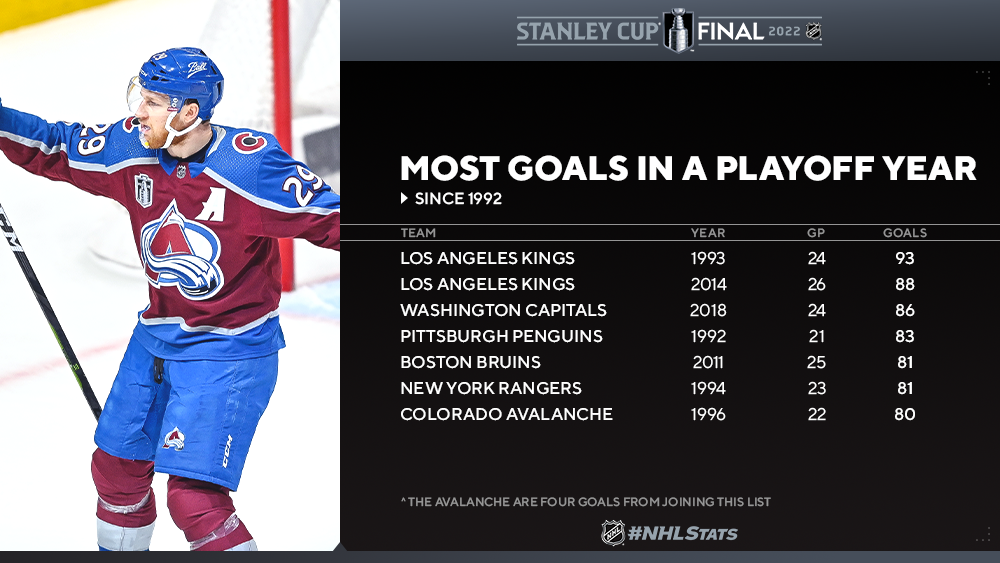 * Colorado’s 14-2 record during the 2022 Stanley Cup Playoffs includes a perfect 7-0 mark as visitors. The Avalanche can become the second team in NHL history with an eight-game road win streak in a postseason, joining the 2012 Kings (10 GP).

* Four of Colorado’s goals in the Final have come via special teams (3 PPG, 1 SHG). Overall, the club has scored on the man advantage in 11 of 16 games this postseason and tops all teams with a 32.7% power-play percentage. Since 1977-78, the first season that special teams percentages are available, only one club has ended a postseason with a higher success rate on the power play (min. 16 GP): the 1981 Islanders (37.8% in 18 GP).

2022 NHL AWARDS SET FOR TUESDAY
Five more NHL Awards will be handed out Tuesday in Tampa, between Game 3 and Game 4 of the Stanley Cup Final. The show will be broadcast live at 7 p.m. ET on ESPN, Sportsnet and TVAS, with host Kenan Thompson to be joined by a number of different presenters whose inspirational stories stirred the emotions of the NHL and beyond this season.

The three finalists are Auston Matthews, Connor McDavid and Igor Shesterkin. Matthews is seeking to become the first Toronto player to win in 67 years; McDavid is vying to become the ninth player in NHL history to take home the award at least three times; and Shesterkin is trying to become the third netminder on any team to win this century.

Vezina Trophy
The three finalists are Jacob Markstrom, Juuse Saros and Igor Shesterkin. Markstrom aims to become the second winner in Flames franchise history, following Miikka Kiprusoff (2005-06); Saros is seeking to join Pekka Rinne (2017-18) as the second netminder in Predators history to earn the Vezina; and Shesterkin is vying to become the third Rangers goaltender to win the Vezina under the current selection criteria (since 1981-82), joining Henrik Lundqvist (2011-12)and John Vanbiesbrouck (1985-86).

The three finalists are Victor Hedman, Roman Josi and Cale Makar. Hedman and Josi are both in search of their second Norris Trophy; and Makar, who is the fourth defenseman to be voted a finalist for an NHL Award in each of his first three seasons and won the Calder Trophy in his rookie campaign of 2019-20, is vying to become the first Norris Trophy winner in Avalanche/Nordiques history.

Calder Memorial Trophy
The three finalists are Michael Bunting, Moritz Seider and Trevor Zegras. Bunting is seeking to become the 11th player in Maple Leafs history to capture the Calder Trophy and just the second to do so in the NHL’s expansion era (since 1967-68), after Auston Matthews in 2016-17; Seider is vying to become the sixth player in Red Wings history to win the award and first since Roger Crozier in 1964-65; and Zegras is looking to become the first Ducks player to take home the award.

* BenKing, Ivan Zhigalov among 2022 NHL Draft prospects passed over in 2021