* Avalanche defensemen have played a pivotal part in Colorado’s run to the Stanley Cup in 2022 and are within reach of establishing single postseason franchise records when the puck drops for Game 2.

* Nikita Kucherov and Victor Hedman will look to help the Lightning tie the Stanley Cup Final at 1-1 after doing exactly that in 2015 and 2020.

* Denver’s own mega DJ/Producer GRiZ will perform on the Tivoli Quad at Auraria, near Ball Arena, before Game 2. The concert will start at 4:15 p.m. MT, with gates opening at 3 p.m. MT.

ALL THE SMALL THINGS ADDING UP FOR AVALANCHE DEFENSEMEN
Colorado received one assist from the blueline in Game 1, with Bowen Byram becoming the youngest player in franchise history to record a point in the Final. It was just the second time during the 2022 Stanley Cup Playoffs that Avalanche defensemen were held to one point or fewer (also Game 2 of R2 vs. STL).

* Colorado, who lead the NHL in goals (14), assists (43) and points (57) by defensemen this postseason, are within reach of setting new franchise benchmarks for each category in one playoff year. The club records for assists (46) and points (60) by defensemen were established in 1996, while the most goals (15) from the blueline came in 2001. 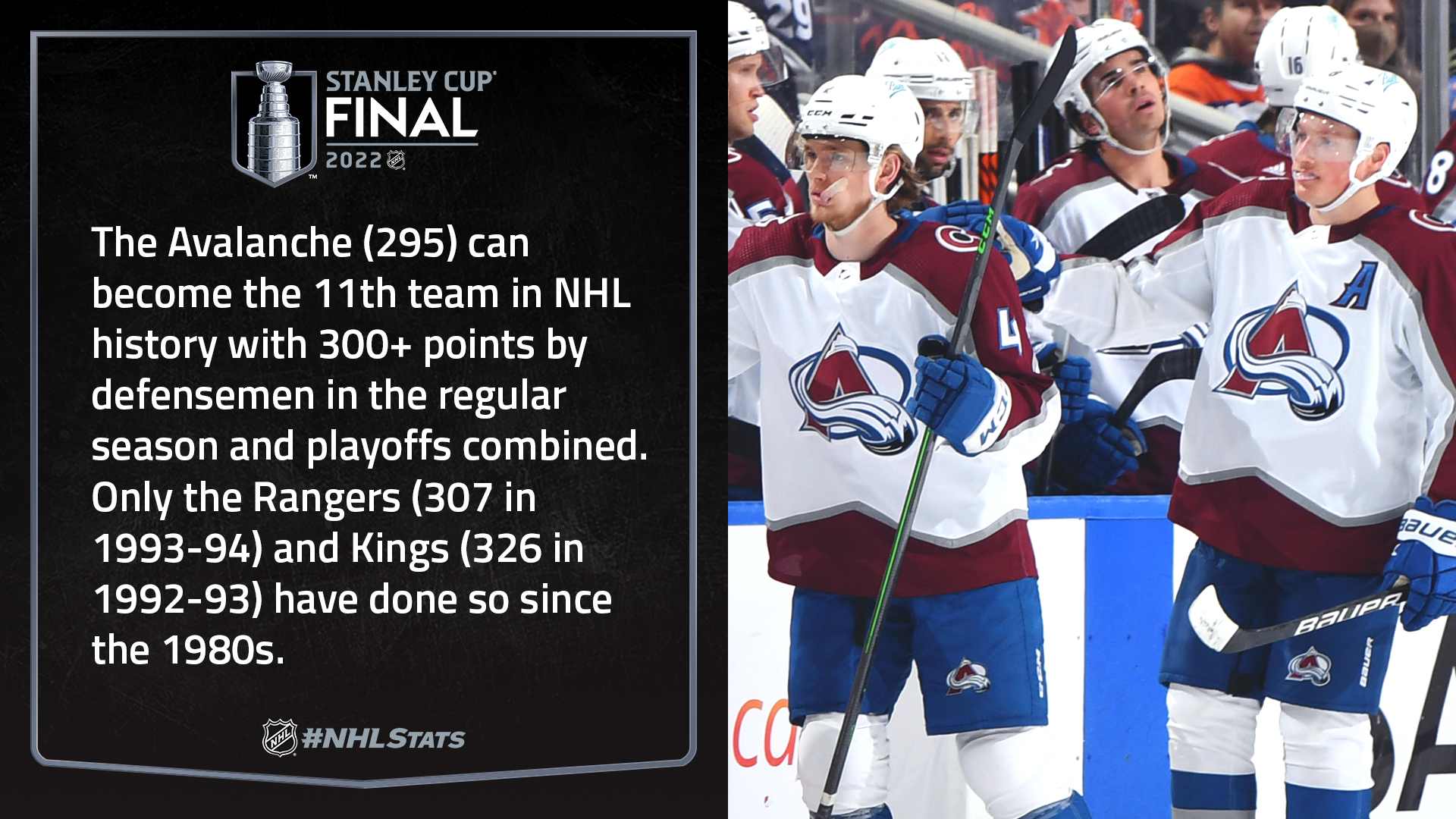 Tampa Bay has lost Game 1 of the Stanley Cup Final three times before 2022 and responded with a Game 2 victory to pull even in each of those series (2004, 2015 & 2020). They are seeking their 15th all-time win in the Final and currently sit tied for the second-most wins in the championship series over the past 25 years.

* Victor Hedman and Nikita Kucherov were key contributors in Game 2 of the Final in both 2020 and 2015 as Tampa Bay tied each series. Kucherov (1-3—4) and Hedman (0-4—4) notched two points apiece in each of those contests, with Hedman receiving the primary helper on the go-ahead, game-winning goal in 2015. 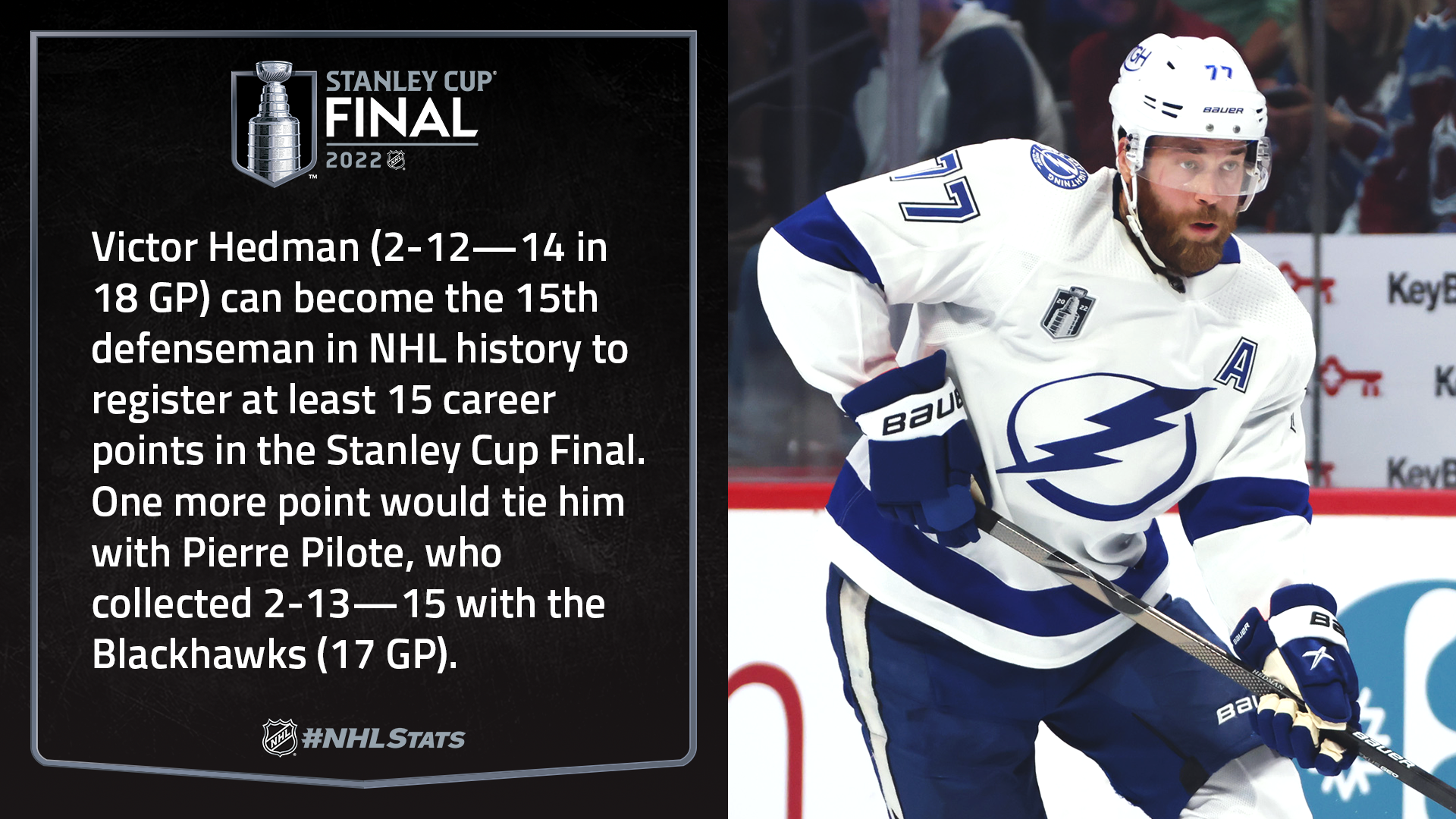 QUEST FOR THE STANLEY CUP CONTINUES

The latest episode of ‘Quest for the Stanley Cup’ is now available on ESPN+ in the United States as well as YouTube/NHL in Canada and showcases how the Lightning were able to exert their will on the Rangers with several of Jon Cooper’s motivational dressing room speeches.

NHL Fantasy on Ice (6/13):Jake Hahn explains the fantasy, DFS and betting angles for the Final

NHL Fantasy on Ice (6/16): Pete and Nick are joined by David Satriano of NHL.com

The Chirp (6/16): Daren talks to Bruce Boudreau about a coach’s perspective on Stanley Cup Final

* GRiZ to perform at watch party before Game 2