* Ondrej Palat scored another late game-winning goal to register a first in NHL history and lift the defending champs to within one victory of their third consecutive berth in the Stanley Cup Final.

* Three of the Lightning’s victories in the 2022 Stanley Cup Playoffs have come because of a go-ahead tally within the final two minutes of regulation – a feat only one other team in NHL history has accomplished in a single postseason.

LIGHTNING SCORE ANOTHER LATE GO-AHEAD GOAL, MOVE WITHIN ONE WIN OF FINAL
After Ondrej Palat scored a late game-winning goal in Game 3 (59:18) to give the Lightning their first win of the Conference Finals, he deflected Mikhail Sergachev’s shot past Igor Shesterkin with 1:50 remaining in regulation to lift Tampa Bay to their third straight victory and within one of their third consecutive berth in the Stanley Cup Final.

* Palat became the first player in Stanley Cup Playoffs history to score multiple game-winning goals during the final two minutes of regulation in a single postseason. Four other players have accomplished the feat within the final five minutes of regulation: Daniel Alfredsson (2 in 2002 w/ OTT), Mark Recchi (2 in 1991 w/ PIT), Mats Naslund (2 in 1985 w/ MTL), and Doc Romnes (2 in 1938 w/ CHI).

* Prior to each of Palat’s two game-winning goals in this Conference Finals series, the Lightning also received a late go-ahead tally from Ross Colton (59:56) during Game 2 of the Second Round against the Panthers. Tampa Bay became the second team in Stanley Cup Playoffs history to score three game-winning goals within the final two minutes of regulation in a single postseason, joining the 1995 Devils (Jim Dowd, 58:36 in Game 2 of SCF, Claude Lemieux, 59:15 in Game 5 of CF & Scott Stevens, 59:31 in Game 2 of CSF).

* Vasilevskiy, who’s allowed two or fewer goals in 47 of his 60 career playoff victories and one or fewer in 31 of those contests, required the fifth-fewest outings among goaltenders in NHL history to reach the benchmark. 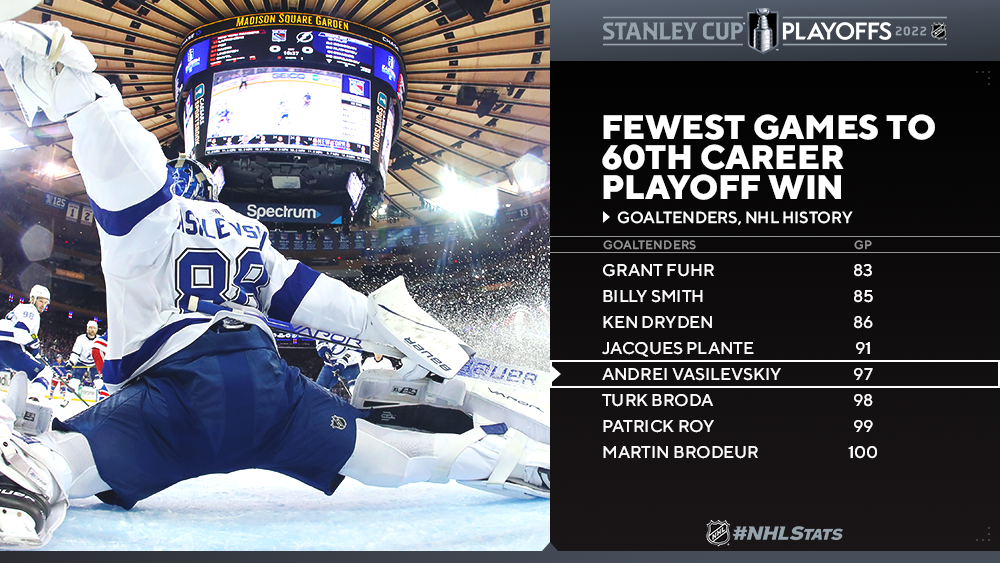 As the Avalanche await their opponent for the 2022 Stanley Cup Final we take a closer look at Cale Makar, who enters the championship series with a team-leading 22 points in 14 games (5-17—22).

* Makar has led the Avalanche on the ice in more ways than just his offensive production during this quest for the Stanley Cup, logging 27:05 time on ice per game played. It marks the highest such total among remaining players and slightly more than the next closest (Adam Fox: 26:42 TOI/GP). 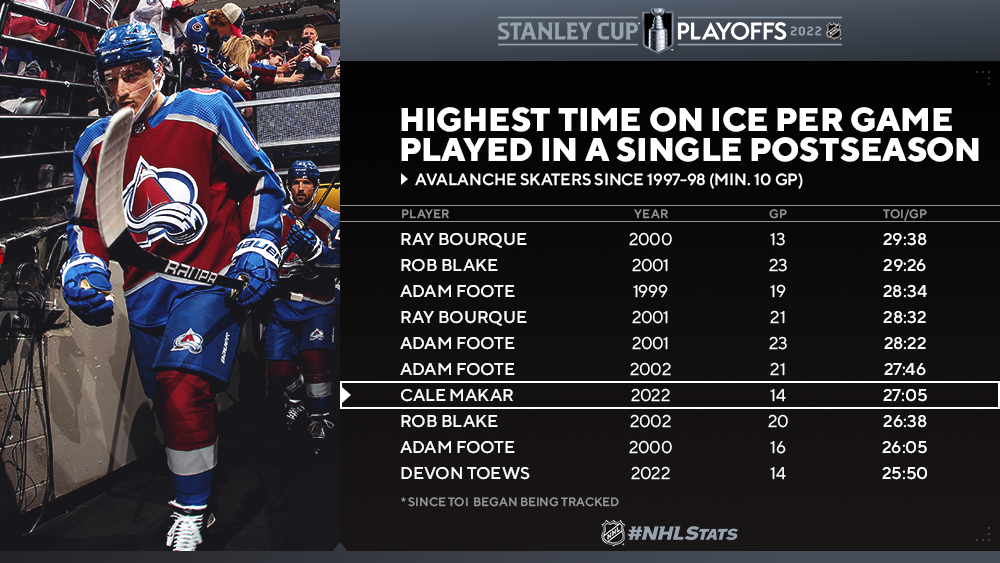