* Artturi Lehkonen scored an overtime goal to put the Avalanche into the Stanley Cup Final, 347 days after achieving the exact same feat for the Canadiens. His goal came 79 seconds into overtime – besting his tally last year by 20 seconds – and secured Colorado a spot in the championship series for the first time in 21 years.

* The Western Conference Final ended much like it began: with the stars shining. After their 8-6 opener last Tuesday, the Avalanche and Oilers combined for 10 different goal scorers in Game 4, including Cale Makar, Gabriel Landeskog, Mikko Rantanen, Nathan MacKinnon, Connor McDavid, Zach Hyman and Ryan Nugent-Hopkins – with Leon Draisaitl adding four assists to his League-leading total.

* Kyle Connor, who established career highs for goals, assists and points this season while recording just four penalty minutes, was named the winner of the 2021-22 Lady Byng Memorial Trophy.

* The Rangers and Lightning are set to clash in Game 4 of their Eastern Conference Final, with New York’s Chris Kreider and Tampa Bay’s Nikita Kucherov each in position to achieve a rare playoff feat after both finding the score sheet Sunday.

A six-goal third period in Edmonton saw Cale Makar (1-4—5) helpthe Avalanche erase a multi-goal deficit to take the lead with 5:13 remaining in regulation and Leon Draisaitl (0-4—4) and Connor McDavid (1-2—3) set up a Zach Kassian tying goal with less than four minutes to play to force overtime. The extra frame lasted only 79 seconds as Artturi Lehkonen (1-2—3) netted the ninth series-clinching overtime goal in Avalanche franchise history, putting the club into the 2022 Stanley Cup Final.

* Lehkonen became the second player in NHL history – and first in 83 years – to score an overtime goal to put his team into the Stanley Cup Final multiple times in his career (also Game 6 of 2021 SCSF w/ MTL). He put his name beside Gordie Drillon, who did so with the Maple Leafs in Game 3 of the 1938 Semifinals (a best-of-five series) and duplicated the achievement just over one year later in Game 3 of the 1939 Semifinals (a best-of-three series). 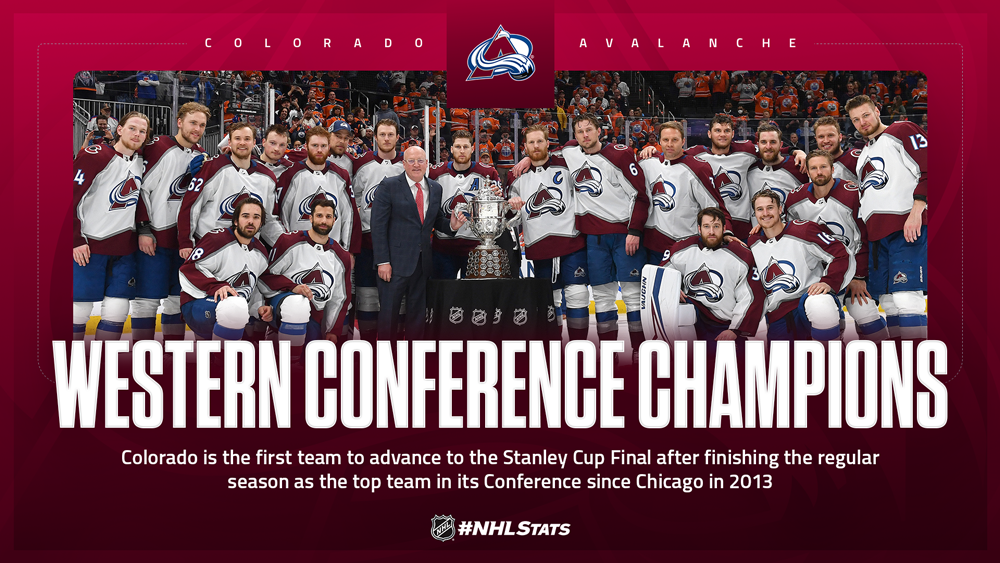 * The Avalanche are no strangers to erasing a deficit when it matters most in the 2022 Stanley Cup Playoffs, posting comeback wins to advance in every round. Only six other teams in NHL history have overcome a deficit to win each of their first three series-clinching games of a single playoff year: Dallas (3 in 2020), Carolina (3 in 2006), Anaheim (3 in 2003), Montreal (3 in 1989 & 1971) and Boston (3 in 1970). Only the Stars and 1971 Canadiens also achieved all three contests on the road. 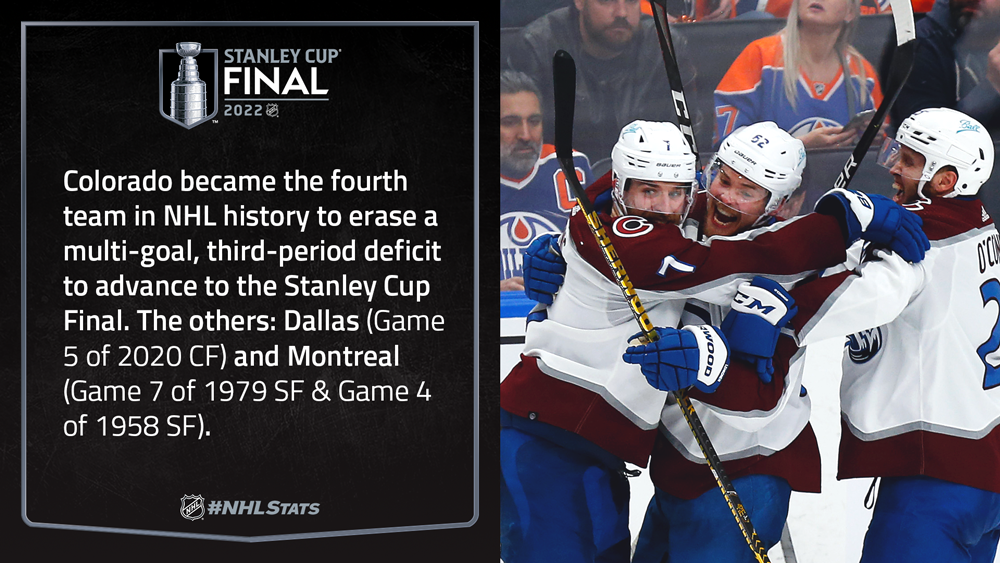 MAKAR MAKES HISTORY WITH FIVE POINTS IN CLINCHING GAME
Twenty-three-year-old Cale Makar made history Monday by putting up five points, an unprecedented performance by a defenseman in a potential series-clinching game and two points shy of Wayne Gretzky’s NHL record for any skater in that situation. Makar also matched the franchise record for points by any player in any playoff game and set new Avalanche benchmarks for assists and points by a defenseman in one playoff year.

* Makar became the eighth different player in NHL history – and first in 35 years – to put his team into the Stanley Cup Final with a five-point showing. Makar (23 years, 219 days) is the second-youngest player to do so, following Maurice Richard (22 years, 239 days)in 1944 – the first of two such performances by the former NHL all-time goals leader. 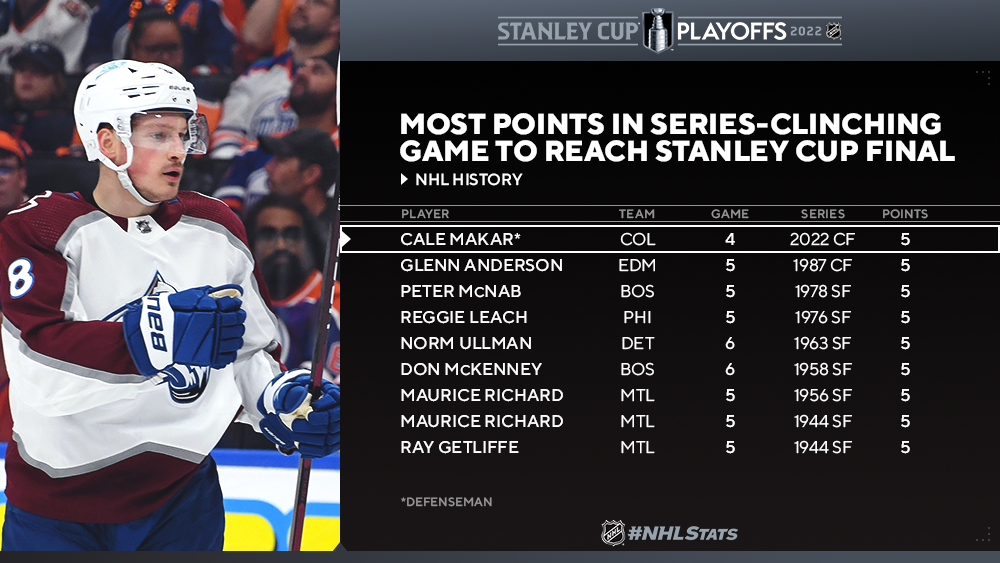 McDAVID, DRAISAITL CONCLUDE A POSTSEASON TO REMEMBER
Connor McDavid (1-2—3) and Leon Draisaitl (0-4—4) added to their lengthy lists of notable performances this postseason and nearly helped the Oilers force a Game 5. The duo concluded the 2022 Stanley Cup Playoffs with a combined 65 points in 16 games (McDavid: 10-23—33; Draisaitl: 7-25—32) and became the ninth set of teammates in NHL history to each reach 30-plus points in the same postseason.

* Draisaitl, who became the first skater in Oilers history to record four assists in a game when facing elimination, fell one shy of the most by any player in NHL history in that situation (Doug Gilmour: 0-5—5 in Game 5 of 1986 DSF w/ STL).

* Game 4 also marked the seventh time Draisaitl collected three or more points in a contest this postseason, becoming just the second player in NHL history to register as many in a single playoff year – Wayne Gretzky accomplished the feat on three separate occasions: 1985 (9 GP), 1988 (8 GP) and 1993 (7 GP). 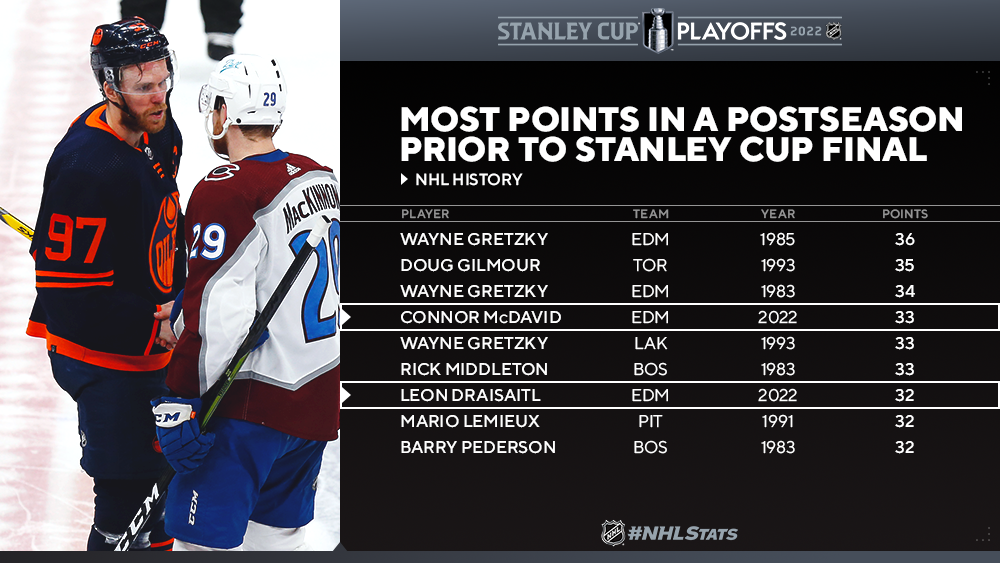 * Colorado (12-2) became the eighth team since 1987 (when all rounds became a best-of-seven) to suffer only two losses on route to clinching a berth into the Stanley Cup Final.

* The Avalanche have yet to face either of their potential Stanley Cup Final opponents, the Rangers or the Lightning, in the playoffs since relocating to Denver in 1995-96. However, their last series as the Quebec Nordiques was against the Rangers in the 1995 Conference Quarterfinals (a six-game triumph for New York, the defending Stanley Cup champions).

CONNOR CLAIMS 2021-22 LADY BYNG MEMORIAL TROPHY
Jets forward Kyle Connor was named winner of the 2021-22 Lady Byng Memorial Trophy, given annually “to the player adjudged to have exhibited the best type of sportsmanship and gentlemanly conduct combined with a high standard of playing ability.” He was presented with the award by Tanya and Lucie Bossy, the daughter and wife of the late Mike Bossy, who won the award three times. Click here to read more about Connor’s season and here for full voting results. 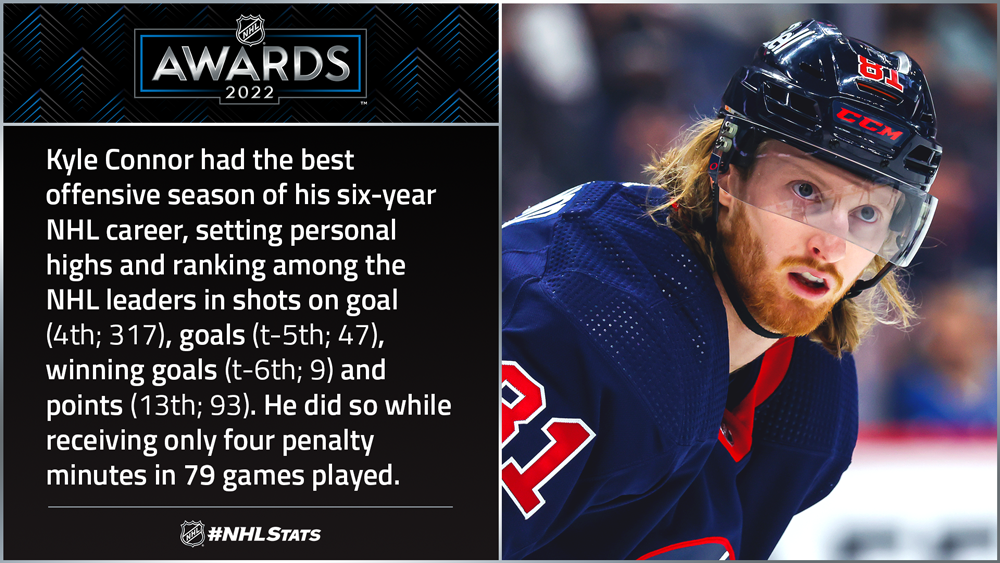 * Avalanche to play Rangers or Lightning in Stanley Cup Final

LIGHTNING LOOK TO EVEN EASTERN CONFERENCE FINAL IN GAME 4 TUESDAY
Tampa Bay looks to pull even in its Eastern Conference Final series with New York during Game 4 at AMALIE Arena on Tuesday. 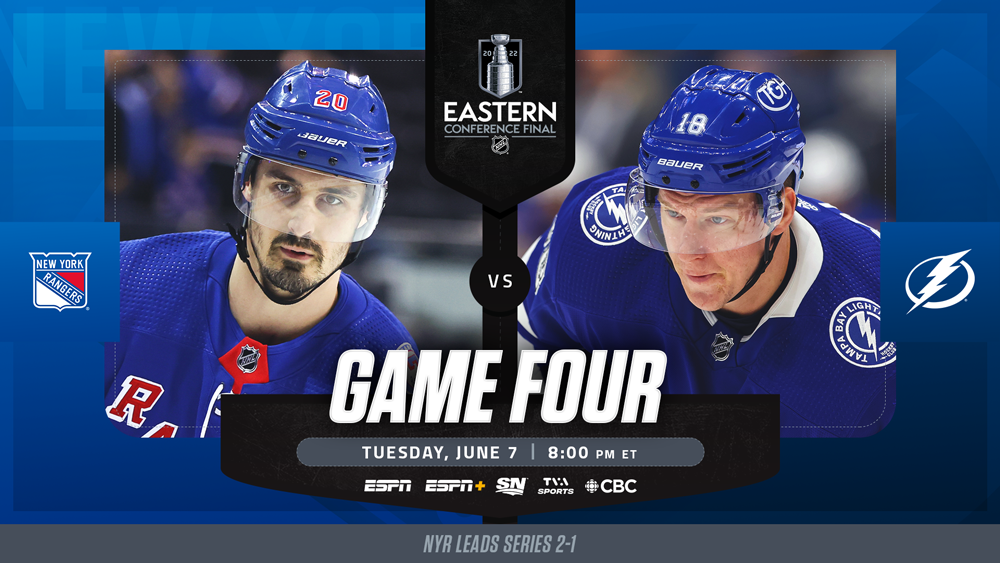 * Chris Kreider scored the 34th playoff goal of his NHL career Sunday to move into a tie with Rod Gilbert for the most in Rangers history.Kreider can become the first player to take the outright postseason goals lead for an Original Six franchise since 2004, when Steve Yzerman scored in Game 6 of the Conference Quarterfinals to reach 68 career playoff tallies and pass Gordie Howe for sole possession of first place on the Red Wings’ all-time list.

* Ondrej Palat scored the go-ahead goal in the final minute of regulation during Game 3 to cut the Lightning’s series deficit to 2-1, with Nikita Kucherov collecting the primary assist via a highlight-reel, no-look pass to his longtime teammate. Kucherov (2-3—5) has factored on each of Tampa Bay’s past five goals.