* J.T. Compher became the ninth different skater to score a game-winning goal for the Avalanche in the 2022 Stanley Cup Playoffs and propelled Colorado to within one victory of advancing to the Final.

* Noel Acton, founder of the Tender Bridge Foundation that has supported more than 500 boys and girls in East Baltimore for 20 years, was named winner of the 2021-22 Willie O’Ree Community Hero Award presented by MassMutual.

* The Eastern Conference Final between the Rangers and Lightning shifts to the Sunshine State for Game 3 on Sunday, with the visitors looking to move within one win of their first Stanley Cup Final appearance since 2014.

COMPHER CONTINUES SCORING WAYS, LIFTS AVALANCHE TO WITHIN ONE WIN OF FINAL
Valeri Nichushkin’s second career multi-goal playoff performance gave the Avalanche a lead, but Ryan McLeod helped the Oilers tie the contest in the third period before J.T. Compher’s first career game-winning goal in the postseason nearly five minutes later lifted Colorado within one win of its first berth in the Stanely Cup Final since 2001.

* After going without a goal through his first nine games of the 2022 Stanley Cup Playoffs, Compher netted his fifth in four games and sits tied with Mikko Rantanen for the most among all players in the Western Conference Final (3 G). Compher became the ninth different Colorado player to score a game-winning goal this postseason, which trails only 2001 (11) for the most in a single playoff year in Avalanche/Nordiques history.

* A day removed from celebrating his 32nd birthday, Pavel Francouz (27 saves) extended his personal win streak to five games – one shy of the longest such run in Avalanche/Nordiques history, shared by Mario Gosselin (6 GP in 1987 w/ QUE) and Philipp Grubauer (6 GP in 2021 w/ COL). 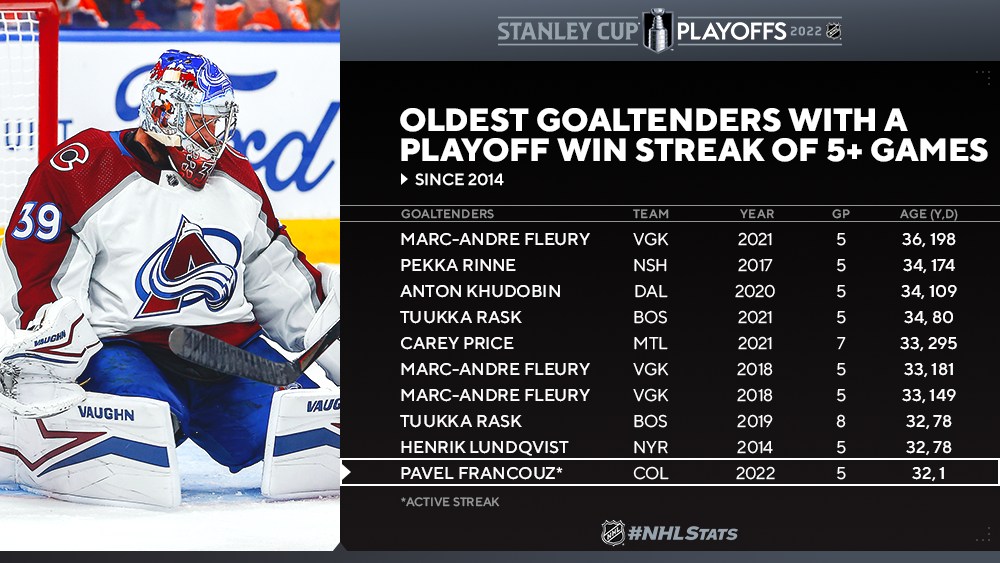 McDAVID BECOMES FIRST PLAYER TO REACH 30 POINTS IN 2022 STANLEY CUP PLAYOFFS
Connor McDavid (0:38)netted the fastest goal to begin a Conference Finals/Semifinals game in Oilers history to boost his 2022 Stanley Cup Playoffs totals to 9-21—30 (15 GP). He became the sixth differentplayer in franchise history to post 30 points in a postseason and the first in 32 years – Mark Messier and Craig Simpson each had 31 points in 1990 en route to Edmonton’s most recent Stanley Cup championship. 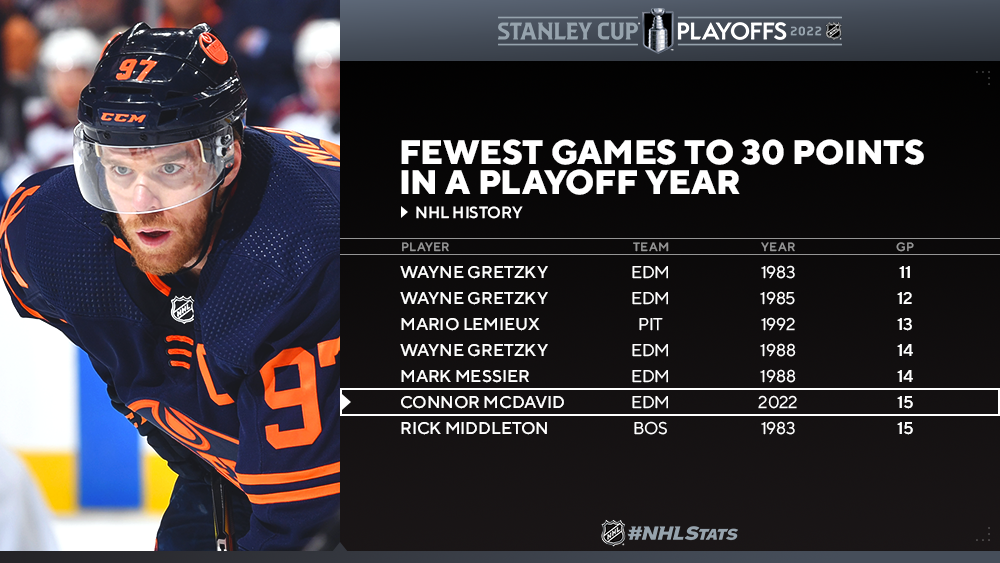 NOEL ACTON NAMED WILLIE O’REE COMMUNITY HERO AWARD WINNER
Noel Acton of Baltimore, Md., was named winner of the 2021-22 Willie O’Ree Community Hero Award presented by MassMutual, given annually “to an individual who – through the game of hockey – has positively impacted his or her community, culture or society.” Click here to read more. 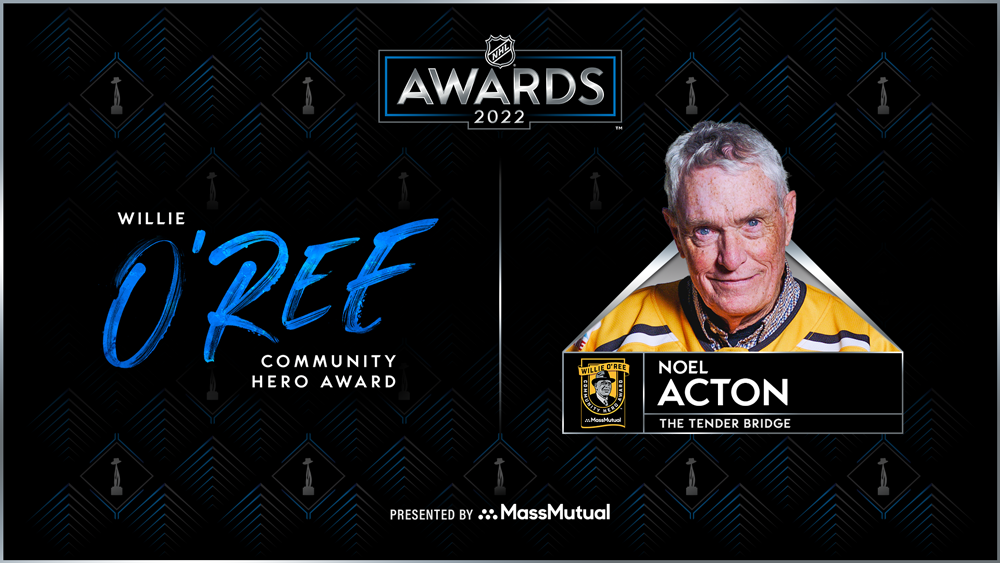 * The winner of the 2021-22 Frank J. Selke Trophy will be revealed Sunday. Panthers captain Aleksander Barkov, Bruins captain Patrice Bergeron and Flames forward Elias Lindholm are the three finalists for the award, given annually “to the forward who best excels in the defensive aspects of the game.”

2022 NHL SCOUTING COMBINE CONCLUDED WITH FITNESS TESTING SATURDAY
The 2022 NHL Scouting Combine™ presented by adidas, featuring 85 draft-eligible players from North America and Europe, concluded Saturday with fitness testing in Buffalo. Top 25 results from each test can be found at this link.

* Teammates Cutter Gauthier (No. 3-ranked N.A. Skater) and Logan Cooley (No. 2-ranked N.A. Skater) finished atop the ranks on the bikes in the Peak Power Output category during the Wingate Cycle Ergometer Test. Last season, the pair played on USA Hockey’s National Team Development Program Under-18 team with Gauthier concluding the campaign second on his team in goals with 34, while Cooley finished first in points per game (1.47 P/GP). 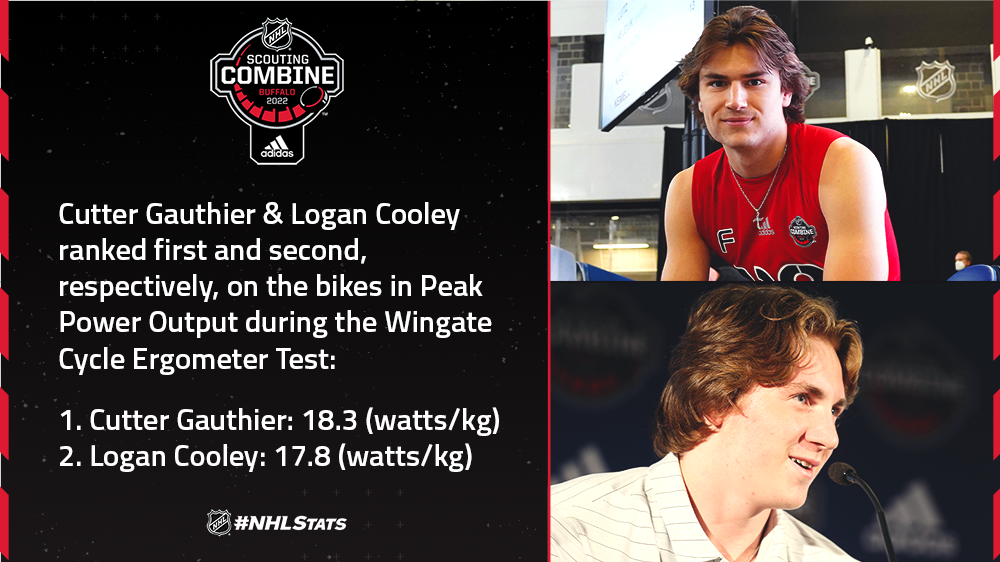 NEW YORK AIMS FOR 3-0 SERIES LEAD AS EASTERN CONFERENCE FINAL SHIFTS SOUTH
The Eastern Conference Final between the Rangers and Lightning moves to AMALIE Arena for Game 3 on Sunday, with New York looking to claim a 3-0 series lead and climb within one win of its 12th Stanley Cup Final appearance in franchise history. 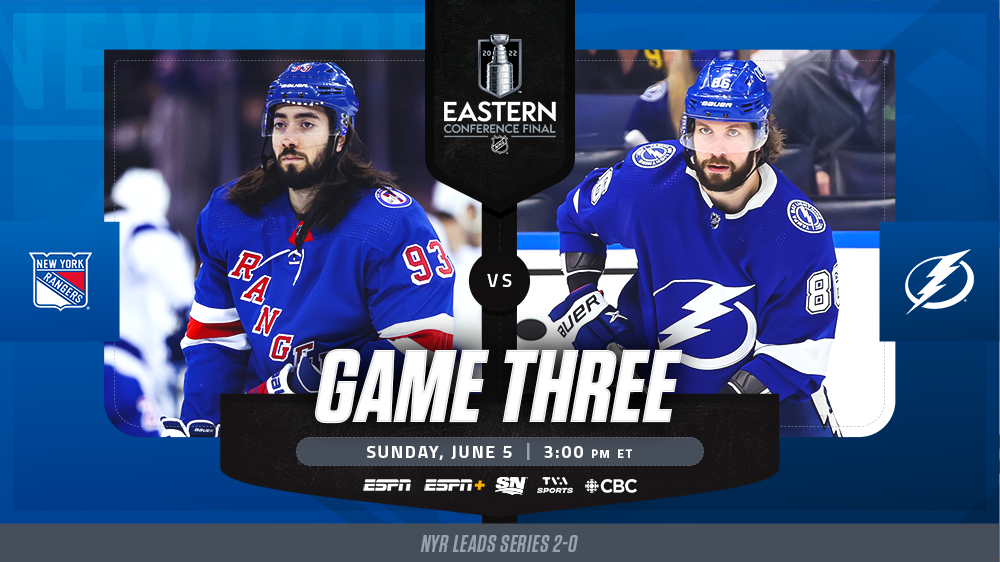 * Mika Zibanejad (9-13—22 in 16 GP) shares the team lead with nine goals this postseason, which includes scoring six during his active seven-game point streak. Zibanejad and co-leader Chris Kreider (9-5—14 in 16 GP) can become the fifth and sixth players in franchise history with a double-digit goal total in a playoff year and first since Wayne Gretzky in 1997 (10-10—20 in 15 GP).

* Nikita Kucherov (5-12—17 in 13 GP), who leads the Lightning in scoring during the 2022 Stanley Cup Playoffs, is three points shy of reaching 20 for a third straight postseason. He can become the ninth different player in NHL history with 20 points in three or more consecutive playoff years and first since Sergei Fedorov, whose run of four straight postseasons ended in 1998.