* Adam Fox and Mika Zibanejad now trail only Brian Leetch and Mark Messier on the Rangers’ list for most points in a single postseason after each contributing in the club’s eighth consecutive home win.

* Igor Shesterkin kept his home winning streak intact to help New York become the second team in the past eight years to pull ahead 2-0 in a series against the defending Stanley Cup champions.

* Canadiens goaltender Carey Price received the Bill Masterton Memorial Trophy, the third NHL Award presented this week with more to come over the next four days.

* The Western Conference Final between the Oilers and Avalanche shifts north of the 49th parallel for Game 3 on Saturday with the visitors looking to move within one win of their first Stanley Cup Final appearance in over 20 years.

FOX, ZIBANEJAD PROPEL RANGERS TO ANOTHER WIN ON BROADWAY
Adam Fox (0-2—2) and Mika Zibanejad (1-0—1) each found the scoresheet to extend their respective streaks Friday as the Rangers earned their eighth straight home win in front of another raucous crowd at Madison Square Garden.

* New York snapped Tampa Bay’s run of 17 straight wins following a loss within a playoff year, which dated to 2020 – ending a stretch of 60 consecutive postseason games without back-to-back defeats, the longest in NHL history (previous: 39 GP by MTL from 1976 to 1978).

* Fox, who extended his home point streak to nine games (3-10—13), recorded his fourth consecutive multi-point outing and his sixth overall of the 2022 Stanley Cup Playoffs. He passed Brian Leetch (3 GP in 1992 & 1995) for the longest multi-point streak by a defenseman in Rangers playoff history. 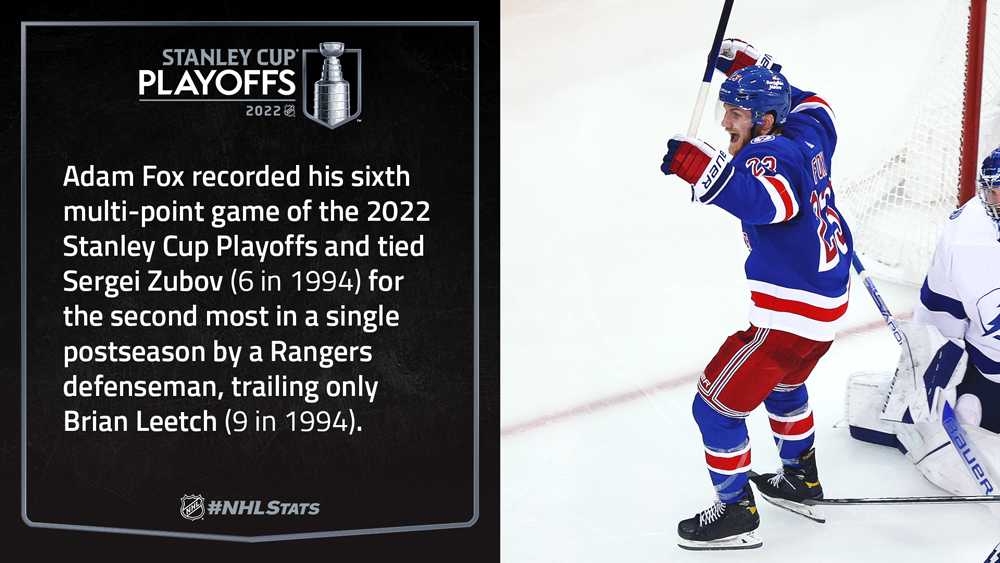 SHESTERKIN FEELING RIGHT AT HOME AT WORLD’S MOST FAMOUS ARENA
With the “No Quit in New York” crowd behind him yet again, Igor Shesterkin made 29 saves – including 24 consecutive stops after allowing an early power-play goal – to back the Rangers to their first 2-0 series lead since the 2014 Conference Finals (4-2 W vs. MTL).

* Shesterkin recorded his NHL-leading 10th victory of the 2022 Stanley Cup Playoffs, eight of which have come at home where he has allowed two goals or fewer in five consecutive games. Overall this postseason, he owns a 2.04 goals-against average and .948 save percentage at MSG. 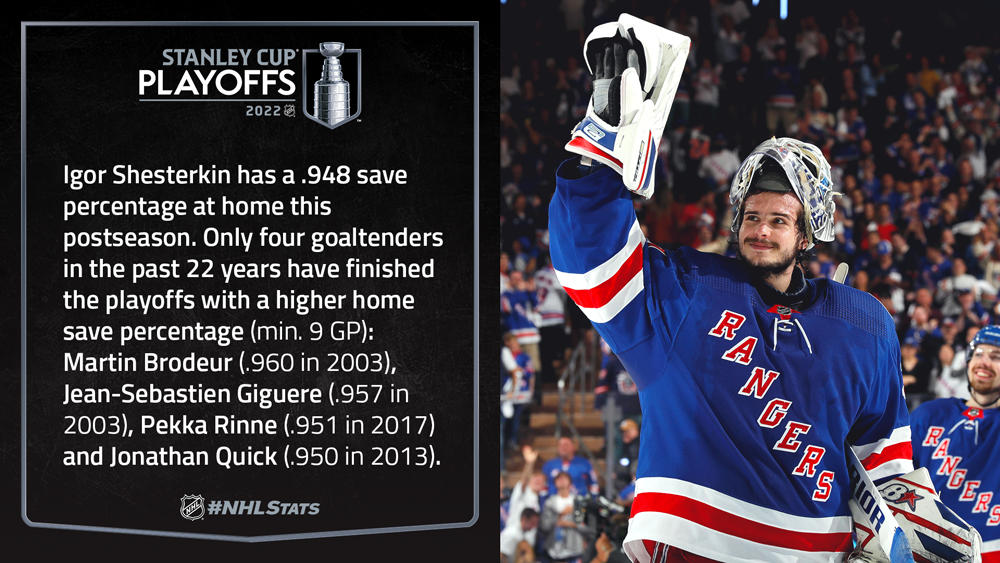 RANGERS HEAD TO TAMPA WITH OPPORTUNITY TO REACH FINAL

After facing a multi-game deficit in both the First and Second Round this year, the Rangers have turned the tables in the Conference Finals by claiming the first two games against the Lightning.

* The Rangers are the 25th team in NHL history to take a 2-0 series lead against the defending champions in a best-of-seven and just the second over the past eight years, following the Canucks in the 2020 First Round (4-2 W vs. STL). Clubs that do so own a series record of 17-7, with two of those rallies by the reigning champion coming in the past four such series.

* The Rangers became the first team since 2019 to defeat Tampa Bay in consecutive playoff games, ending their 17-0 stretch of responding to a loss with a win. Rangers forward Artemi Panarin, who was with the Blue Jackets when they swept the Lightning three years ago, improved to a perfect 6-0 in his playoff career against the club.

* The Rangers own an 8-1 record this postseason at Madison Square Garden, where their lone defeat came in triple-overtime in their opener. Since all rounds became best-of-seven in 1987, only two clubs have reached the Stanley Cup Final without posting a regulation loss at home along the way: the 1988 Oilers (8-0) and 2003 Devils (9-1; loss was in OT). Both of those clubs won the Stanley Cup.

* The winner of the fifth annual Willie O’Ree Community Hero Award presented by MassMutual will be revealed Saturday. Noel Acton (Baltimore, Md.), Ryan Francis (Cole Harbour, N.S.) and Meredith Lang (Minneapolis, Minn.) are the three finalists for the award, given “to an individual who – through the game of hockey – has positively impacted his or her community, culture or society.” 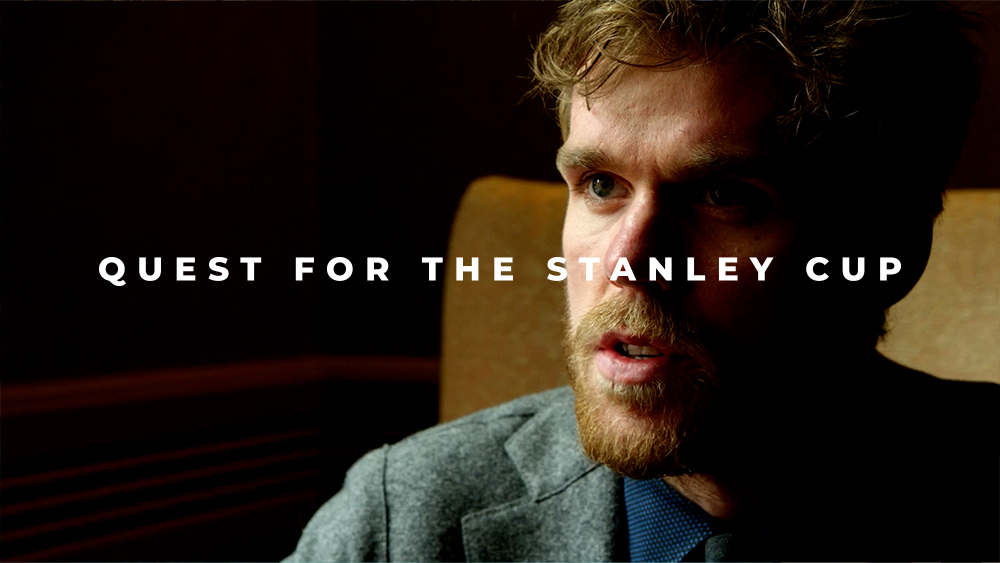 WESTERN CONFERENCE FINAL MOVES TO ROGERS PLACE FOR GAME 3
The Western Conference Final between the Oilers and Avalanche shifts to Edmonton for Game 3 on Saturday, with Colorado looking to claim a 3-0 series lead and move within one win of its first Stanley Cup Final appearance since 2001.

* Zach Hyman (9-4—13 in 14 GP) can become the second Oilers player with a double-digit goal total in the 2022 Stanley Cup Playoffs – he would join Evander Kane (13-4—17 in 14 GP). The last postseason where Edmonton had multiple 10-goal scorers was in 1990, when Craig Simpson, Esa Tikkanen, Jari Kurri and Glenn Anderson reached double digits en route to winning the franchise’s most recent Stanley Cup.

* Nazem Kadri (1-3—4 in 2 GP), who skated 252 games alongside Hyman with Toronto (240 regular season, 12 playoffs), shares the series lead with four points in the Western Conference Final including three assists in a 124-second span during Game 2. Kadri (15-18—33 in 29 GP) has collected 33 points in 29 playoff games since being traded to the Avalanche by the Maple Leafs on July 1, 2019 (a deal which also included current Oilers defenseman Tyson Barrie). 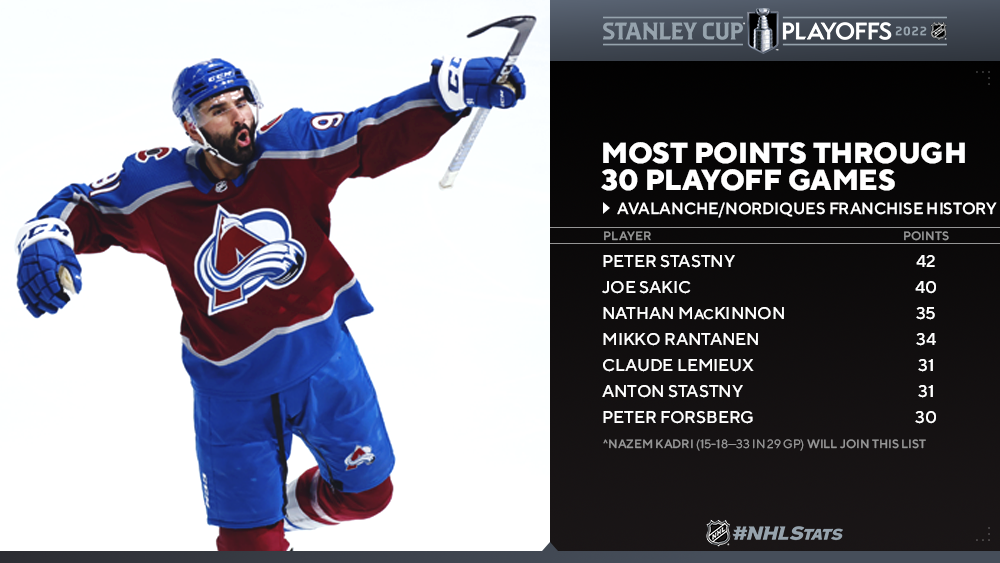