* Alex Ovechkin once again climbed multiple NHL all-time lists, this time with his ninth career 50-goal season and yet another multi-goal outing.

* Connor McDavid reclaimed the lead in the 2021-22 Art Ross Trophy Race and reached the 70-assist mark for the fourth time in his career – the first active player to do so.

OVECHKIN TIES NHL RECORD WITH NINTH CAREER 50-GOAL SEASON
Alex Ovechkin (2-1—3) scored goals No. 49 and 50 on the season to climb multiple all-time lists, cementing himself next to some of the greatest scorers in NHL history:

* With his first marker, Ovechkin surpassed Teemu Selanne (48 in 2006-07) for the most goals in a single season by an NHL player age 36 or older.

* Ovechkin reached the 50-goal mark with his second of the game – the ninth 50-goal campaign of his career. No other active skater has more than two (Leon Draisaitl & Steven Stamkos: 2). Ovechkin also boosted his 2021-22 totals to 50-40—90 (75 GP) for his sixth career 90-point season, matching Connor McDavid and Sidney Crosby for the most among active players. 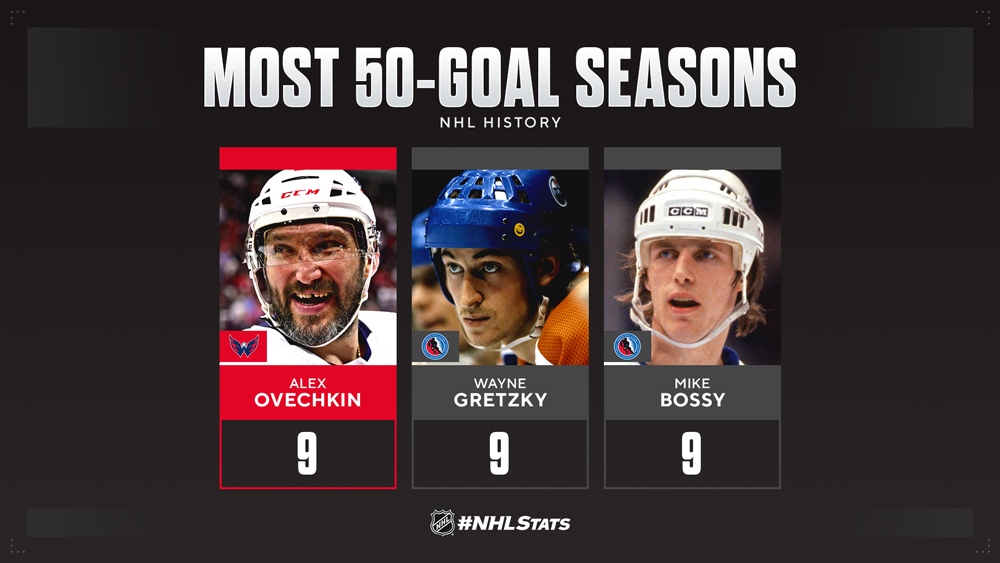 * The Capitals captain secured his 158th career multi-goal game, which tied Brett Hull for the second most in NHL history behind Wayne Gretzky (189).

McDAVID HITS 70-ASSIST MILESTONE AS OILERS EXTEND HOME POINT STREAK
Connor McDavid (1-2—3) hit the 70-assist mark for the fourth time in his career while Mike Smith (34 saves) posted his seventh straight win to help the Oilers extend their home point streak to 12 games dating to March 9 (11-0-1). Edmonton (45-26-6, 96 points) built a four-point cushion over idle Los Angeles (41-27-10, 92 points) for second place in the Pacific Division with a game in hand. 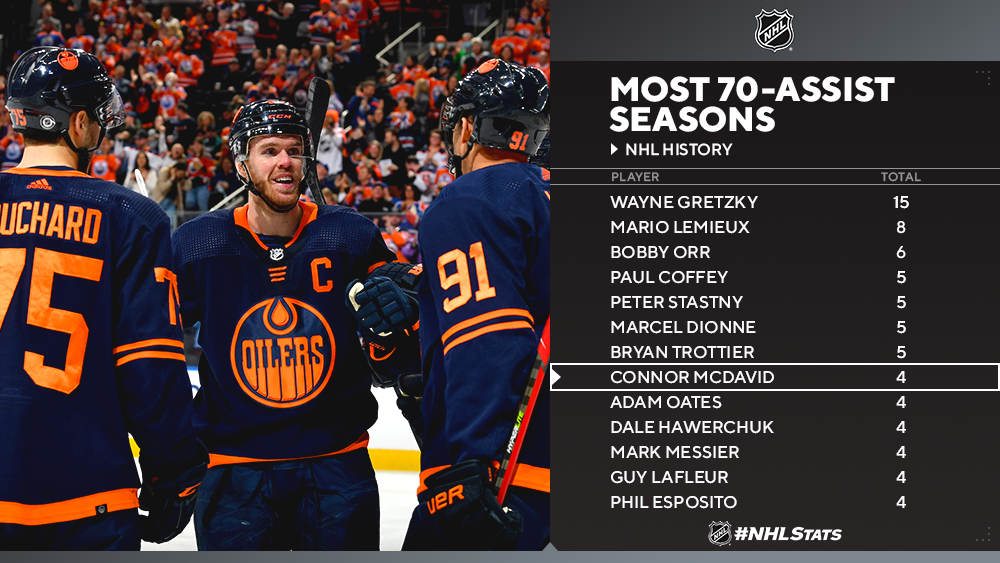 THEODORE SCORES IN OVERTIME, GOLDEN KNIGHTS MOVE CLOSER TO WILD CARD SPOT
Shea Theodore (1-1—2) scored the overtime winner in a crucial victory for the Golden Knights (42-31-5, 89 points) who moved within two points of the Stars (43-29-5, 91 points), who lost in regulation Wednesday, for the final Wild Card spot in the Western Conference.

* Theodore recorded his seventh career overtime goal and sixth in a Golden Knights uniform, tied with Max Pacioretty (6) and Jonathan Marchessault (6) for the most in franchise history.

BENIERS CONTINUES NOTABLE START TO NHL CAREER ON #NHLSTATS: LIVE UPDATES
Matty Beniers (0-1—1) collected a point in his fourth straight NHL game to begin his career (2-2—4) and helped the Kraken (26-44-6, 58 points) skate to a win against the League-leading Avalanche (55-16-6, 116 points). This note and more can be found in Wednesday’s edition of #NHLStats: Live Updates. 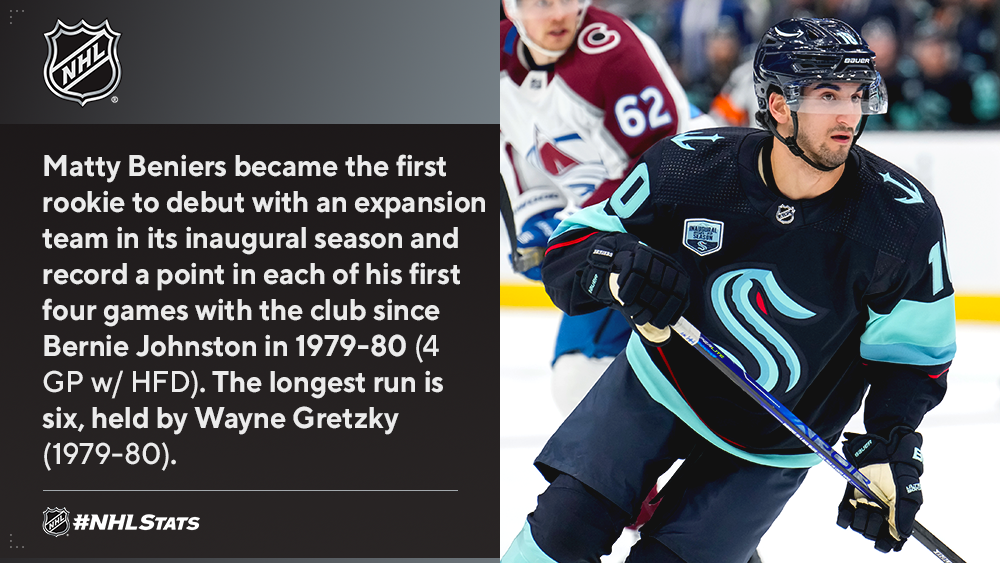 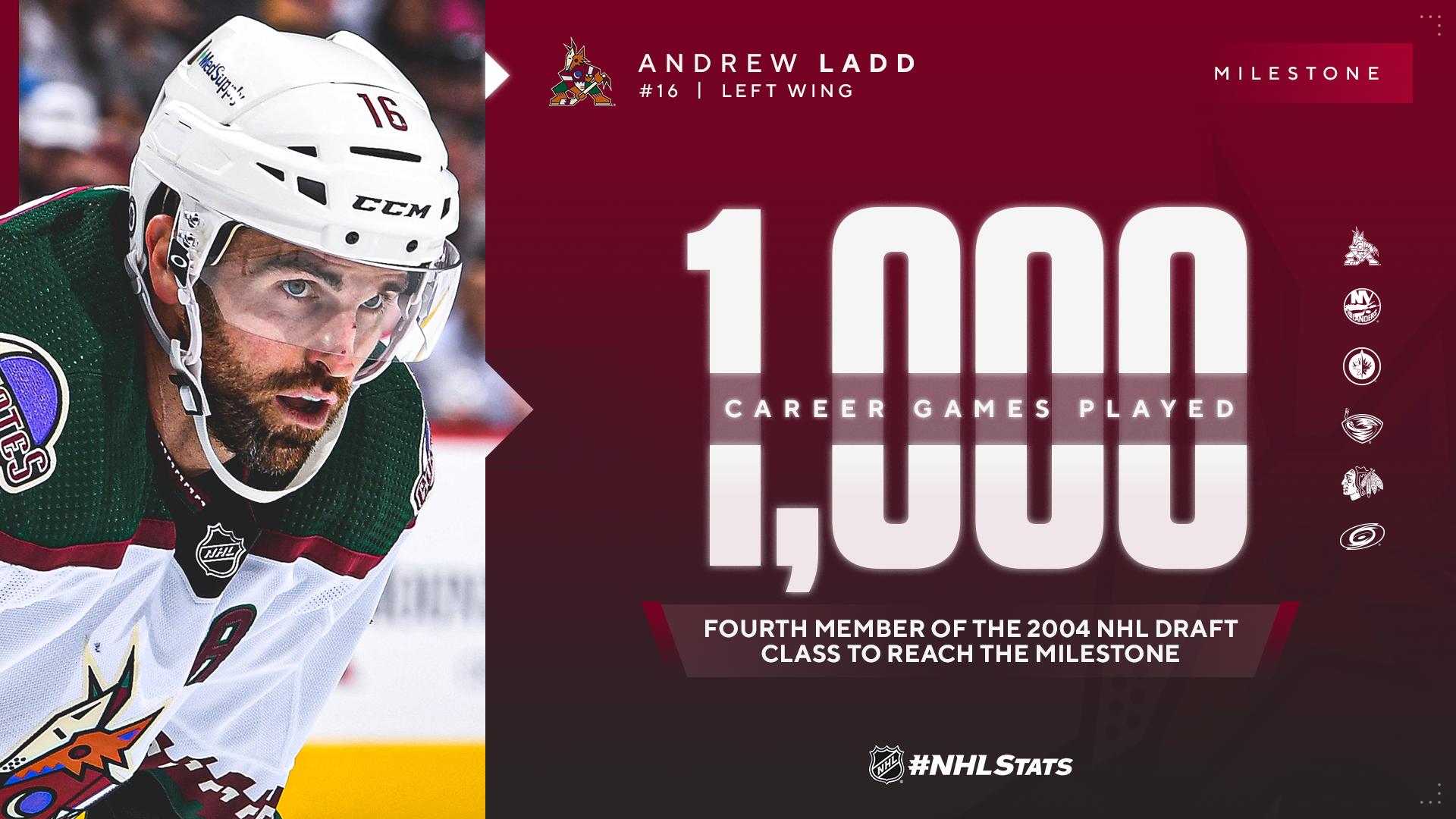 An Atlantic Division matchup broadcast nationally on ESPN between the second-place Maple Leafs (51-20-6, 108 points) and third-place Lightning (46-22-8, 100 points) will highlight an 11-game Thursday in what could be a First Round preview between the two clubs. Toronto and Tampa Bay have never met in the postseason. 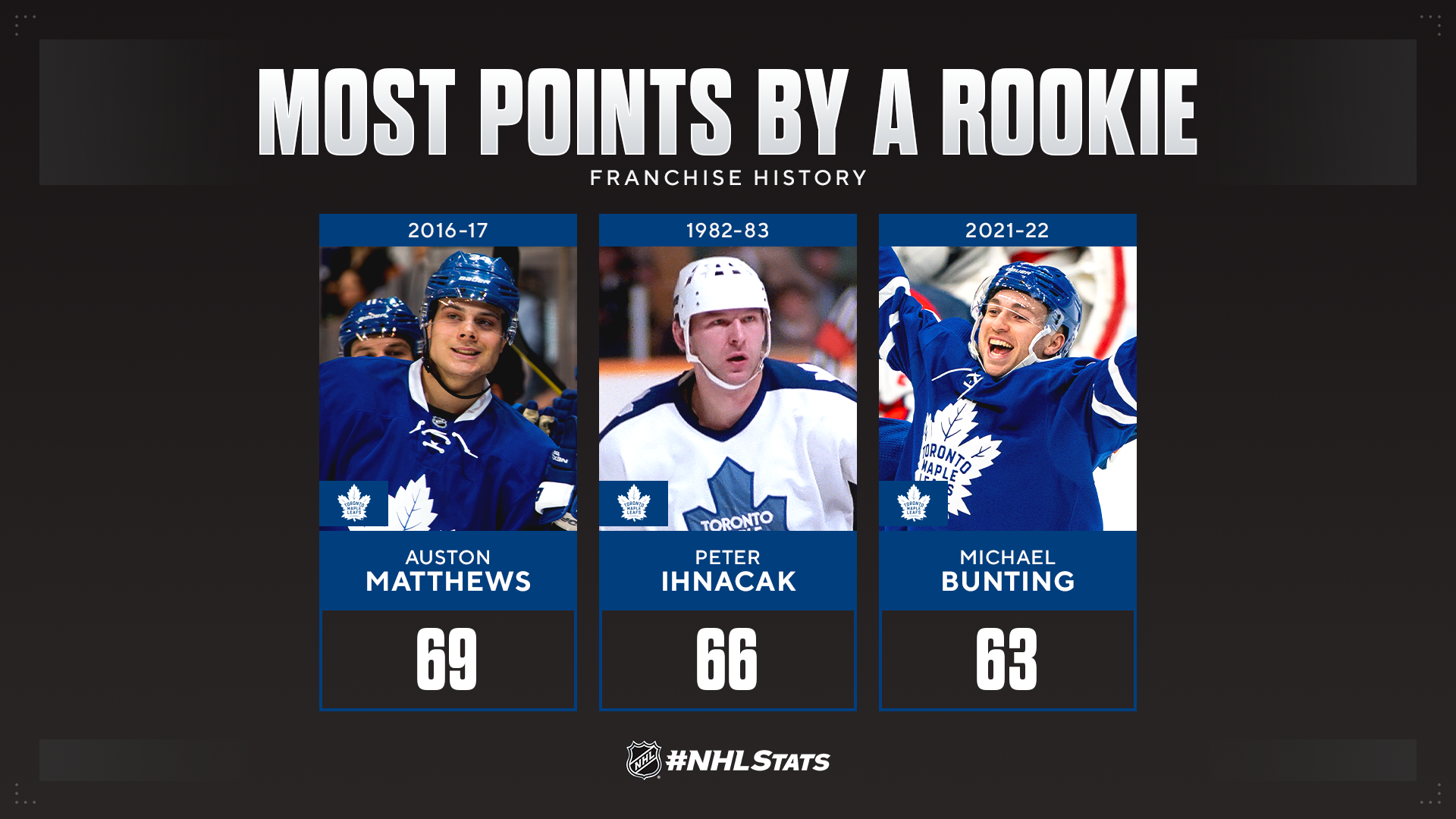