* For the first time in 28 years, the Maple Leafs have a 50-goal scorer as Auston Matthews reached the mark Thursday and reclaimed sole possession of top spot in the 2021-22 Maurice “Rocket” Richard Trophy race. Edmonton’s Leon Draisaitl can follow suit Friday as he enters the night with 49 goals.

* Brad Marchand hit the 30-goal mark for the fifth time in his career, during the highest-scoring regular-season period by the Bruins in more than 38 years.

Maple Leafs forward Auston Matthews (50-37—87 in 62 GP) scored his League-leading 50th goal of the season to become the fourth different player in franchise history to reach the mark and first since Dave Andreychuk in 1993-94 (53-46—99 in 83 GP). This is the first season in NHL history in which a Toronto player was the first to score 50 goals. 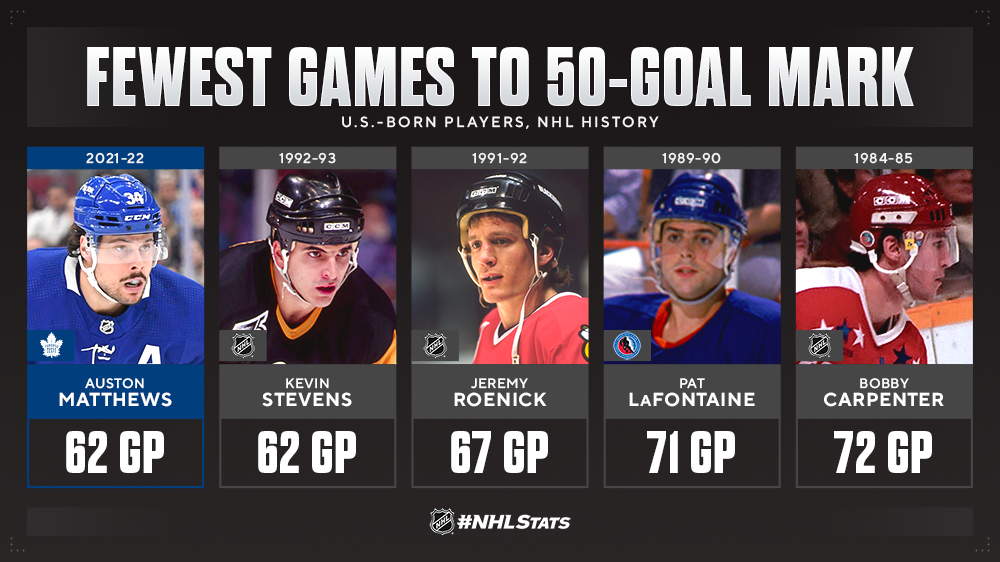 BRUINS ROUT DEVILS THANKS TO SIX-GOAL SECOND PERIOD
Twelve different skaters found the score sheet for Boston during a six-goal second period as the Bruins put eight past the Devils – the club’s highest-scoring performance on home ice in more than three years (8-2 W vs. DET on Oct. 13, 2018). The offensive outburst helped Boston (42-20-5, 89 points), which occupies the first Wild Card spot in the Eastern Conference, move within one point of idle Tampa Bay (42-18-6, 90 points) for third place in the Atlantic Division.

* Marc McLaughlin (North Billerica, Mass.), who captained Boston College for the past two seasons before signing with the Bruins on March 15, skated in his first NHL game and tallied the fifth marker of the second-period outburst. McLaughlin became the fifth Massachusetts-born player to score in his League debut with Boston, joining Ryan Donato (March 19, 2018), Frank Vatrano (Nov. 7, 2015), Shawn Bates (Oct. 2, 1997) and Hago Harrington (Dec. 29, 1925). 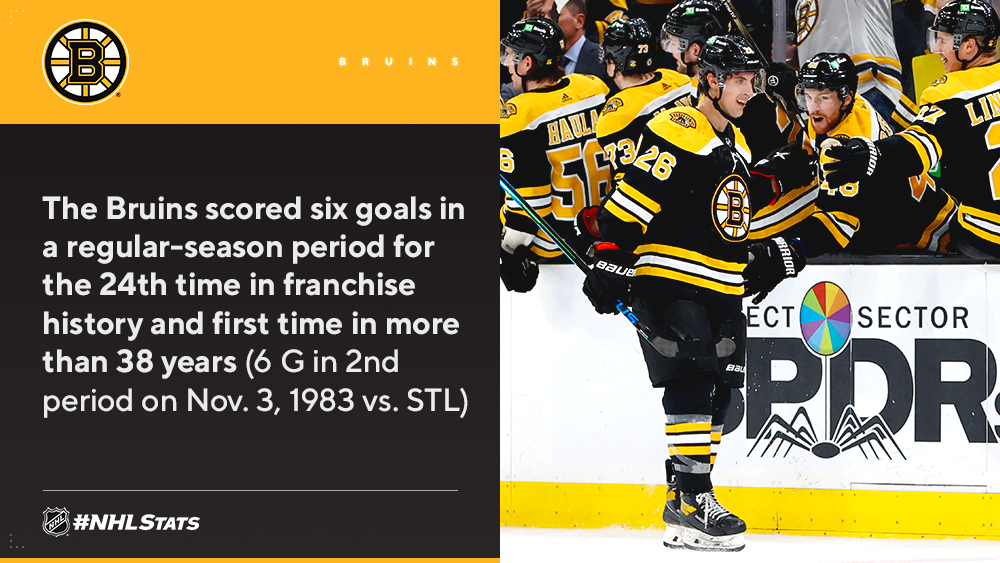 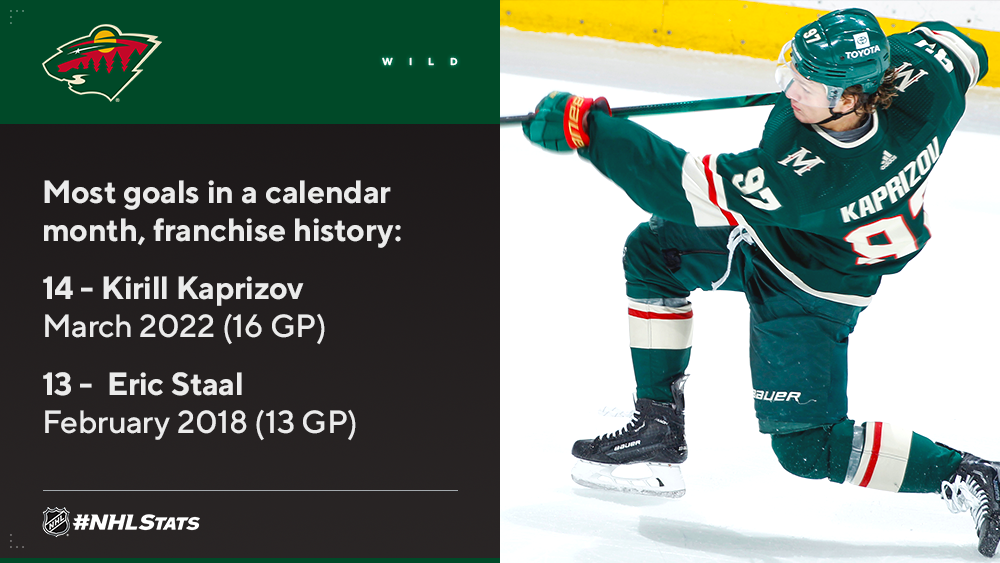 DIVISION LEADERS INCH CLOSER TO PLAYOFF BERTHS WITH SHUTOUT WINS
The top two teams in the Eastern Conference kept pace with each other with shutout victories on home ice Thursday as both the Panthers (46-15-6, 98 points) and Hurricanes (45-15-8, 98 points) moved within two points of their second 100-point season.

* Florida set a franchise record with its 28th home win of the season, with Sergei Bobrovsky posting a 37-save shutout and Jonathan Huberdeau notching his League-leading 71st assist of the season. Captain Aleksander Barkov scored his 30th and 31st goals of 2021-22, the second time he has hit the 30-goal mark, as he helped Florida open a seven-point lead atop the Atlantic Division as it pursues a third division title (2011-12 Southeast and 2015-16 Atlantic).

* Carolina also continued its success on home ice, collecting its 25th victory of the season at PNC Arena thanks to a game-winning goal by Sebastian Aho and a 32-save shutout by Frederik Andersen.  In his first season with the Hurricanes, Andersen improved to 33-10-3 with four shutouts (46 GP) to help the club open a five-point lead atop the Metropolitan Division as it chases down a sixth division title and second in as many campaigns after a first-place finish in the Discover Central in 2020-21.

AVALANCHE CREATE SPACE ATOP WEST, WHILE WILD CARD GETS ANOTHER SHUFFLE

The top team in the Western Conference created a 13-point advantage on the next closest club, while the second Wild Card position had an occupancy change for a third straight day:

* After defensemen combined for each of the first four goals of the game in regulation – including both a go-ahead and tying goal with less than five minutes remaining in the third period – it was Stars captain Jamie Benn who netted the overtime winner in Anaheim. The victory gave Dallas (38-25-3, 79 points) one point more than idle Vegas (37-28-4, 78 points) as the clubs continue to battle back-and-forth across the playoff line for a 20th straight day.

* If the playoffs started today, Colorado would host Dallas for the opener of their sixth all-time playoff series and second in three seasons after the Stars eliminated the Avalanche in a thrilling, high-scoring seven-game series in the 2020 Second Round en route to the Stanley Cup Final.

The NHL’s 2021-22 regular season enters the homestretch with 232 games remaining over the final four weeks of the campaign set to determine the bracket for the 2022 Stanley Cup Playoffs, which begin May 2. Friday’s slate will see Edmonton’s Leon Draisaitl put his five-game goal streak on the line as he aims to reach the 50-goal mark for the second time in his career when the Oilers (38-25-5, 81 points) face the Blues (37-20-9, 83 points) at Rogers Place.

* Andrew Copp has recorded a point in each of his last five games since being acquired by the Rangers ahead of the Trade Deadline (2-5—7) and will look to extend his run against the Islanders at Madison Square Garden. He can become the seventh player to post a point streak of six-plus games to start their tenure with the franchise and first since Marian Gaborik in 2009-10 (8 GP).