* The hockey world united in mourning the death of Mike Bossy at age 65. The legendary goal scorer led the Islanders to four straight Stanley Cup wins in the 1980s and the club earned a victory in his hometown of Montreal on Friday, where a moment of silence was held in his honor before puck drop.

* The busiest Saturday since the first weekend of the season gets going with a trio of games starting at 12:30 p.m. ET, along with a matinee on ABC and ESPN+ between two teams on a collision course for another First Round playoff meeting.

* Goaltenders were in the spotlight Friday as Carey Price made his season debut for Montreal while Sergei Bobrovsky of the Panthers and Ilya Sorokin of the Islanders set and matched franchise records, respectively.

Hockey Hall of Fame member Mike Bossy passed away Friday at the age of 65. A dynamic winger whose goal-scoring prowess during a remarkable 10-year career ranks, by almost any measure, as one of the greatest in NHL history, Bossy averaged 0.76 goals-per-game in his career – the highest in the League’s history. In addition to scoring 50 goals in an NHL-record nine consecutive seasons and topping the 60-goal mark five times (tied for the most in League history), Bossy notched 85 playoff goals and propelled the Islanders to four straight Stanley Cups. 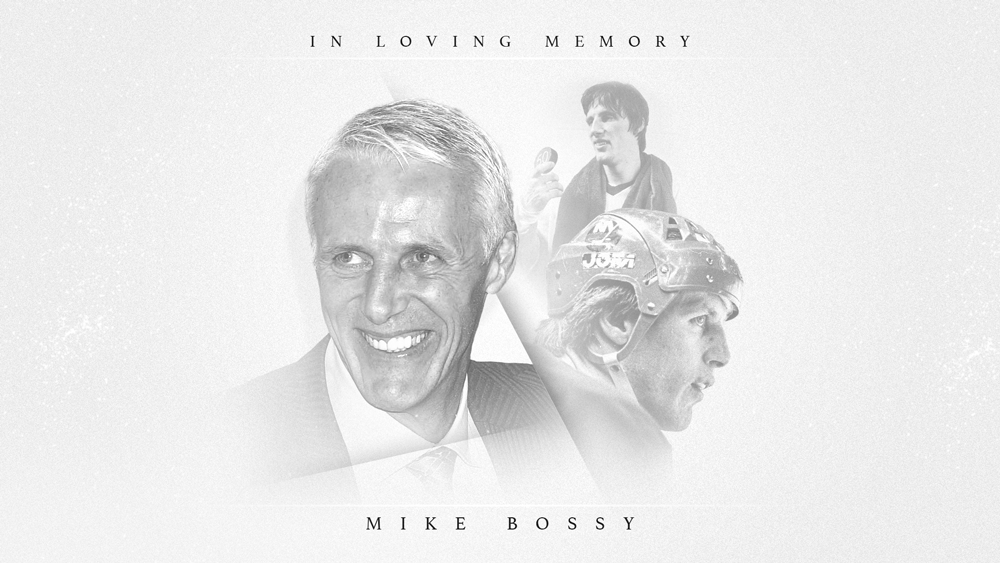 The busiest Saturday since the first weekend of the 2021-22 season will feature major playoff implications as 12 of 14 games involve at least one team that either holds a postseason position, sits within eight points of one, or are angling for a higher seed after already clinching.

MATINEE SLATE TO HAVE MAJOR IMPLICATIONS ON PLAYOFF PUSH

Five of the 14 games have a local start time of 2 p.m. ET or earlier, with eight of the 10 teams in the thick of the rush to the 2022 Stanley Cup Playoffs.

* The third and final showdown of the regular season between the Wild and Blues – teams on a crash course toward a third all-time playoff meeting (2015 R1 and 2017 R1) – will air nationally in the U.S. on ABC and ESPN+ at 3 p.m. ET. Tied at 98 points apiece, either Minnesota or St. Louis will reach the 100-point mark Saturday and gain the upper-hand in the Central Division standings.

* Leading Saturday’s slate at 12:30 p.m. ET, the Penguins and Bruins will meet for the first of two meetings over six days (also April 21). The Penguins, who are currently lined up for a First Round matchup against the higher-ranked Rangers, enter Saturday with 50 road points this season – tied for second among all teams in 2021-22 and tied for the third most in franchise history.

* The final matinee Saturday could shake up the Pacific Division standings ahead of the nighttime slate as the Golden Knights (41-29-5, 87 points) visit the Oilers (43-26-6, 92 points) with a chance to climb back into a playoff position. Both clubs have won seven of their past 10 games, with Edmonton posting a 7-2-1 record since March 26 to overtake Los Angeles for second place in the division and Vegas rolling at the same clip since March 22. Regardless of the outcome Saturday afternoon, the Kings (39-27-10, 88 points) will have their chance to influence the end-of-day standings when they host the Blue Jackets in Saturday’s nightcap. 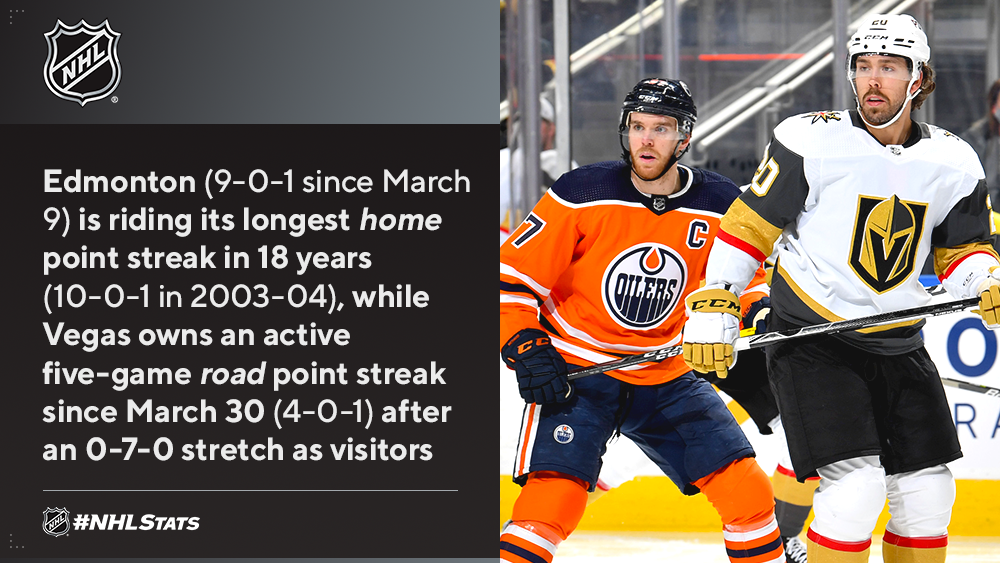 #STANLEYCUP PLAYOFFS RACE: METROPOLITAN DIVISION
Continuing the weekly spotlight on a postseason race, the #NHLStats team focuses on the Metropolitan Division, which features the closest race for a division title and a narrow gap between the No. 3 and No. 4 seeds.

* One week after pulling even with Carolina for the most points in the Metropolitan Division, New York will look to do so once again Saturday when they host Detroit. While the Hurricanes have held the No. 1 seed for 68% of the 2021-22 season (127 of 186 days) – including an active stretch of 57 consecutive days – the Rangers have maintained a gap of no more than four points since April 3 as they make a charge for their eighth division title. New York (2014-15) is the only team other than Washington (5x) or Pittsburgh (1x) to finish first in the Metropolitan Division since its creation in 2013-14.

* As the Rangers hunt down the Hurricanes for the No. 1 seed, two familiar playoff foes jockey for position behind them. The Penguins are looking to keep the Capitals at bay, with Washington narrowing Pittsburgh’s edge from a season-high eight points (tied) to as little as three points over the past 10 days thanks to wins in four of five games during that span (WSH: 4-1-0; PIT: 2-2-1).

* Washington, meanwhile, will try to finish among the top three in its division after trailing the third-place team by at least eight points for the first time since 2007-08 and sixth time in club history. During that campaign, the Capitals ranked last in the division through games played Dec. 7, 2007, before rallying to finish as the No. 1 seed in the Southeast – their first of four straight division titles and 10 over the course of the past 14 seasons.

* Florida pushed both its overall and home winning streaks to nine games while claiming its NHL-best 32nd home win of the season – tied for the most by any team since 1995-96. In the process, the Panthers created a 10-point cushion over the idle Maple Leafs (48-20-6, 102 points) atop the Atlantic Division and inched closer to securing home ice in the First Round of the 2022 Stanley Cup Playoffs. 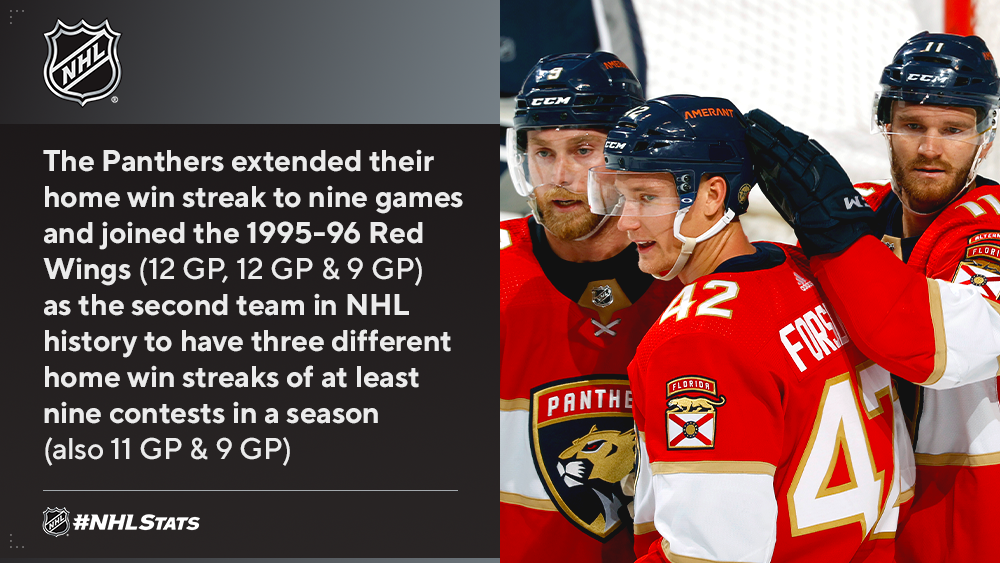 Two Black on-ice officials worked a game together for the first time in NHL history Thursday, when referee Jordan Samuels-Thomas made his NHL debut alongside linesman Shandor Alphonso during the Blackhawks-Sharks game at United Center in Chicago.

* It was the first time a Black on-ice official wore the orange-and-black referee arm bands since April 2, 2004 when Jay Sharrers worked the Islanders-Hurricanes game. Sharrers, who became the NHL’s first Black on-ice official Oct. 6, 1990, was also at United Center on Thursday, working as the officiating manager.

* Samuels-Thomas, who was picked by the Atlanta Thrashers in the 2009 NHL Draft, wore No. 42 in honor of Jackie Robinson, who broke Major League Baseball’s color barrier April 15, 1947.