* Two more tickets to the 2022 Stanley Cup Playoffs were secured as the Predators and Kings became the 14th and 15th teams to clinch a berth. Now just one spot remains open with three days of regular-season play left in the 2021-22 campaign.

* The Hurricanes clinched the Metropolitan Division, securing top spot in their division for the second straight season and established franchise records in the process.

* Another First Round matchup has been locked in as the Oilers and Kings are set to meet in the playoffs for the eighth time and first in 30 years.

* Connor McDavid increased his lead in the Art Ross Trophy race with his third four-point performance of the campaign and recorded the highest single-season total by an Oilers skater in 31 years.

* Auston Matthews became the first U.S.-born skater in NHL history to score 60 goals in a single campaign and helped the Maple Leafs secure home-ice advantage in the First Round of the 2022 Stanley Cup Playoffs.

* Click here to read more on Nashville and Los Angeles in #NHLStats Pack: Team Clinching Notes, a running document of notes for all teams as they clinch a berth in the 2022 Stanley Cup Playoffs.

* On the night captain Roman Josi (1-1—2) collected his 400th career assist, the Predators secured a point and clinched a berth into the Stanley Cup Playoffs for the eighth straight season and 15th time in franchise history.

* The Predators’ streak of eight consecutive postseason appearances is tied with the Capitals for the second longest active stretch in the NHL, behind only the Penguins (16, including 2022). Nashville has reached the postseason in 15 of its 23 campaigns since entering the NHL in 1998-99 (65%), reaching the Final once (2017).

* The idle Kings became the 15th team – and seventh Western Conference club – to clinch a berth in the 2022 Stanley Cup Playoffs and solidified a First Round matchup against the Oilers. Los Angeles will be making its first postseason appearance since 2018 and 31st in franchise history. Six players remain with the club from their last playoff appearance: Dustin Brown, Drew Doughty, Alex Iafallo, Adrian Kempe, Anze Kopitar and Jonathan Quick.

* After an Edmonton victory secured the No. 2 seed in the Pacific Division, Los Angeles enters the 2022 Stanley Cup Playoffs with the No. 3 seed – securing the second First Round matchup of the postseason. The two teams will meet in the playoffs for the eighth time ever and first time in 30 years, with the Oilers owning a 5-2 series edge after eliminating the Wayne Gretzky-led Kings in their last meeting.

Pyotr Kochetkov (31 saves) joined Justin Peters (3-0-0 in 2009-10) as the second goaltender in franchise history to start their career with three straight wins as the Hurricanes (53-20-8, 114 points) clinched the Metropolitan Division and captured their second straight division title. Carolina still awaits its First Round opponent, with Boston (50-25-5, 105 points) currently sitting in the first Wild Card spot with two games remaining in 2021-22. 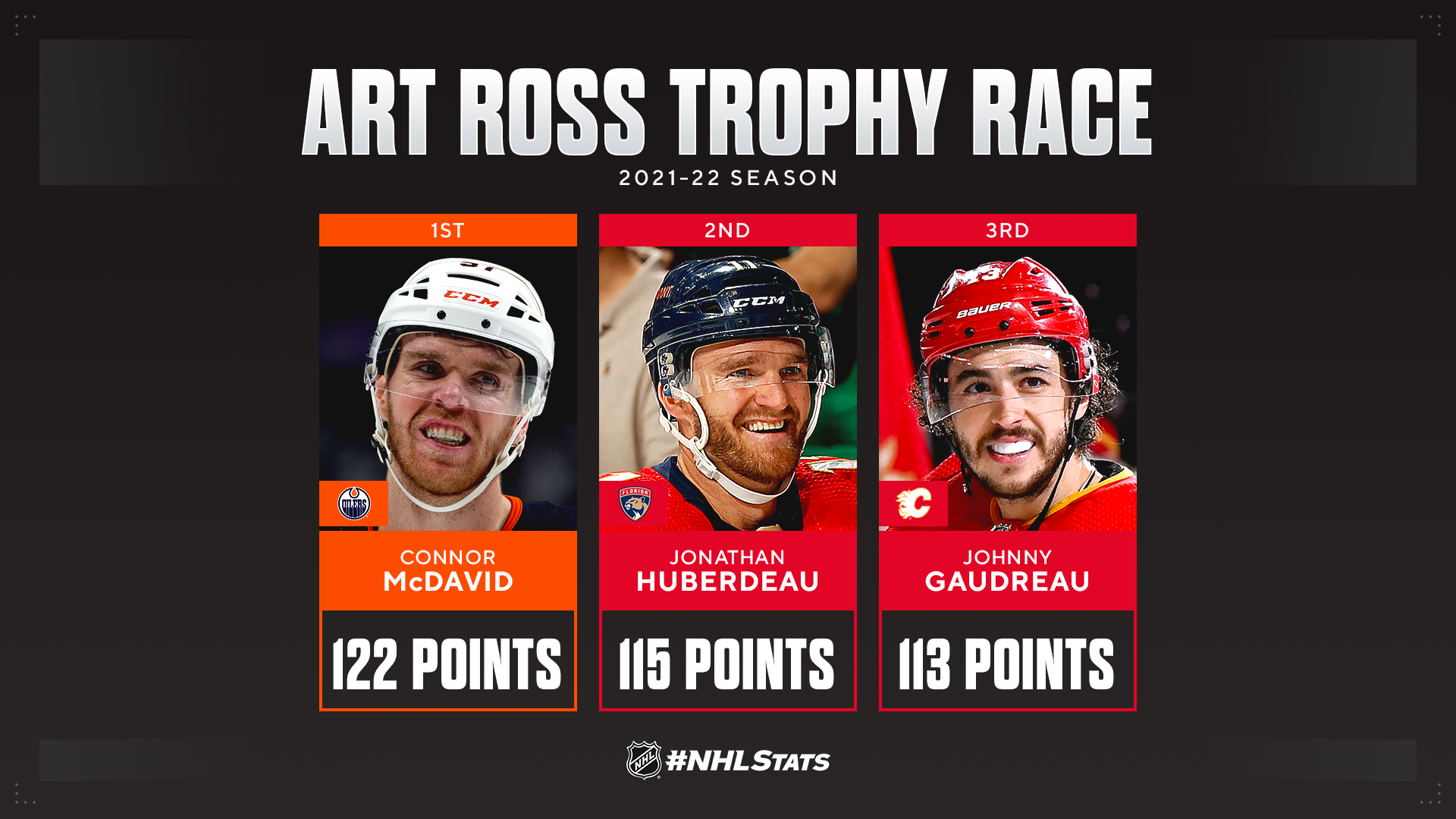 MATTHEWS HITS 60 GOALS AS MAPLE LEAFS CLINCH NO. 2 SEED IN ATLANTIC DIVISION
With the chants of MVP echoing throughout Scotiabank Arena, Auston Matthews (2-0—2) became the NHL’s first 60-goal scorer in a decade and helped the Maple Leafs (53-21-7, 113 points) clinch second place in the Atlantic Division, securing home-ice advantage in the First Round of the 2022 Stanley Cup Playoffs. 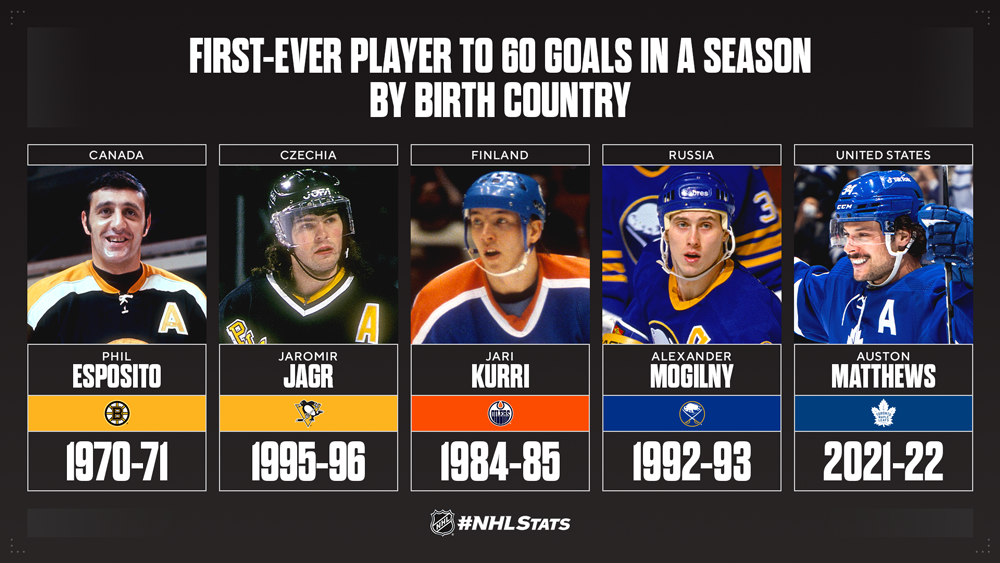 * Matthews, who tied the Maple Leafs record for most multi-goal games in a season, also became the ninth different player in the past 30 years to record 60 or more goals and 100 or more points in a single campaign– the only active player to do so is Ovechkin in 2007-08 (65-47—112). 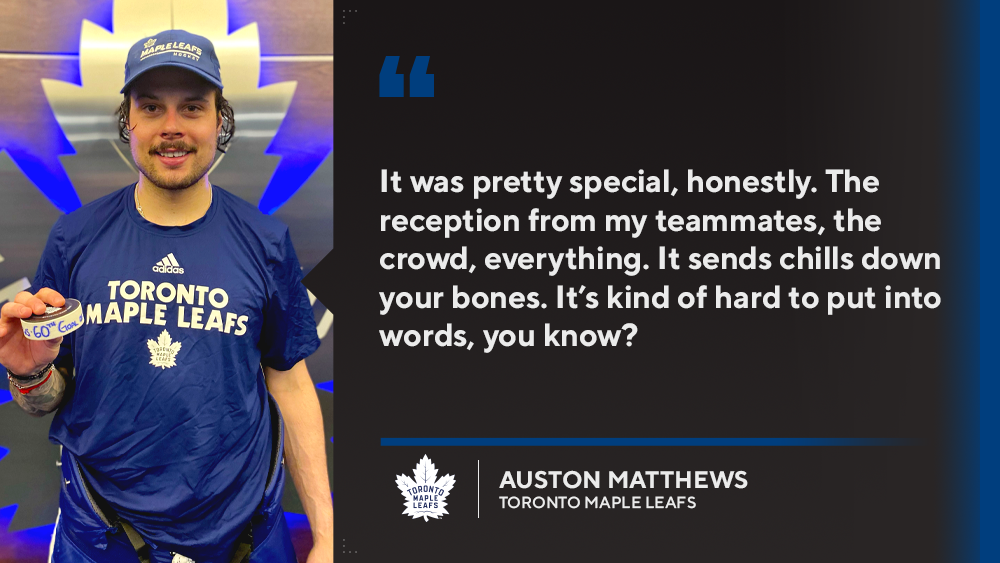 STAMKOS CONTINUES STRING OF SUCCESS EN ROUTE TO FIRST 100-POINT SEASON
Steven Stamkos (2-2—4) registered his fifth consecutive outing with three-plus points to reach the 100-point mark in a single season for the first time in his career and helped the Lightning (50-22-8,108 points) inch closer to securing the No. 3 seed in the Atlantic Division. 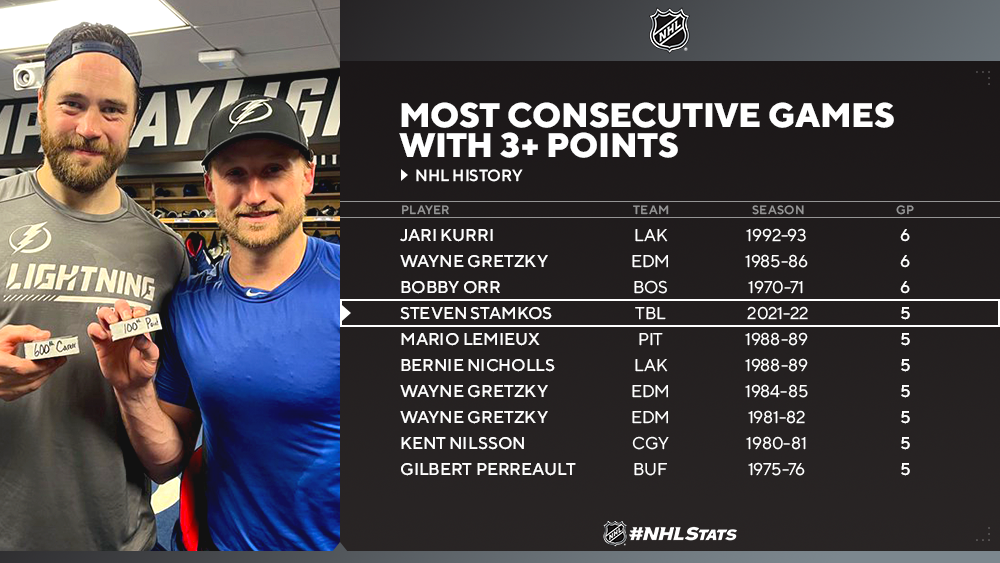 The Tuesday edition of #NHLStats: Live Updates features a number of notes from the 13-game slate, including Erik Haula and Taylor Hall scoring six seconds apart to match the second-fastest two goals in franchise history. The duo helped the Bruins keep pace with the Lightning for third place in the Atlantic Division and prevented the Panthers from securing the franchise’s first Presidents’ Trophy.

* Gabriel Landeskog could return in Game 1 for Avalanche

With 15 of 16 postseason berths accounted for, all eyes will be on the Stars (45-30-5, 95 points) who have a chance to clinch the final Wild Card spot in the Western Conference when they welcome the Coyotes (23-50-7, 53 points) to American Airlines Center on a five-game Wednesday. 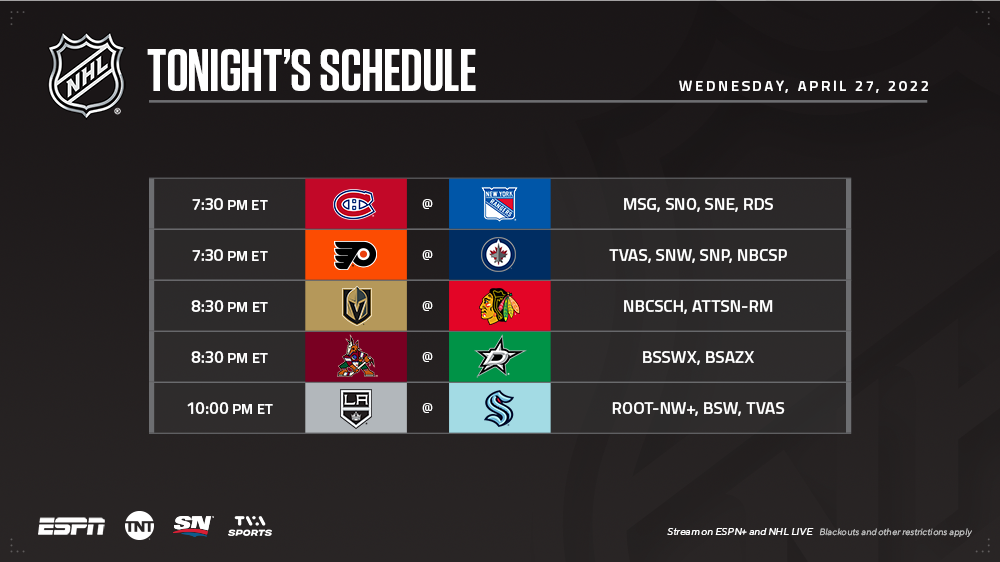