* The Wild and Capitals each clinched Stanley Cup Playoffs berths Sunday, with the former defeating the Sharks in a back-and-forth contest to secure their third consecutive postseason appearance.

* Carolina will aim to maintain the No. 1 seed in the Metropolitan Division – a position they have held every day since Feb. 18 and for 69% of the season – when they visit Arizona. The Rangers would move into first place with a regulation loss by the Hurricanes.

WILD CLINCH THIRD STRAIGHT PLAYOFF BERTH IN BACK-AND-FORTH CONTEST
In an exciting back-and-forth game at Xcel Energy Center, in which each club overcame a deficit, it was a tying goal in the third period by Kevin Fiala (1-3—4) that allowed Minnesota to clinch a playoff berth – with captain Jared Spurgeon (2-0—2) then notching the overtime winner for good measure. The Wild punched their ticket to the postseason for a third consecutive year, the ninth time in the past 10 campaigns and 12th time in franchise history. Click here to check out more clinching notes for Minnesota.

* Spurgeon and Jonas Brodin each have played in 55 career playoff games, all with the Wild – trailing only longtime captain Mikko Koivu (59 GP) on the franchise list. Spurgeon, in his second season as captain, and Brodin are set to tie Koivu for the most years in the postseason for Minnesota (9). Only Marc-Andre Fleury (162 GP) – who claimed the victory Sunday – and Mats Zuccarello (84 GP) have more games of playoff experience on the Wild roster. 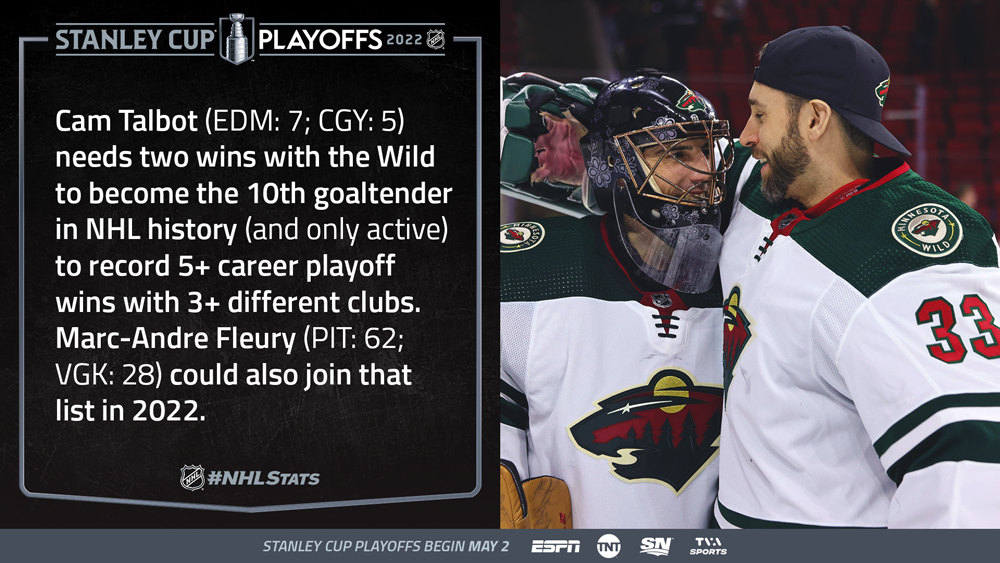 CAPITALS HEADED TO PLAYOFFS FOR EIGHTH CONSECUTIVE SEASON
The idle Capitals are headed to the playoffs for the eighth consecutive season and 32nd time in franchise history by virtue of a Maple Leafs regulation win against the Islanders. Washington’s run of eight consecutive playoff appearances – which includes a Stanley Cup win in 2018 – is the second longest in franchise history behind a stretch of 14 straight from 1983 to 1996. Click here to check out more clinching notes for the Capitals.

PANTHERS SCORE SIX ONCE AGAIN, INCH CLOSER TO TOP SPOT IN NHL
The Panthers put up six goals again Sunday – despite leading scorer Jonathan Huberdeau having his point streak end at 13 games – as rookie Anton Lundell carried the offense with his fourth career multi-goal outing (including Florida’s 12th shorthanded goal of 2021-22). Lundell overtook Huberdeau and Kristian Huselius for the second-most multi-goal games in a season by a Panthers rookie.

* Lundell posted his 12th multi-point game of the season, third among rookies in 2021-22 and tied with Jesse Belanger (1993-94) for the most in one campaign by a rookie for Florida. Lundell overtook Belanger on the Panthers’ list for goals by a rookie (moving into fourth place) and climbed within seven points of equaling his single-season franchise rookie record of 50.

* The Panthers are averaging 5.3 goals-per-game over their 10-game winning streak – they are just the second team in the past 35 years to score at that rate over a stretch of 10 consecutive wins (also PIT in 1992-93).

* Anthony Duclair and Sam Reinhart got things going for Florida by scoring goals 90 seconds apart in the middle frame, which Lundell and Maxim Mamin bested later in the period with tallies separated by only 28 seconds. A quick-strike offense has been a staple of Florida’s output this season as they have scored multiple goals in a span of 90 seconds or less on 28 occasions – the most in the NHL (ahead of PIT, TOR & CGY: 25x each).

SEVEN-GOAL SECOND PERIOD PROPELS BLUES TO NINTH STRAIGHT WIN
The Blues erupted for seven goals in the middle frame to establish a franchise record for most in a single period en route to an eight-goal victory over the Predators – their highest total on the road in more than a decade. St. Louis (46-20-10, 102 points) earned its ninth straight win and extended its point streak to 12 games dating to March 28 (11-0-1), one shy of the longest in franchise history (12-0-1 in 2014-15).

* The Blues became the first team in more than eight years to score seven goals in a period on the road, following the Islanders who did so in the third period against the Canucks on March 10, 2014. 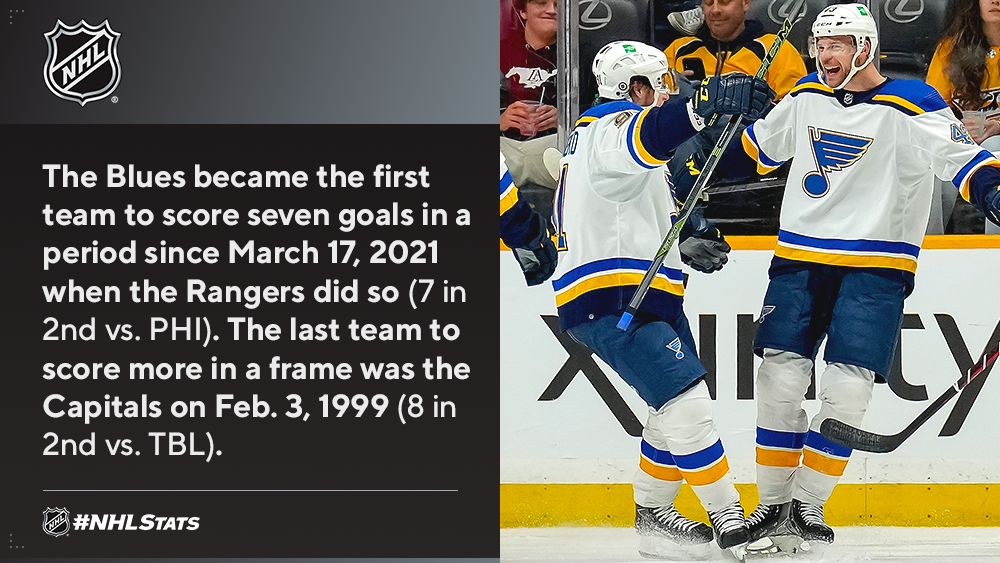 * The Blues scored at least four goals for the 12th straight game – the longest such streak since the 1992-93 Penguins (15 GP). It marked the 13th time in NHL history that a team has scored as many goals in a dozen or more consecutive contests.

* NHL Buzz: Tristan Jarry out week to week for Penguins with lower-body injury

After putting nine on the board Saturday, the playoff-bound Flames will head to Chicago to open a doubleheader on Sportsnet, with the finale set to have a major impact on the Western Conference bracket. 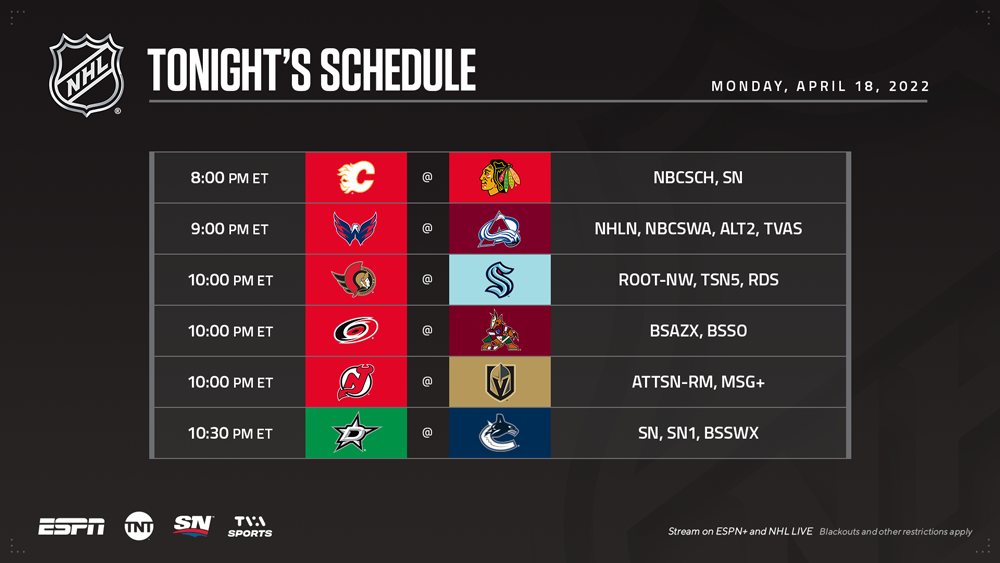 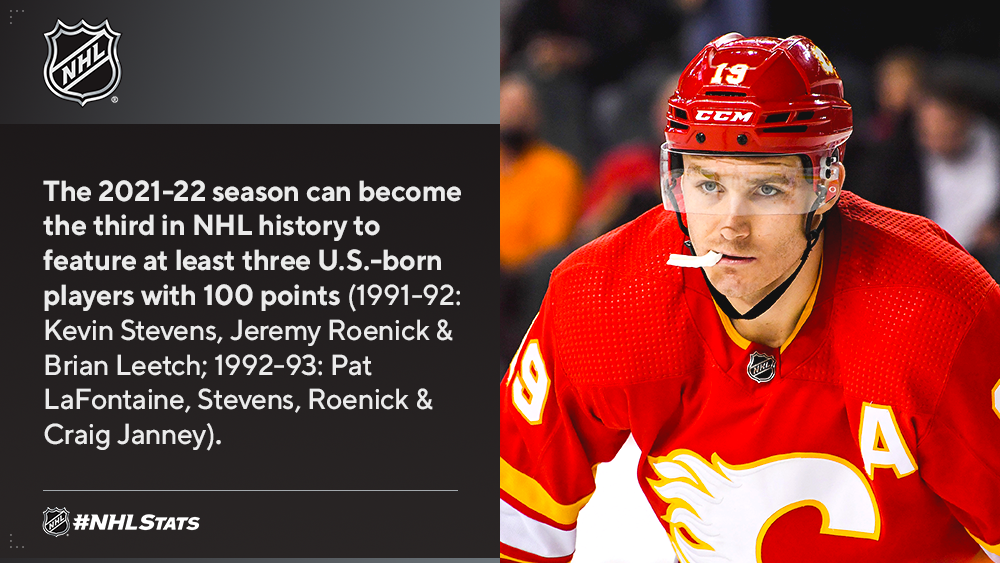 QUESTS FOR WILD CARD SPOTS CONTINUE IN THE WEST

A Western Conference Wild Card shuffle could be in the cards Monday, with the Stars (43-27-5, 91 points) visiting the Canucks (37-28-10, 84 points) and the Golden Knights (41-30-5, 87 points) also in action. Dallas holds the first Wild Card position, with four- and seven-point advantages over Vegas and Vancouver, respectively.