* The Oilers will look to become the first Western Conference team to advance to the Conference Finals when they visit Calgary on Thursday.

Game 5 between the Blues and Avalanche was a rollercoaster for the ages with Colorado jumping out to a 3-0 lead, St. Louis coming all the way back to tie the game 3-3 with 4:46 remaining in the third period, Nathan MacKinnon scoring an end-to-end highlight-reel hat trick goal exactly two minutes later, followed by Robert Thomas scoring the latest tying tally when facing elimination in Blues history (59:04) to set the stage for Tyler Bozak’s overtime winner. Game 6 is set for Friday in St. Louis (8 p.m. ET on TNT, SN, TVAS, CBC).

* The Blues are the first team to score two game-tying goals in the final five minutes of regulation when facing elimination. The only other team to do so in any playoff game: Buffalo in Game 1 of the 2006 Conference Semifinals at Ottawa.

* St. Louis rallied from a three-goal deficit to win a postseason contest for the fifth time in franchise history and first since Game 3 of the 1998 Conference Quarterfinals (4-3 W at LAK). 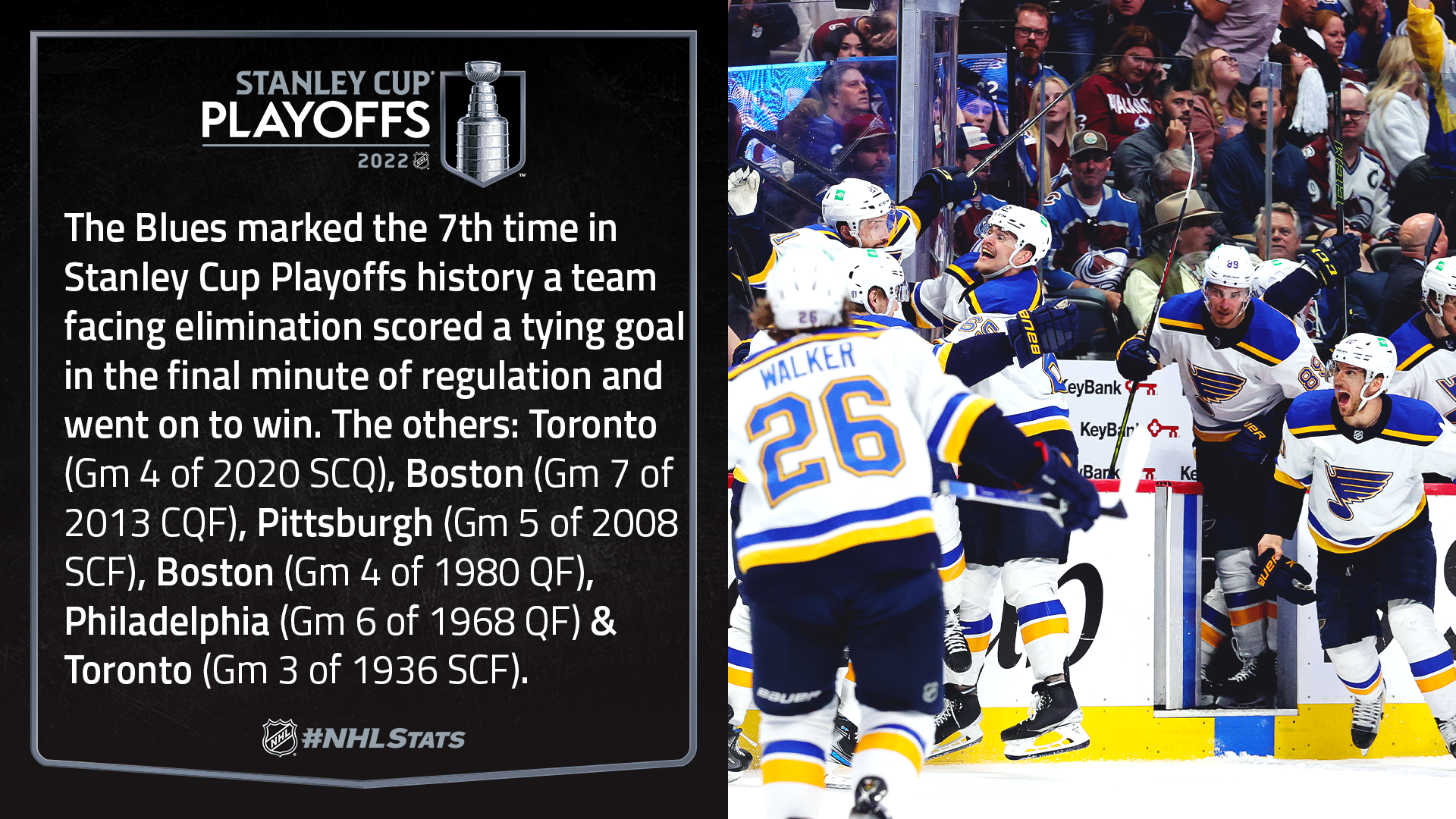 MacKINNON’S GAME 5 PERFORMANCE LEAVES MARK ON ALL-TIME LISTS
With a hat trick and a four-point night, Nathan MacKinnon (3-1—4) surpassed 80 career postseason points and climbed a number of Avalanche/Nordiques all-time playoff lists in the process. Despite the loss, he became the first player in franchise history to score a hat trick in a potential series-clinching game. 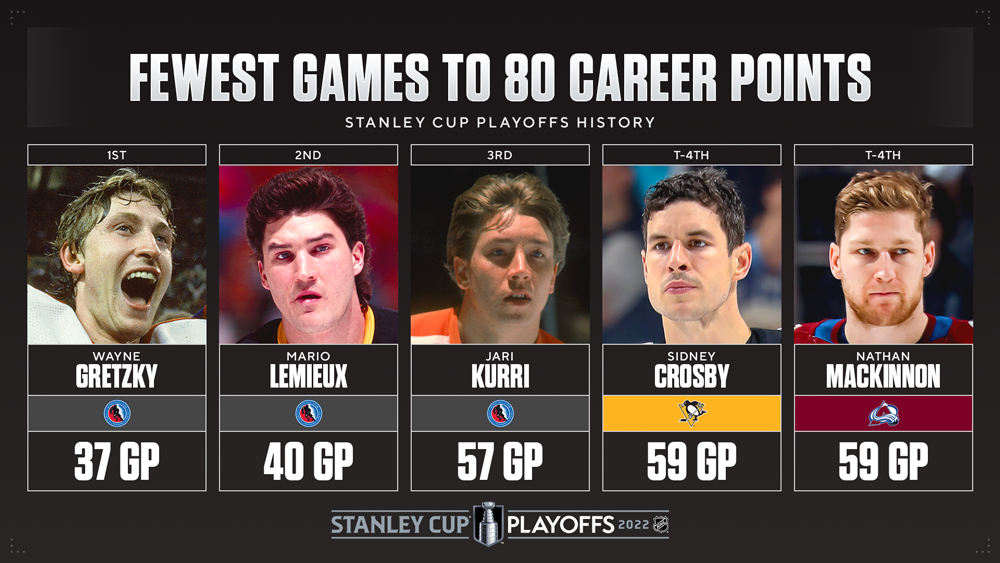 * MacKinnon also posted his fourth career four-point playoff game and surpassed Forsberg (3) for the most in Avalanche/Nordiques history. He also secured his second-career playoff hat trick, which tied Peter Stastny, Goulet and Sakic for the most in franchise history. 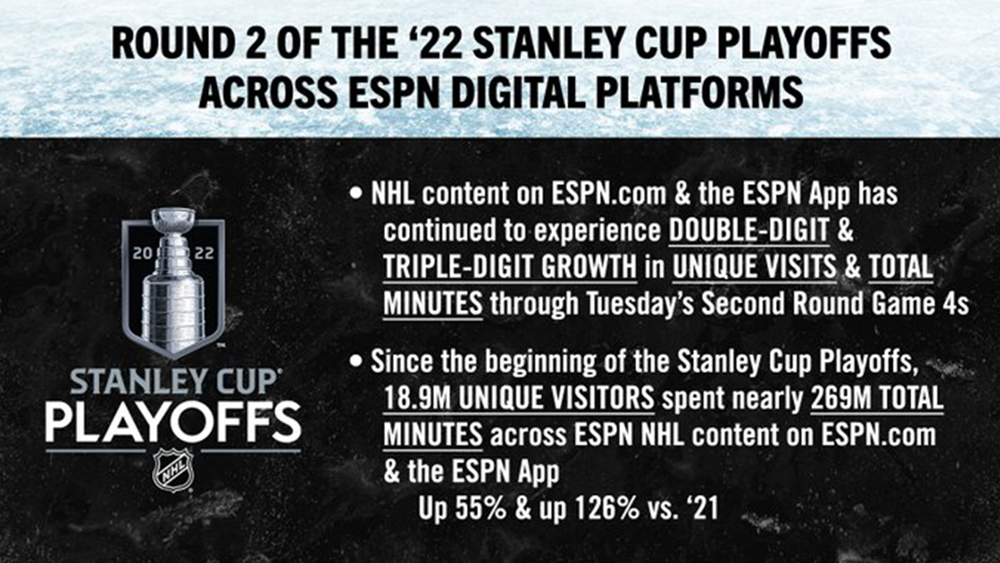 A two-game Thursday in the 2022 Stanley Cup Playoffs features a battle between the Hurricanes and Rangers at PNC Arena for a series lead, while the Oilers look to advance to the Conference Finals for the first time in 16 years.

* Carolina has won each of its past six playoff contests at PNC Arena – the last NHL team to post a longer home win streak in a postseason was Chicago, which posted a seven-game run in 2014. Teuvo Teravainen has found the score sheet in each of those six contests (2-7—9) and can establish a Hurricanes/Whalers record for longest playoff-opening home point streak.

* The Rangers, who extended their home winning streak to five games Tuesday, will look to win their first road contest against the Hurricanes and pull ahead in the series. Should New York do so, it would move within one of clinching a series after facing a 2-0 deficit for the third time in its 95-year history – the only two instances: 2013 Conference Quarterfinals (vs. WSH) and 1996 Conference Quarterfinals (vs. MTL). 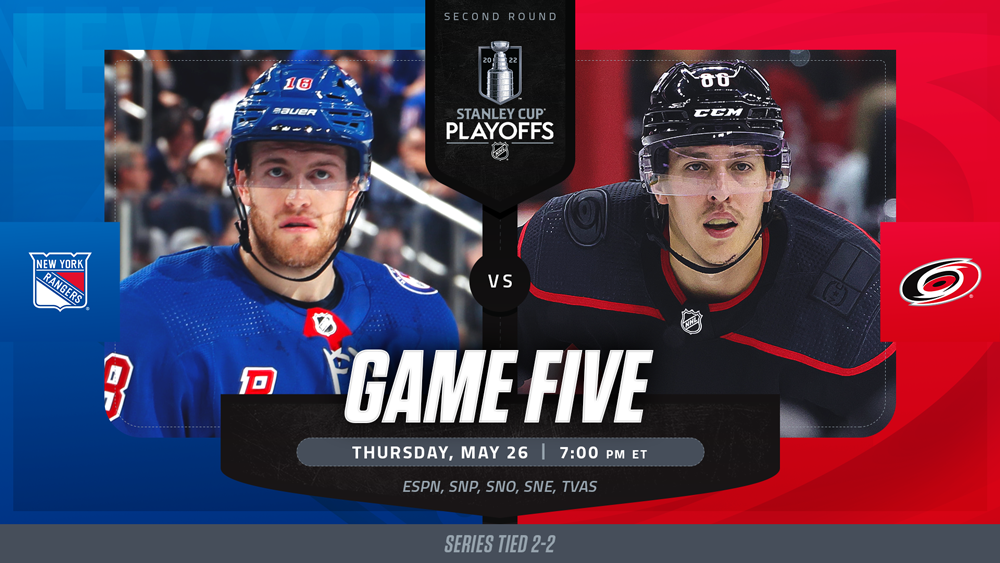 * Leon Draisaitl, who became the first player in Stanley Cup Playoffs history to post three points in four consecutive games, enters Thursday with 2-11—13 through four games in Edmonton’s 2022 Second Round series versus Calgary. Only three different players in NHL history have recorded more assists in a single series: Wayne Gretzky (2x: 14 in 1985 CF & 13 in 1987 DSF), Rick Middleton (14 in 1983 DF) and Doug Gilmour (13 in 1994 CSF).

* The Flames will attempt to pull within one of tying their series, with the opportunity to overcome a 3-1 deficit for the first time in franchise history. Should Calgary do so, it would become the second team this postseason to accomplish the feat (also NYR vs. PIT in R1) – the last time multiple teams overcame a 3-1 deficit in the same playoff year was 2014 (NYR: 4-3 W vs. PIT in R2 & LAK: 4-3 W vs. SJS in R1). 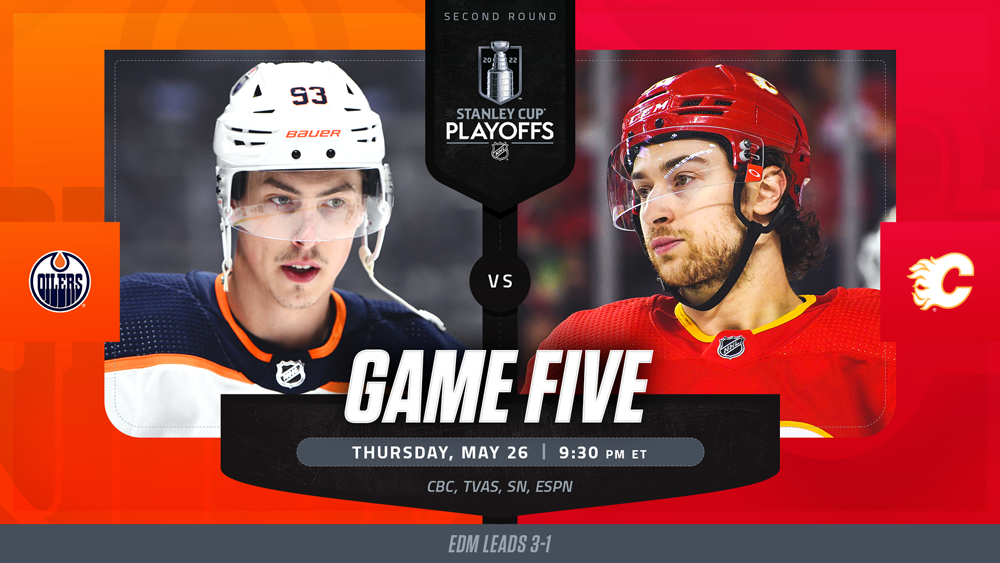