* The stars were on display Tuesday as Auston Matthews and Vladimir Tarasenko eachled their clubs to comeback victories.

* Adrian Kempe, who netted the game winner in overtime, matched three-point performances by Connor McDavid and Leon Draisaitl to help the Kings head home with a chance to advance to the Second Round.

* Sebastian Aho climbed a pair of franchise lists as the Hurricanes captured Game 5 and continued the series trend with the home team winning yet again.

* Strong viewership numbers continue through the first week of the opening round as the 2022 Stanley Cup Playoffs are averaging 668,000 viewers across ESPN, ESPN2, TNT and TBS, up 42% from 2021 and up 29% from 2019 on cable through the same number of games.

MATTHEWS COMPLETES BACK-AND-FORTH AFFAIR WITH GAME WINNER
After William Nylander (1-2—3) helped Toronto erase a 2-0 deficit to take a 3-2 lead and Ryan McDonagh (1-0—1) scored a game-tying goal in the third period for Tampa Bay, Auston Matthews found the back of the net 5:37 later to give the Maple Leafs the lead for good and a 3-2 series advantage against the defending Stanley Cup champions.

* Toronto, which recorded a multi-goal comeback win in the playoffs for just the third time since 2004 (also Game 4 of 2020 SCQ & Game 3 of 2017 R1), did so against the defending Stanley Cup champions for just the second time in franchise history after first accomplishing the feat against the Canadiens in Game 4 of the 1945 Semifinals.

ANOTHER HAT TRICK HIGHLIGHTS BLUES GAME 5 VICTORY
With the game tied 2-2 entering the third period, Vladimir Tarasenko scoredthree straight goals, including twice in the opening 2:31 of the final frame, to register the third hat trick of this First Round series (also David Perron: Game 1 & Kirill Kaprizov: Game 2) and help the Blues push the Wild to the brink of elimination.

* Tarasenko, who became the third player in franchise history – and first in 27 years – to score three goals in a playoff period, is the fourth player in Blues history to register a natural hat trick in the playoffs joining Red Berenson (Game 1 of 1969 SF), Brendan Shanahan (Game 4 of 1995 CQF) and Jaden Schwartz (Game 6 of 2019 R1).

KEMPE, KINGS TAKE 3-2 SERIES LEAD WITH QUICK OT GOAL
Despite three-point performances by Leon Draisaitl (2-1—3) and Connor McDavid (1-2—3), the Kings extinguished a late Oilers comeback attempt in the third period after Adrian Kempe (2-1—3) scored his second goal of the game 1:12 into overtime to help Los Angeles push Edmonton to the edge of elimination.

* Kempe, who led Los Angeles in goals during the regular season, became the sixth player in Kings history to score both his first career playoff goal and an overtime winner in the same game – the last skater to do so with the club was Anze Kopitar in Game 2 of the 2010 Conference Quarterfinals.

JARVIS, AHO IGNITE OFFENSE, HURRICANES RETAKE SERIES LEAD
Seth Jarvis (2-0—2) and Sebastian Aho (0-2—2) were two of five Hurricanes players to record a multi-point outing, with Aho moving up a number of franchise all-time lists in the process, as Carolina won Game 5 after being tied 2-2 in a best-of-seven series for the sixth time in franchise history. The Hurricanes went on to win each of the previous five instances: the 2021 First Round (vs. NSH), 2006 Conference Finals (vs. BUF), 2006 Conference Quarterfinals (vs. MTL), 2002 Conference Semifinals (vs. MTL) and 2002 Conference Quarterfinals (vs. NJD).

* Turner Sports’ inaugural Stanley Cup Playoffs coverage is up 46% compared to similar cable-televised windows in 2021, and up 48% from 2019. Female viewership for playoff games airing on TNT and TBS is up 71% when compared to televised games to date last year, and up 73% from 2019.

* ESPN and ESPN2 also continue to report strong viewership through the first week of the 2022 First Round.

CANADIENS RETAIN NO. 1 PICK, DEVILS CLIMB TO NO. 2 VIA 2022 NHL DRAFT LOTTERY
The Canadiens retained the first overall selection at the 2022 Upper Deck NHL Draft as a result of the 2022 NHL Draft Lottery and are set to host the event at Bell Centre (July 7-8). The Devils landed the No. 2 selection, moving up from fifth overall. 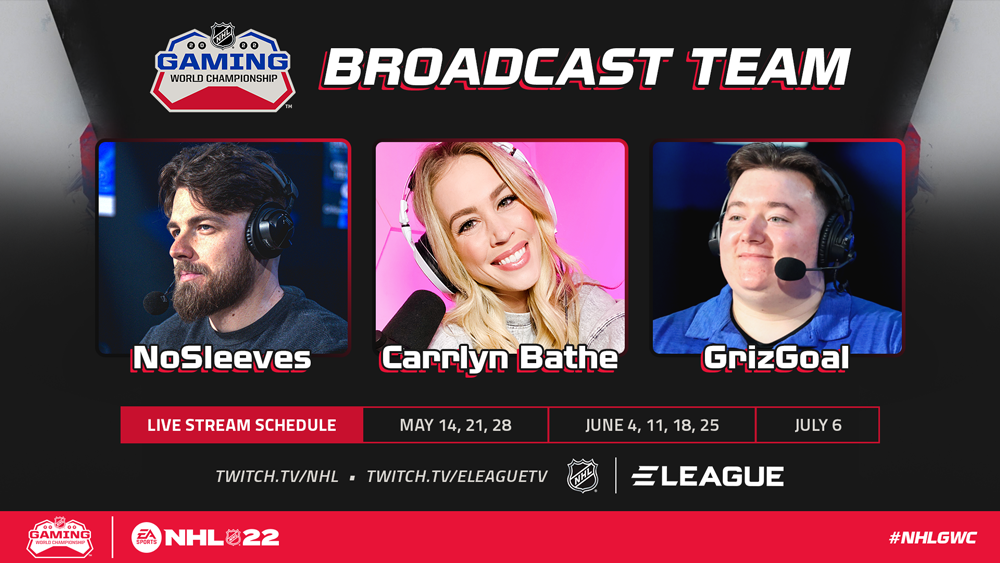 THREE-GAME WEDNESDAY FEATURES PITTSBURGH ONE WIN SHY OF SECOND ROUND
With three games slated for Wednesday, it’s the Penguins who have the opportunity to become the second team to advance to the Second Round of the 2022 Stanley Cup Playoffs. Pittsburgh, which scored seven goals in Game 3 and Game 4, can become just the third team in NHL history to record seven-plus goals in three straight playoff games. The only teams to have done so: the Oilers in 1985 (Game 4 of DF, Game 1 & Game 2 of CF) and in 1983 (Game 5 of DF, Game 1 & Game 2 of CF).

* The Penguins have never lost a best-of-seven series after taking a 3-1 lead in one that started on the road, with those three victories coming in the 2017 Second Round, 2016 Second Round and the 2000 Conference Quarterfinals. Pittsburgh went on to advance to the Final in two of those three instances (2017 & 2016). 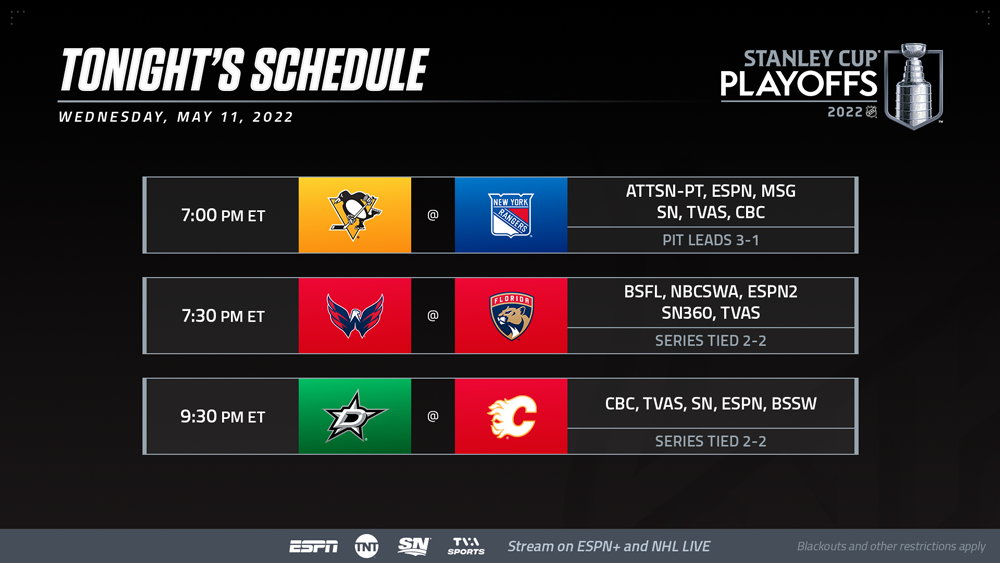