Members of the Professional Hockey Writers Association submitted ballots for the Lady Byng Trophy at the conclusion of the regular season, with the top three vote-getters designated as finalists. The winners of the 2022 NHL Awards will be revealed during the Conference Finals and Stanley Cup Final, with exact dates, format and times to be announced.

Following are the finalists for the Lady Byng Trophy, in alphabetical order:

Connor produced the best offensive season of his six-year NHL career, setting personal highs and ranking among the League leaders in shots on goal (4th; 317), goals (t-5th; 47), game-winning goals (t-6th; 9) and points (13th; 93). Connor – who also established career highs in assists (46), power-play assists (20), power-play points (28) and shorthanded goals/points (3) – finished fourth among NHL forwards in average time on ice (21:47) and 12th among all skaters in takeaways (66). He did so while receiving only four penalty minutes during his 79 appearances – the fewest among the League’s top 100 scorers in 2021-22 (minimum: 50 GP). Connor, a first-time finalist, also is the first Lady Byng Trophy finalist in Jets/Atlanta Thrashers history and is seeking to become the first Winnipeg player (from the current or original Jets) to capture the award.

Spurgeon, last season’s runner-up, topped Wild defensemen in goals (10), assists (30) and points (40) to help Minnesota (53-22-7, 113 points) post its best campaign in franchise history. Spurgeon, who is seeking to become the first Wild player to capture the Lady Byng Trophy, established career highs in assists, points per game (0.62) and power-play assists/points (14) while playing just 65 contests in 2021-22. He did so while also receiving only five minor penalties – the seventh time in his 12 NHL seasons he has been assessed 10 or fewer penalty minutes – and playing an average of 21:09. Only two other players, Spurgeon’s Lady Byng Trophy competition, averaged as much time on ice in 2021-22 while being assessed 10 or fewer penalty minutes (minimum: 10 GP): Slavin (23:32 TOI/GP, 10 PIM) and Connor (21:47 TOI/GP, 4 PIM).

Lady Byng, wife of Canada’s Governor General at the time, presented the Lady Byng Trophy during the 1924-25 season. After Frank Boucher of the New York Rangers won the award seven times in eight seasons, he was given the trophy to keep and Lady Byng donated another trophy in 1936. After Lady Byng’s death in 1949, the NHL presented a new trophy, changing the name to the Lady Byng Memorial Trophy.

* Veterans Nikita Kucherov and Corey Perry both had multiple points to lift the Lightning to a series-opening win over their state rivals. Tampa Bay has an all-time record of 12-2 when taking a 1-0 series lead.

* The remaining two series begin tonight with the Rangers visiting the Hurricanes and the first instalment of the “Battle of Alberta” in 31 years when the Flames host the Oilers.

* The 2022 Stanley Cup Playoffs set new ratings benchmarks after the First Round became the most-watched opening round on U.S. cable ever, with three of the top four all-time First Round games on U.S. cable occurring this past weekend. Across North America, 28 million fans watched the five thrilling Game 7s.

MANSON SCORES FIRST PLAYOFF GOAL IN OT AS AVALANCHE TAKE GAME 1
The Avalanche survived a late-tying goal from Jordan Kyrou with 3:14 remaining in regulation as well as a playoff career-best 51-save performance from Jordan Binnington before Josh Manson scored his first career postseason goal in overtime to give Colorado a Game 1 victory. It marked the Avalanche’s fifth consecutive win to start the 2022 Stanley Cup Playoffs.

* Colorado improved to 5-0 to start the 2022 Stanley Cup Playoffs after also winning each of its first six contests to start the 2021 postseason. The Avalanche became the fourth different team in NHL history to record a playoff-opening win streak of five-plus games in consecutive years and the first since the North Stars in 1980 (5 GP) and 1981 (6 GP).

* Manson became the fourth defenseman in Avalanche/Nordiques history to score an overtime goal in the postseason and second to do so in the 2022 Stanley Cup Playoffs following Cale Makar in Game 2 of the First Round against the Predators. 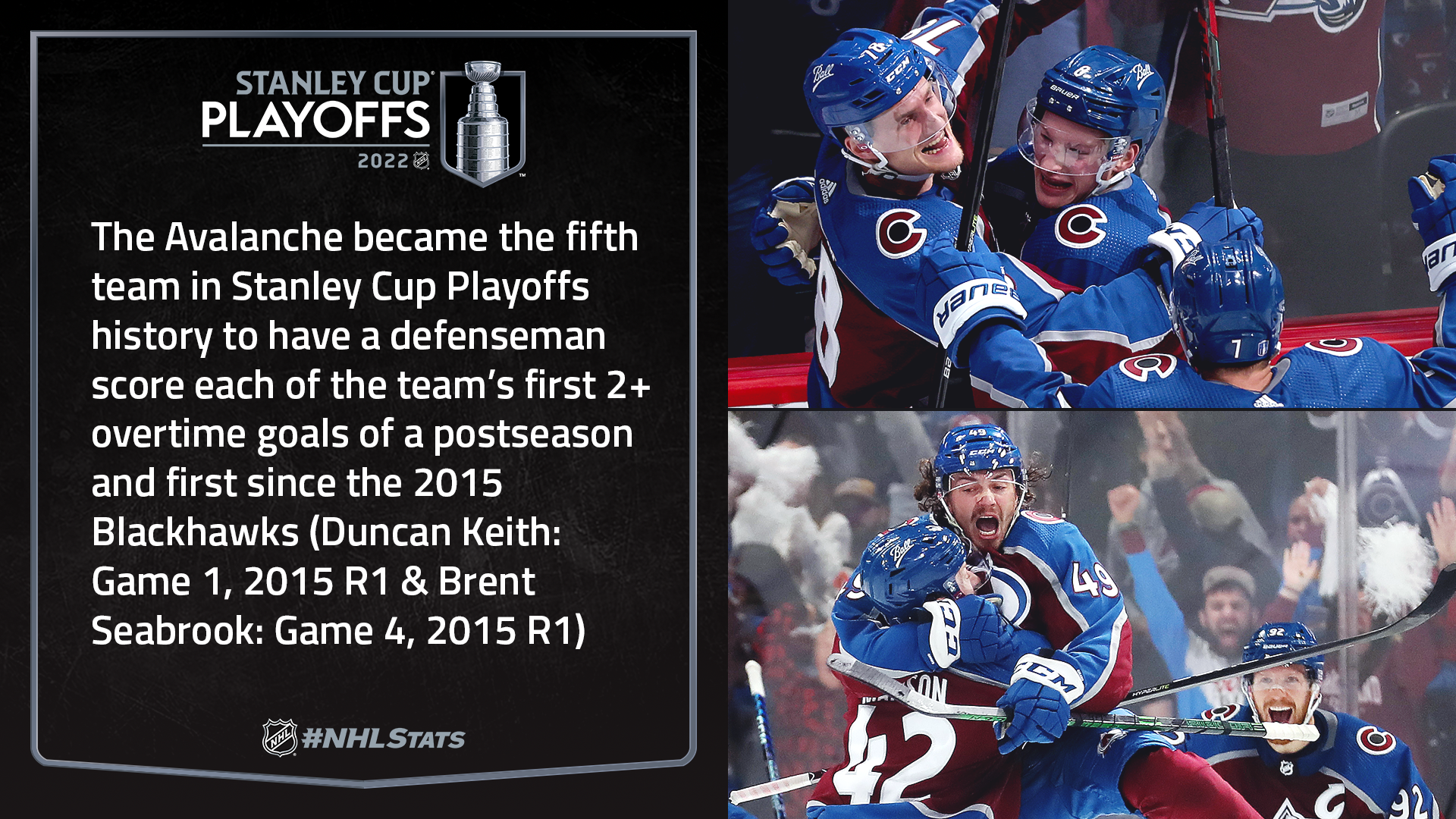 PERRY, KUCHEROV PROPEL LIGHTNING PAST PANTHERS IN GAME 1
After the Panthers took a 1-0 lead, Corey Perry (1-1—2) and Nikita Kucherov (1-1—2) both factored on two of their team’s four unanswered goals to help the Lightning secure a Game 1 win at FLA Live Arena. Tampa Bay is 12-2 (.857) overall when taking a 1-0 series lead.

* Perry, now with at least one playoff point against 17 different franchises, became the second player in Lightning history to record a multi-point game in the Stanley Cup Playoffs at age 37 or older. The other: Dave Andreychuk, who achieved the feat five times and last did so during Game 2 of the 2004 Stanley Cup Final (0-2—2; 40 years, 241 days). 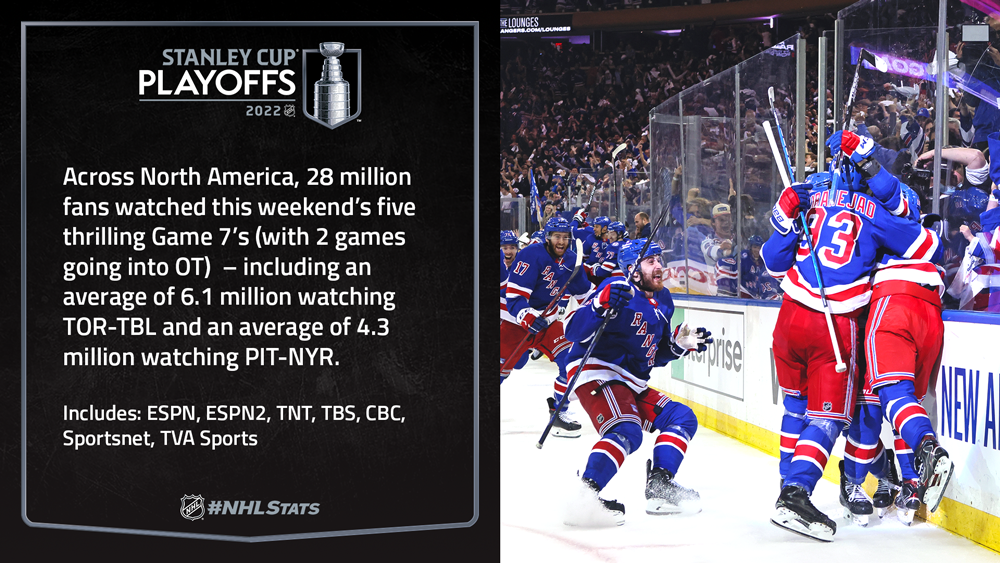 * CHEL Intel – May 17
* The NHL stands with the LGBTQIA+ community

TWO MORE SECOND ROUND SERIES READY TO DROP THE PUCK
Another four teams are ready to get their Second Round series underway when the Hurricanes host the Rangers at PNC Arena and the first “Battle of Alberta” in 31 years caps the evening when the Flames welcome the Oilers to Scotiabank Saddledome. 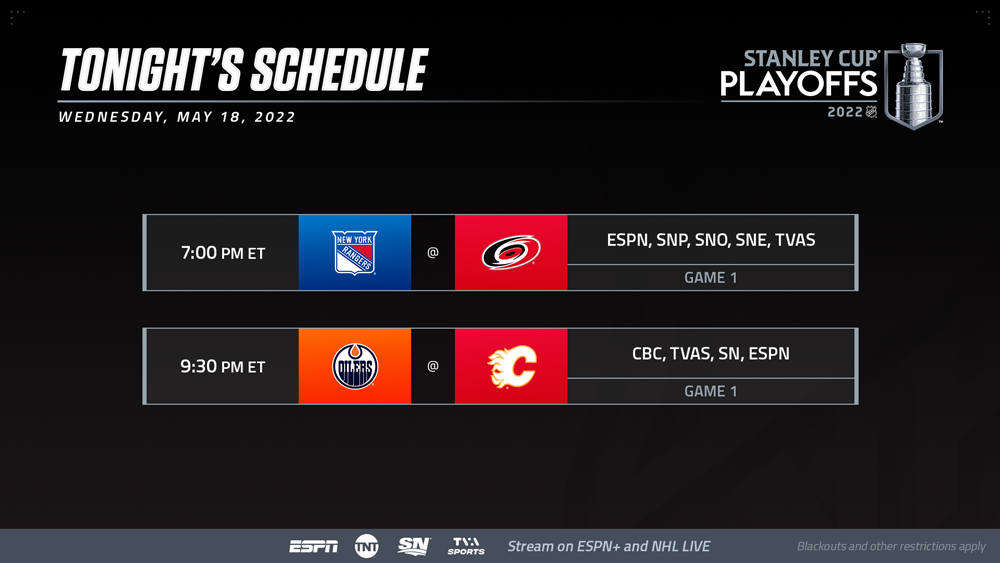 OILERS, FLAMES READY FOR FIRST “BATTLE OF ALBERTA” SINCE 1991
The Oilers and Flames enter the 2022 Second Round coming off home wins in Game 7, setting up the sixth playoff rendition of the ”Battle of Alberta” and first since the 1991 Division Semifinals, which witnessed Edmonton oust Calgary with an overtime win in Game 7. Three of five head-to-head postseason meetings between the clubs have required a seventh-and-deciding game (also 1986 DF & 1984 DF). 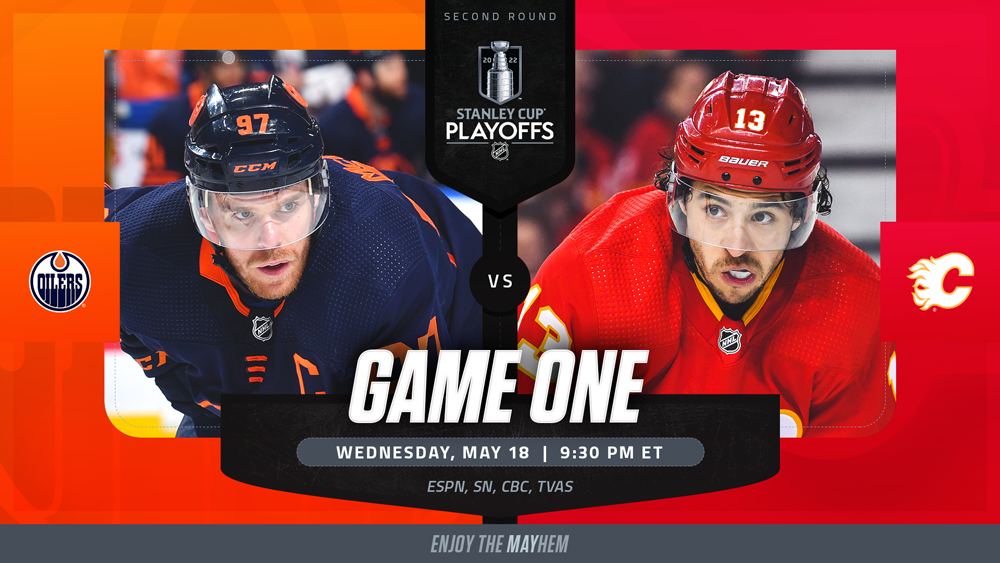 RANGERS, HURRICANES READY FOR FIRST BEST-OF-SEVEN SHOWDOWN
After the two teams met during the 2020 Stanley Cup Qualifiers (CAR: 3-0 W), the Rangers and Hurricanes are set to meet in a best-of-seven series for the first time. The two clubs jockeyed for top spot in the Metropolitan Division as the regular season drew to a close, but Carolina concluded the campaign with a 3-1 advantage in the season series.

* Fresh off becoming the first team in NHL history to win a series by claiming three consecutive comeback wins when facing elimination, the Rangers have their sights set on the Conference Finals for the first time since 2015. Teams that overcome a 3-1 series deficit have gone on to win the subsequent series 13 times (13-16, .448), including eight of the last 10 instances since 2009.

* The Hurricanes lead the 2022 Stanley Cup Playoffs with 18 home goals after winning each of their four home games against the Bruins in the First Round. With a series-opening win against New York, Carolina can match its franchise record for longest home win streak to start a postseason first set in 2019 (5-0 from Game 3 of R1 – Game 4 of R2). 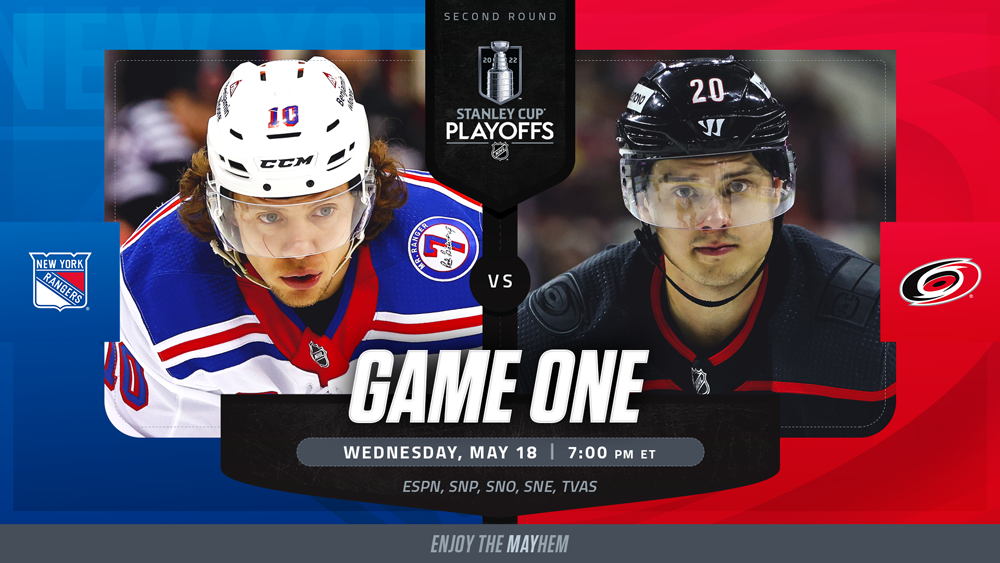