* After 23 goals in Calgary (the highest combined total through two games of a series in 35 years) – with each contest seeing the Flames hold multi-goal leads and the Oilers tie the score – the “Battle of Alberta” will shift to Edmonton tied 1-1 following an Oilers win in Game 2.

* Connor McDavid recorded his NHL-leading 20th point of the 2022 Stanley Cup Playoffs and is producing at a pace last seen 30 years ago.

* Sebastian Aho factored on each of Carolina’s goals and climbed multiple franchise lists in the process as the Hurricanes set a franchise record for longest home win streak and skated to a 2-0 series lead.

* The Second Round series between the Avalanche and Blues will shift to St. Louis – the lone contest slated for Saturday. When a best-of-seven series is tied 1-1, the winner of Game 3 goes on to win 67% of the time.

McDAVID CAN’T BE CONTAINED: OILERS OVERCOME DEFICIT TO TIE SERIES
With his team facing a 2-0 deficit for the second straight game, Connor McDavid (1-1—2) assisted on a goal by Duncan Keith (1-2—3) to get the Oilers on the board and then dazzled with yet another highlight-reel tally himself. McDavid’s goal was the first of four unanswered by Edmonton, which evened the series at 1-1 as it shifts to Rogers Place. 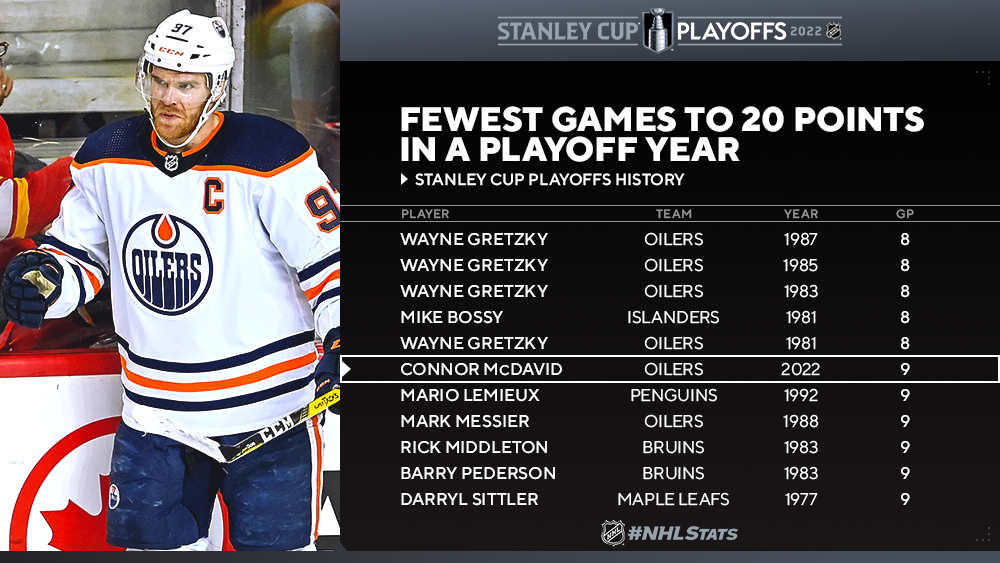 * The Oilers captain, who became the second player in NHL history to record eight multi-point performances in his first nine games of a postseason (also Darryl Sittler in 1977 w/ TOR), extended his multi-point streak to five playoff contests. The only players in NHL history with a longer run are Wayne Gretzky (8 GP in 1983), Tony Currie (7 GP in 1981), Sittler (7 GP in 1977), Evgeni Malkin (6 GP in 2009) and Dale Hawerchuk (6 GP in 1993).

* Keith (38 years, 308 days) became the oldest player in Oilers history to score a playoff goal and the third-oldest defenseman in NHL history to record three-plus points in a postseason game.

* Leon Draisaitl (1-2—3) recorded a game-high three points (tied) and scored the final goal of the contest. The Oilers and Flames have combined for 23 goals through Game 2, matching the second-highest goal total through two contests of a series in Stanley Cup Playoffs history, behind only the 1981 Preliminary Round series between the North Stars and Bruins (24 G).

GAUDREAU EXTENDS POINT STREAK, FLAMES ADD TO SECOND ROUND GOAL TOTAL
Johnny Gaudreau assisted on two of Calgary’s three goals to extend his point streak to seven games, the longest postseason run by a Flames player in over 30 years. Calgary now has 12 goals in the Second Round, tied for its second-highest total through the first two contests of any series, behind only the 1988 Division Semifinals (15) against Los Angeles. 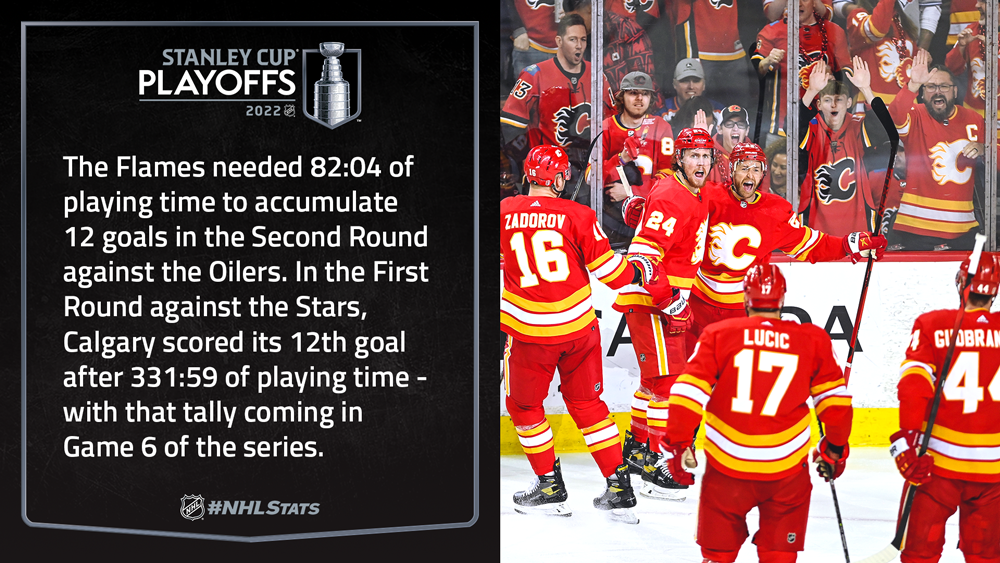 AHO, RAANTA, SMITH GUIDE HURRICANES TO 2-0 SERIES LEAD
Sebastian Aho (1-1—2) factored on both Carolina goals and climbed multiple franchise lists in the process as the Hurricanes improved to 6-0 at PNC Arena this postseason. The club set a franchise record for the longest home winning streak in a postseason and became the first team since 2017 (NSH) to win each of its first six playoff home games. The last team to record a longer home winning streak to start a postseason was Chicago in 2014 (7-0).

* Aho boosted his career postseason totals to 18-25—43 (43 GP), tying Eric Staal for the franchise lead in points, Ron Francis for the most assists in franchise history and Rod Brind’Amour (18) for second place in goals (behind Staal: 19).

* Antti Raanta (21 saves) recorded his first career playoff shutout after allowing just one goal on 28 shots in Game 1. This marks the second time the Hurricanes have allowed no more than one goal against through two games of a playoff series – they also did so in the 2019 Second Round versus the Islanders (1 GA in 2 GP).

* Brendan Smith (1-0—1) scored his third career playoff goal and first in nine years (Game 2 of 2013 CSF vs. CHI) and became the second defenseman in Hurricanes/Whalers history to record a shorthanded goal in the playoffs. The second straight defenseman to score a game-winning goal for Carolina, Smith became the first blueliner in a decade to have a shorthanded tally stand as a game winner in the postseason. 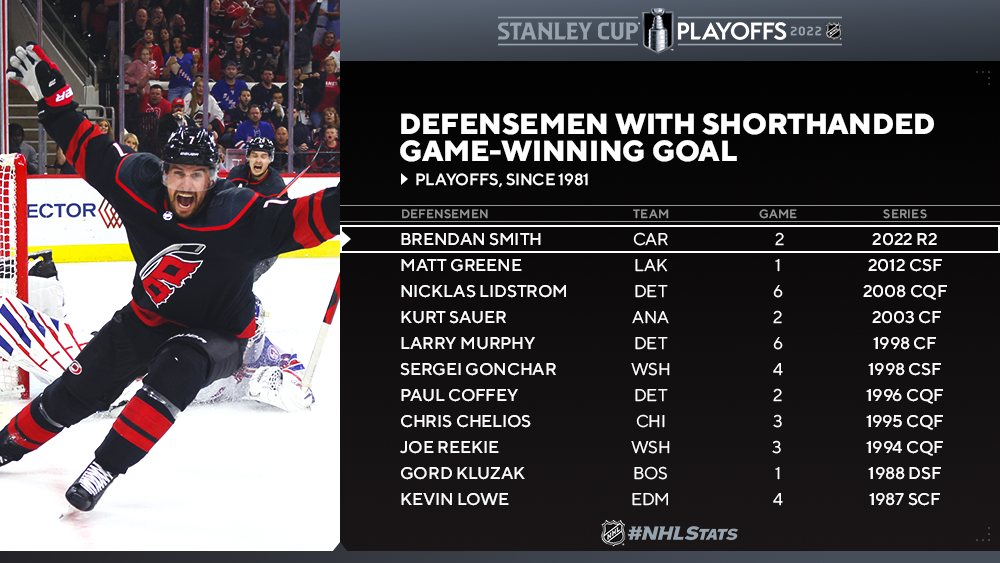 DID YOU KNOW?
Friday marked the second time in Stanley Cup Playoffs history that a day with two games had a shorthanded goal stand as the game winner in each contest. The other instance was May 13, 2006, when the Devils defeated the Hurricanes in Game 4 (Jay Pandolfo SH GWG) and the Sabres bested the Senators in Game 5 (Jason Pominville SH GWG).

AVALANCHE, BLUES READY TO CLASH FOR SERIES LEAD
After David Perron and the Blues took down Gabriel Landeskog and the Avalanche in Game 2, their Second Round showdown shifts to St. Louis, with both clubs looking to snag the series lead. When a best-of-seven series is tied 1-1, the winner of Game 3 goes on to win 67% of the time (229-115; .666). 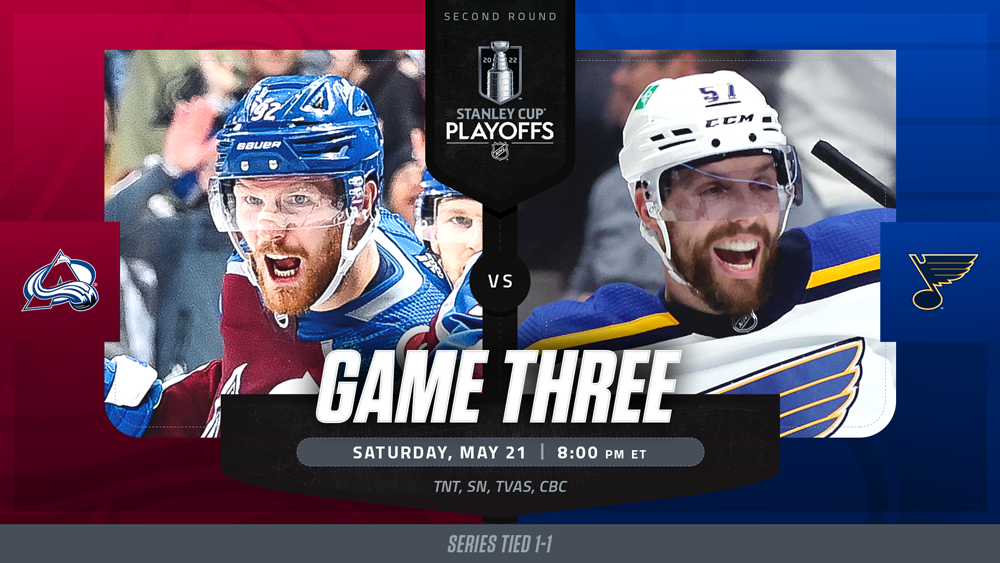 * Cale Makar, who led the Avalanche in road goals during the regular season (16-29—45 in 37 GP), has collected a team-best six points as a visitor in the 2022 Stanley Cup Playoffs (1-5—6 in 2 GP) and looks to help Colorado avoid consecutive losses. Prior to clinching the top seed in the Western Conference on April 16, the Avalanche lost consecutive games only five times in 2021-22 including twice since the first week of November (2 GP from March 3-5 & March 8-10).