* Comebacks were the theme of the Stanley Cup Playoffs on Friday, with the Panthers rallying from a deficit to win for the third consecutive game to earn their first playoff series win in 26 years, while the Rangers stormed back from a multi-goal deficit to stave off elimination for the second straight game to force a Game 7 with the Penguins on Sunday.

* It has been a rollercoaster of a week for fans across the NHL, with 11 come-from-behind victories over the past five days, including four multi-goal comeback wins through that span. The week of “Mayhem” will conclude with five Game 7s over the weekend, starting with three on Saturday followed by two on Sunday.

* The Stars edged the Flames to force the first-ever Game 7 between the two franchises. Among teams to face each other in a Game 7 for the first time, the home team holds an all-time record of 66-50 in those contests (excludes the 2020 postseason).

‘COMEBACK CATS’ RALLY AGAIN, CAPTURE FIRST SERIES WIN SINCE 1996
After the Panthers overcame two separate one goal deficits and T.J. Oshie tied the contest for the Capitals with 1:03 remaining in regulation, Carter Verhaeghe netted the game-winning tally for the third straight outing to help Florida capture its first playoff series win since the 1996 Conference Finals.

* The Panthers became the 17th team in NHL history to record three or more consecutive comeback wins to close out a series and ninth in the past 30 years. The Golden Knights were the last team to achieve the feat after doing so from Games 3-6 of the 2021 Second Round against the Avalanche. 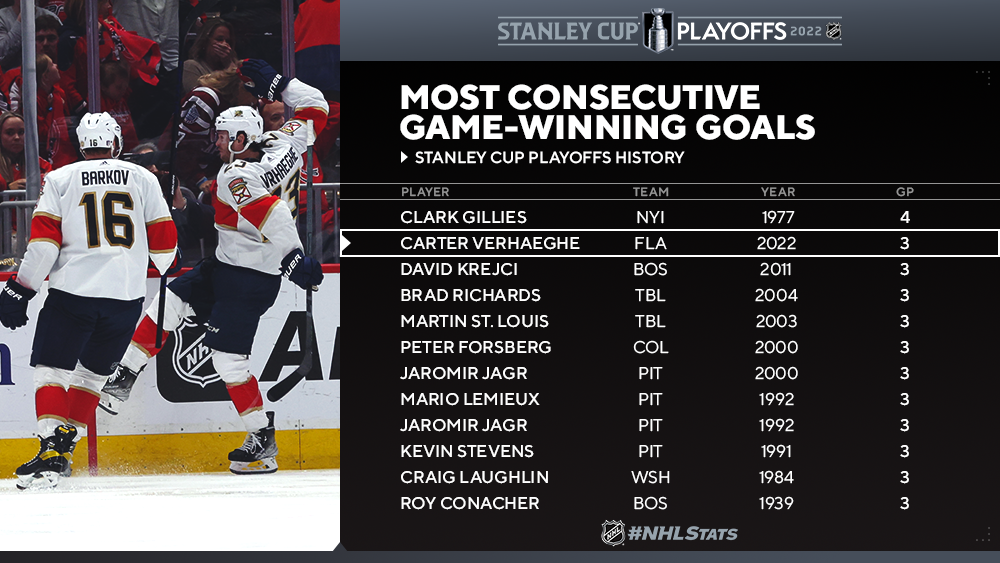 * Verhaeghe concluded the First Round with 6-6—12 (6 GP) and currently sits in a tie with Connor McDavid (3-9—12 in 6 GP) for the most points among all skaters in the 2022 Stanley Cup Playoffs. His totals also marked the most goals and points in a single playoff series by a Panthers player in franchise history.

* The Panthers will face either the Maple Leafs or Lightning in the Second Round. Florida has never matched up against Toronto in the Stanley Cup Playoffs and has faced Tampa Bay just once during the 2021 First Round (2-4 L).

DYK? Florida’s head coach Andrew Brunette had just concluded his rookie campaign with the Capitals when the Panthers last won a playoff series in 1996. He posted 1-3—4 in six games during Washington’s Conference Quarterfinals loss to Pittsburgh (L 2-4).

RANGERS EXPERIENCE DEJA VU EN ROUTE TO FORCING GAME 7. . .
For the second time in as many games, the Rangers fell behind 2-0, took a 3-2 lead, watched the Penguins tie the contest and then benefited from a third-period tally to stave off elimination. This time, it was the trio of Mika Zibanejad (2-2—4), Adam Fox (0-4—4) and Chris Kreider (2-0—2) who helped New York force a Game 7 after trailing a series 3-1 for the fourth time in franchise history. 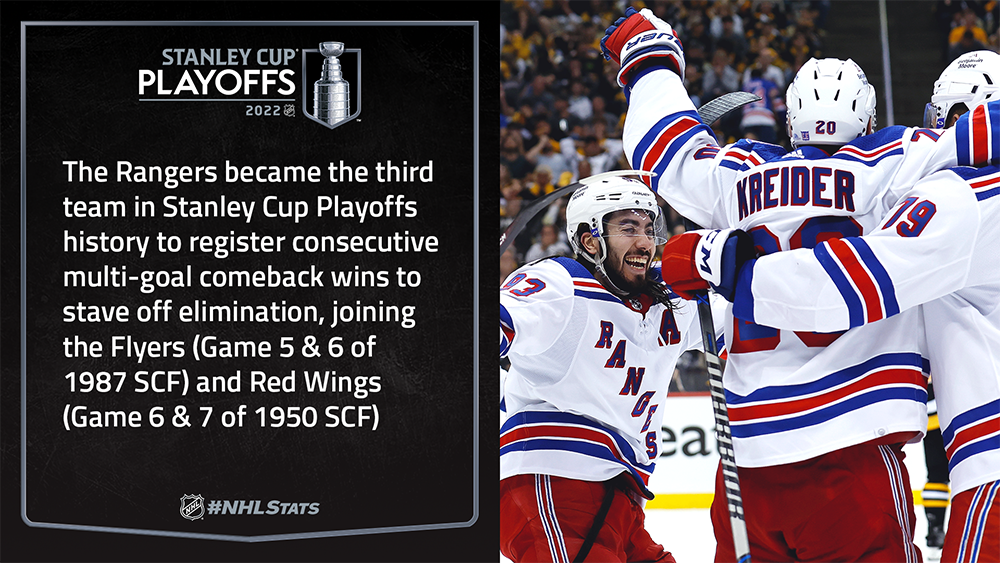 * Zibanejad, who collected 2-1—3 in the second period, matched the franchise record for points in a Rangers playoff period, a feat last accomplished by J.T. Miller (0-3—3) during the second period of Game 2 of the 2016 First Round – also against the Penguins. Only one skater in Rangers history has recorded more points in a potential elimination game than Fox and Zibanejad: Derick Brassard (3-2—5) in Game 6 of the 2015 Conference Finals.

* Kreider scored the game winner with 1:28 remaining in regulation, marking the second-latest go-ahead goal in Rangers playoff history behind Cam Connor (58:51: Game 3 of 1982 DSF). In the process, he netted his eighth career game-winning goal in the postseason and eclipsed Mark Messier (7) for the most in franchise history.

. . . WHILE STARS PUSH TOP SEED IN PACIFIC TO A SEVENTH-AND-DECIDING GAME
Miro Heiskanen scored the game winner and Jake Oettinger made 36 saves as the Stars defeated the Flames at American Airlines Center to force a Game 7. Heiskanen became the first Stars/North Stars defenseman to score in a potential series-elimination game since Trevor Daley tallied twice in Game 6 of the 2014 First Round. 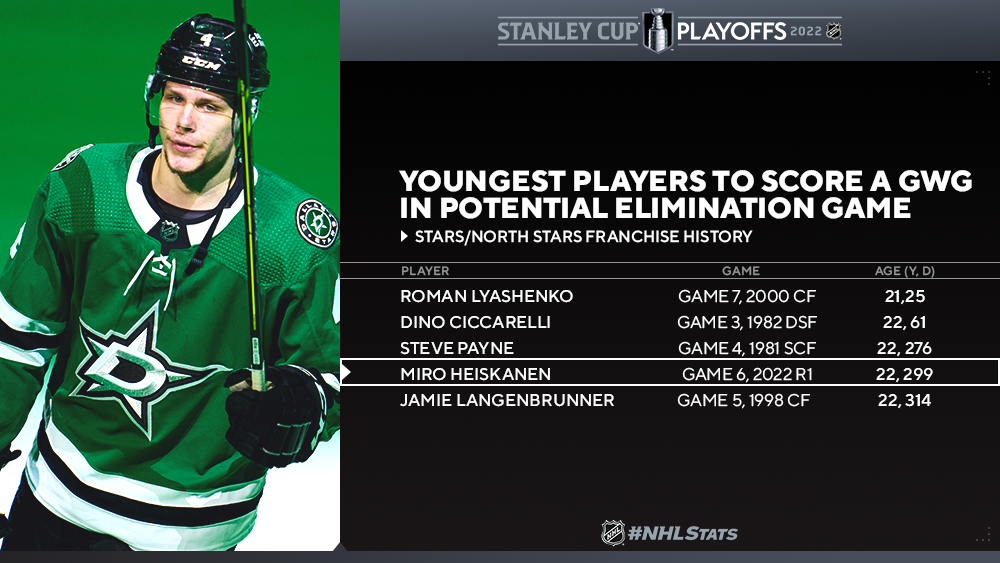 * Dallas and Calgary are set for their first-ever Game 7 meeting on Sunday. Among teams to face each other in a Game 7 for the first time, the home team holds an all-time record of 66-50 in those contests (excludes the 2020 postseason).

The “Mayhem” theme of the First Round of the Stanley Cup Playoffs reaches a crescendo this weekend when the highest-scoring opening round in 27 years (6.65 G/GP) concludes with five Game 7s over a two-day span starting with a tripleheader on Saturday. 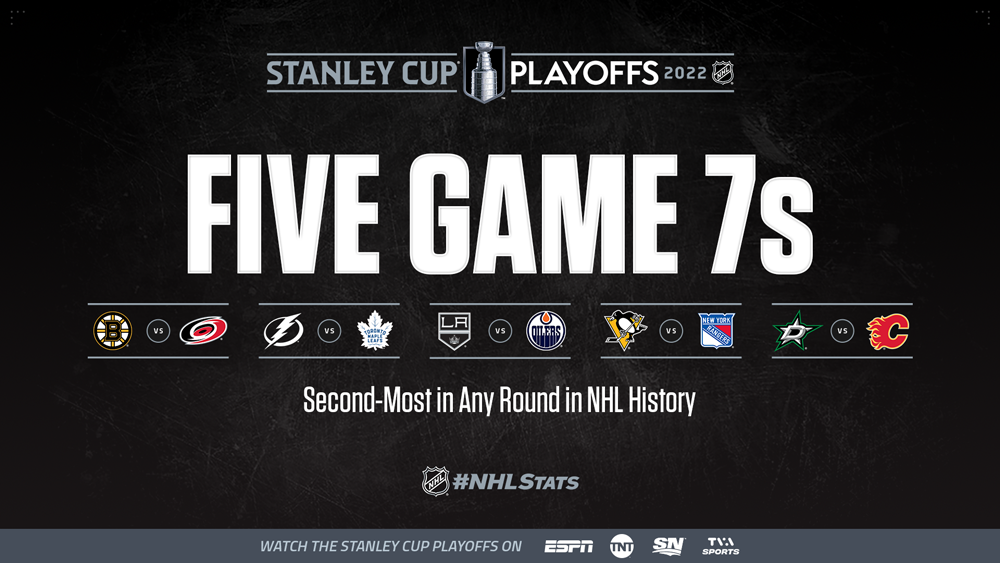 * The five Game 7s in the 2022 First Round are the second-highest total in a single round in NHL history, trailing only the 1992 Division Semifinals (6).

* Eight of the past 10 Stanley Cup champions have won at least one Game 7. 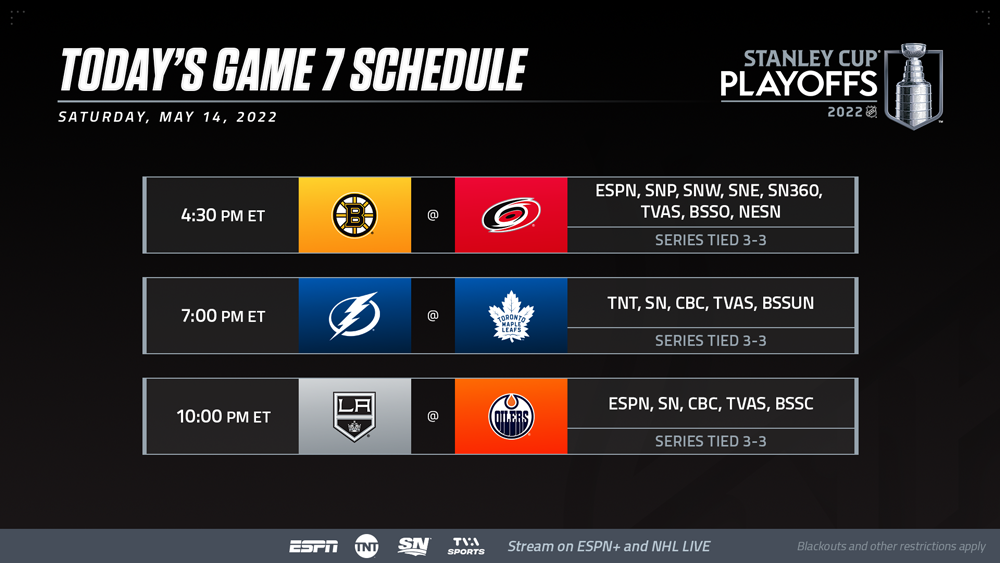 A Stanley Cup Playoffs record will be set or tied with the result of the third Game 7 meeting between the Bruins and Hurricanes/Whalers, as Boston vies for its 16th all-time Game 7 victory and Carolina aims to extend its Game 7 winning streak to six contests.

* Bruins captain Patrice Bergeron is set to appear in his 13th career Game 7, tying Patrick Roy and Scott Stevens for second place on the NHL’s all-time list behind only Zdeno Chara (14 GP). Bergeron has collected 6-4—10 in his 12 previous Game 7s and sits one goal shy of tying Justin Williams (7 G in 9 GP) and Glenn Anderson (7 G in 11 GP) for the most in League history.

* Alternatively, Sebastian Aho will skate in his second career Game 7 after first doing so against the Capitals during the 2019 First Round (1-0—1). Aho can become the sixth active player to score in each of his first two career Game 7s, joining Max Pacioretty, Tyler Myers, Bryan Rust, Tanner Pearson and James van Riemsdyk (all 2 GP).

The Maple Leafs will take a second crack at advancing to the Second Round of the 2022 Stanley Cup Playoffs, when they host the Lightning at Scotiabank Arena and attempt to become the 18th team to eliminate the defending Stanley Cup champions in a Game 7.

* Coming off the first 60-goal season in Maple Leafs history, Auston Matthews looks to lead Toronto to its first series victory since the 2004 Conference Quarterfinals against Ottawa. Teams that featured a player with 60-plus goals in the regular season hold an all-time record of 7-8 in Game 7 during the ensuing Stanley Cup Playoffs. Pavel Bure and the Canucks recorded the last such victory during Game 7 of the 1994 Conference Quarterfinals.

* Steven Stamkos and the Lightning continue their quest for a third straight Stanley Cup and have won two potential elimination games to this point during their run, following Game 6 against the Maple Leafs and Game 7 of the 2021 Stanley Cup Semifinals against the Islanders. Among the five Stanley Cup streaks of three-plus consecutive years in NHL history, only one champion won multiple elimination games across the stretch: Toronto, all of which came during the 1964 postseason (2 in SF, 2 in SCF).

The 2022 First Round marks the second all-time Game 7 between the Oilers and Kings with the first taking place during the 1989 Division Semifinals, which also marked Wayne Gretzky’s first postseason with Los Angeles after being traded to the club from Edmonton in the offseason.

* Jonathan Quick (4-0, 1.95 GAA, .940 SV%) is set compete in a Game 7 for the fifth time in his career, which trails only Marc-Andre Fleury (8x) and Braden Holtby (8x) for the most among active goaltenders. The NHL’s all-time leader in playoff shutouts among U.S.-born goaltenders will look to become the first netminder in NHL history to win each of his first five Game 7s.

*Alternatively, Sebastian Aho will skate in his second career Game 7 after first doing so against the Capitals during the 2019 First Round (1-0—1). Aho can become the sixth active player to score in each of his first two career Game 7s, joining Max Pacioretty, Tyler Myers, Bryan Rust, Tanner Pearson and James van Riemsdyk (all 2 GP). 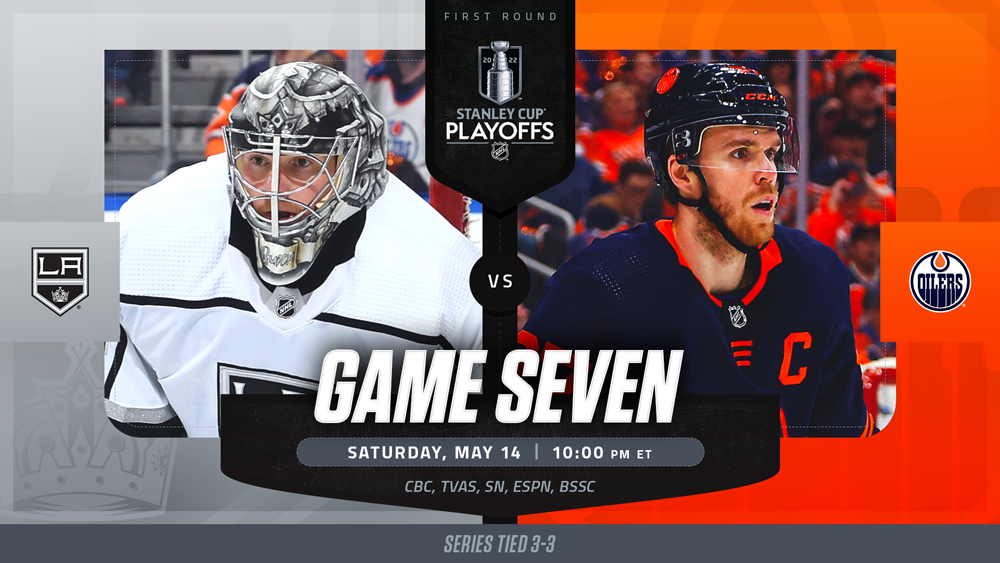