* There is nothing like a Game 7 in the Stanley Cup Playoffs and we are guaranteed three of them Saturday, with the potential to add three more after Friday’s action. The NHL released start times for all three Game 7s on Saturday starting with the Bruins and Hurricanes at 4:30 p.m. ET.

* St. Louis became the second team to advance to the 2022 Second Round and will face the only other team who has moved on so far – Colorado.

* Brayden Point showcased his playoff specialty of big goals yet again in overtime, scoring the winner with 1:56 remaining in extra time to keep the Lightning’s attempt at a three-peat alive.

* Evander Kane scored twice to help the Oilers stave off elimination – his First Round goal total now trails only Jari Kurri and Mark Messier for the most in a series in franchise history, while Brad Marchand scored his 10th goal when facing elimination, the most by a Bruins player.

THREE GAME 7s SET FOR SATURDAY, THREE MORE COULD COME AFTER FRIDAY
The Bruins, Lightning and Oilers all earned Game 6 wins to force a Game 7 on Saturday and victories by the Rangers, Capitals and Stars on Friday could add three more winner-take-all contests Sunday. Should all come to pass, six Game 7s would match the most in a single round in Stanley Cup Playoffs history (6 in 1992 DSF). 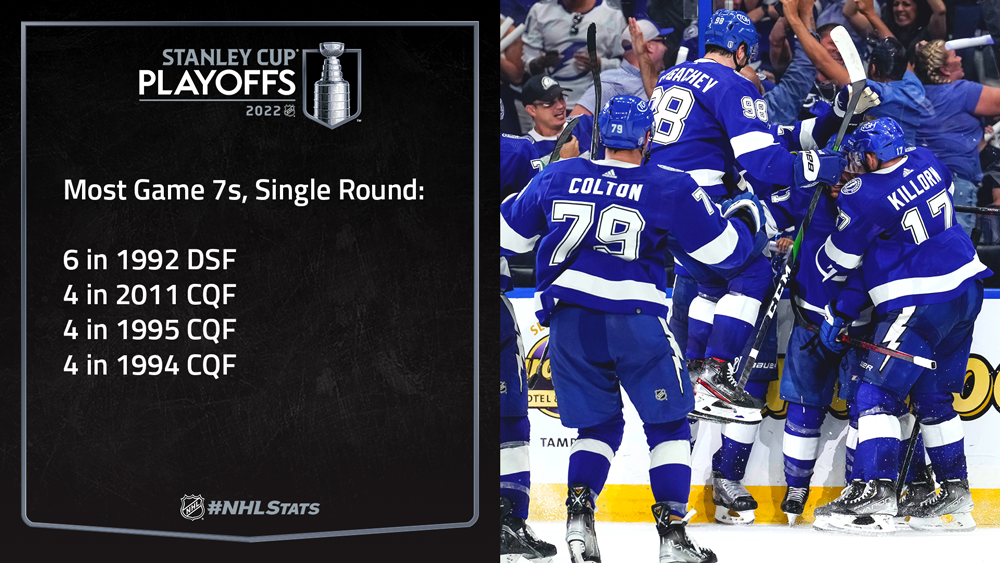 BLUES BECOME SECOND TEAM TO ADVANCE, SET MATCHUP WITH AVALANCHE
Ryan O’Reilly and Vladimir Tarasenko each scored their fifth goal of the 2022 Stanley Cup Playoffs and Jordan Binnington turned aside 25 of the 26 shots he faced as the Blues earned their first series win since they hoisted the Stanley Cup in 2019 and became the second team to advance to the Second Round. The only two clubs who have advanced also secured a Second Round match up, with St. Louis and Colorado meeting for the second time in as many years.

* O’Reilly (5-3—8 in 6 GP) and Tarasenko (5-1—6 in 6 GP) joined David Perron (5-4—9 in 6 GP) as the second and third Blues players to score five goals in the First Round, establishing the first time in franchise history three skaters have hit the mark in a series. Two Blues players have done so in a series just once before (1988 DSF: Brett Hull & Tony Hrkac). In fact, the trio marked just the 11th instance in NHL history of three teammates recording five-plus goals in a series.

* The Blues will face off against the Avalanche in the Second Round. St. Louis and Colorado have met in the postseason twice with the Avalanche winning both of those series, most recently sweeping the Blues in the 2021 First Round. Nathan MacKinnon led that series in goals and points with 6-3—9 (4 GP).

* St. Louis will attempt to defeat an opponent in a Stanley Cup Playoffs series after being eliminated by that same club during the previous postseason for the fifth time in franchise history. The Blues achieved the feat twice against the Minnesota North Stars (1986 DSF & 1972 QF) and once versus the Blackhawks (1993 DSF) and Sharks (2001 CQF).

POINT POTS OVERTIME WINNER AS LIGHTNING FORCE GAME 7
John Tavares tallied twice in a span of 26 seconds to give Toronto a 3-2 lead at the second intermission, but Brayden Point assisted on the tying goal by Nikita Kucherov and then scored the winner with 1:56 remaining in overtime as Tampa Bay evened its First Round series at 3-3.

* Point scored the third playoff overtime goal of his NHL career – the first was in Game 1 of the 2020 First Round to cap the fourth-longest contest in League history and his second was just over a week later to clinch that same series in Game 5. He matched the franchise record for most postseason overtime goals with the Lightning, a mark set by Martin St. Louis.

* Point potted his seventh career game-winning goal in the playoffs, which trails only Ondrej Palat (9), Tyler Johnson (9) and St. Louis (8) for the most in franchise history. Point has scored all seven of his game winners since the start of the 2020 Stanley Cup Qualifiers, which are the most in the NHL over that span. 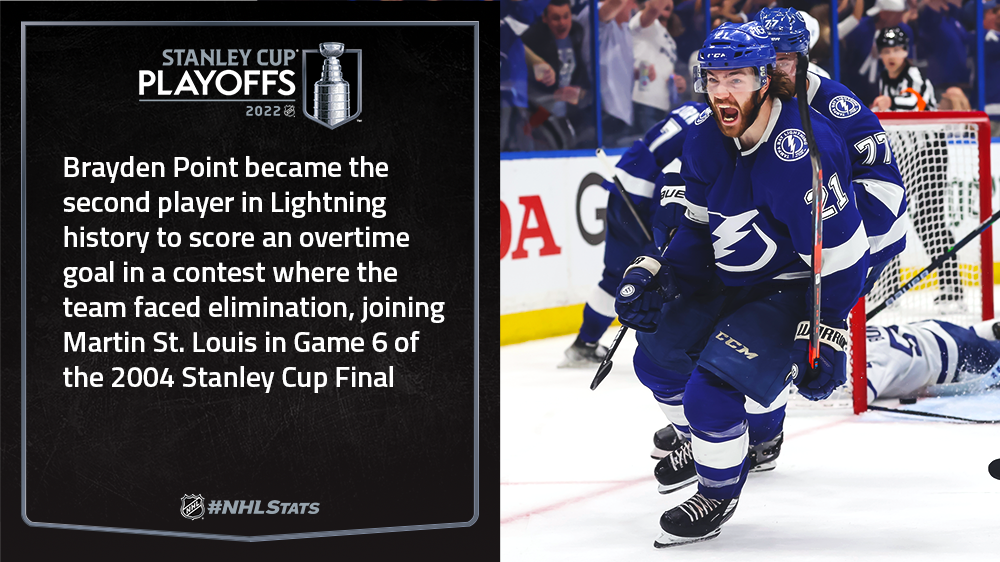 * Point became the second current Lightning player with at least three playoff overtime goals – he joined Corey Perry, who has five career overtime winners in the postseason. Perry is set to contest a Game 7 against the Maple Leafs for the second time in as many years, after he had the winning goal in the 2021 First Round finale to complete the Canadiens’ comeback from a 3-1 series deficit.

* The Lightning will look to keep their three-peat dream alive Saturday when they contest a game in which they can be eliminated for the third time since 2020. Among the five Stanley Cup runs of three-plus consecutive years, only once did the team win multiple games when facing elimination (at any point during their run): the Maple Leafs faced elimination four times during their stretch of three straight championships from 1962 to 1964, all during the last year.

KANE SCORES TWICE TO HELP OILERS FEND OFF ELIMINATION
After the Kings scored 29 seconds into the third period to erase a 2-0 deficit, Tyson Barrie (1-0—1) netted the go-ahead marker with just over five minutes remaining in regulation before Evander Kane (2-1—3) potted his second goal of the contest and seventh of the series, forcing a winner-take-all showdown Saturday in Edmonton. 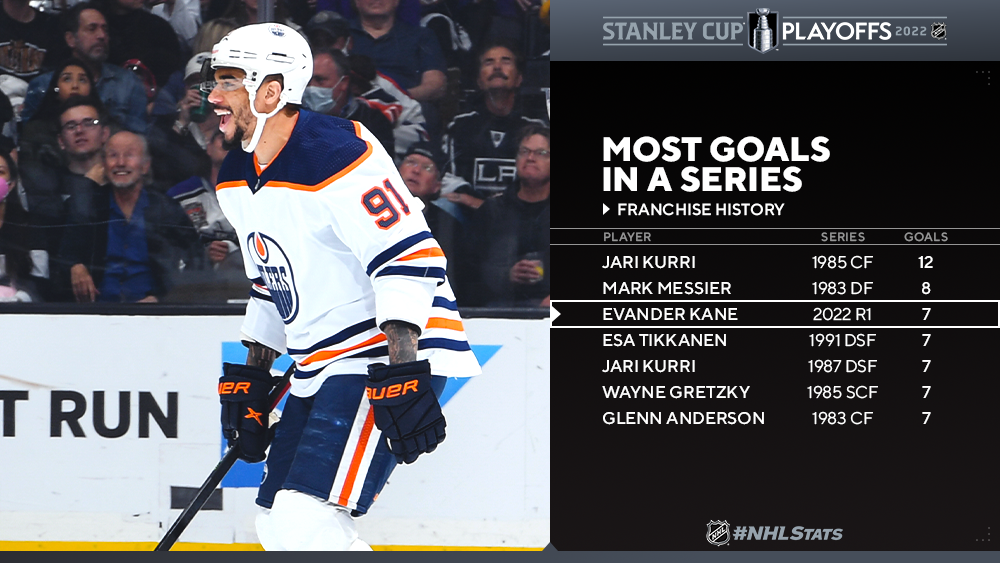 * Kane (7-2—9 in 6 GP) matched Kirill Kaprizov and Jake Guentzel for the most goals among all skaters in the 2022 First Round. Only two active players have more in a single playoff series: Sidney Crosby and Alex Ovechkin, who scored eight each when the Penguins and Capitals went head-to-head in the 2009 Eastern Conference Semifinals.

* Barrie became the first Oilers defenseman to score a game-winning goal when facing elimination in nearly 25 years. Drake Berehowsky and Janne Niinimaa are the only other blueliners to do so for Edmonton after netting the deciding markers in Games 6 and 7 of the 1998 Conference Quarterfinals against the Avalanche.

MARCHAND, BRUINS FORCE WINNER-TAKE-ALL SHOWDOWN IN RALEIGH
The trend of home teams earning the win in the First Round series between the Bruins and Hurricanes continued at TD Garden on Thursday after Brad Marchand (1-1—2) scored the first of five Boston goals and Jeremy Swayman, in his first career game facing elimination, made 23 saves to help the Bruins force a decisive Game 7 in Raleigh on Saturday.

* Swaymanbecame the fifth Bruins rookie goaltender to earn a win when facing elimination and the first to do so since Mike Moffat in Game 6 of the 1982 Division Finals. The others: Don Simmons (Game 4 of 1957 SCF), Frank Brimsek (Game 7 of 1939 SF) and Hal Winkler (Game 2 of 1927 SF).

THREE TEAMS LOOK TO ADVANCE FRIDAY
The Penguins, Panthers and Flames will all look to join Colorado and St. Louis in the Second Round with a Game 6 victory Friday. The Penguins, who are in the postseason for the 16th consecutive campaign (2007 to 2022), will look to win a series for the ninth time during that stretch (last 2018). On the flip side, the Panthers are looking to advance past the opening round for the first time in 26 years, while the Flames strive to do so for the first time in seven seasons. 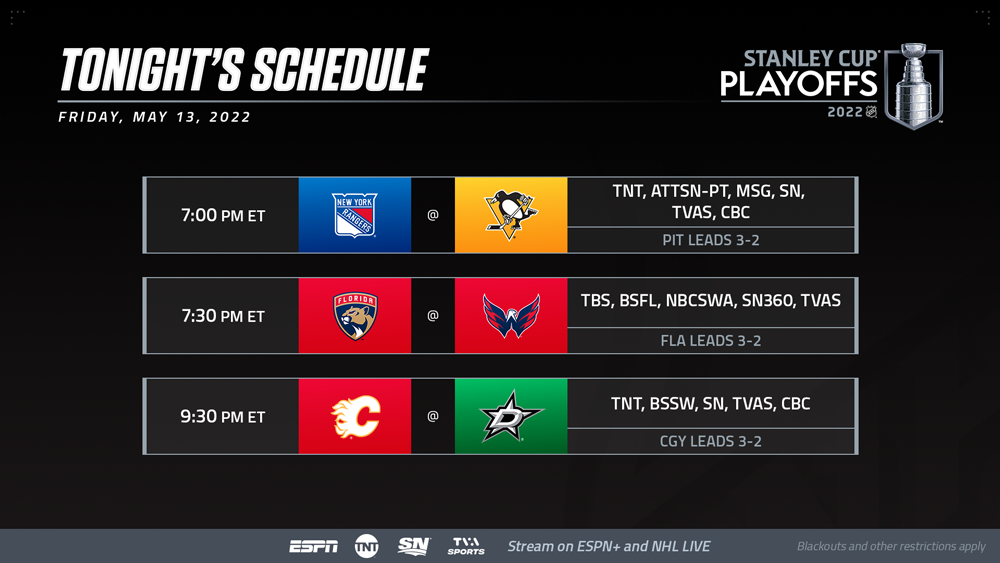