* Cale Makar took over the League lead in points this postseason as the Avalanche swept the Predators and advanced to the Second Round of the 2022 Stanley Cup Playoffs.

* Sidney Crosby reached 200 career playoff points as the Penguins potted seven goals for a second straight game to take a 3-1 lead in their First Round series against the Rangers.

* After leading the NHL with 29 comeback wins during the regular season, the Panthers staged a late rally en route to an overtime victory against the Capitals in Game 4.

COLORADO COMPLETES SWEEP, ADVANCES TO 2022 SECOND ROUND
Cale Makar (1-2—3) assisted on the series-clinching goal by Valeri Nichushkin with 7:58 remaining in regulation as the Avalanche completed a third-period rally to sweep the Predators and become the first team to advance to the Second Round of the 2022 Stanley Cup Playoffs.

* Makar concluded the First Round with 10 points, which leads the NHL and are the most in League history by a defenseman through four games played in a postseason. Makar became the first blueliner in Avalanche/Nordiques franchise history with a double-digit point total in a playoff series and just the fourth active NHL defenseman to achieve the feat, following Kris Letang (2013 CSF), Ryan McDonagh (2014 CF) and Brent Burns (2019 R2).

* Makar became the first blueliner in League history with 10 points in a four-game series. The last NHL forward with a double-digit total in a series which spanned four contests was Red Wings right wing Johan Franzen, who had nine goals and one assist against the Avalanche during the 2008 Conference Semifinals.

* The Avalanche swept a best-of-seven series for the second time in as many postseasons and fourth time in franchise history, with each instance coming since they relocated to Denver (also 1996 SCF, 2001 CQF & 2021 R1). Colorado also became the first NHL team in 22 years to open consecutive postseasons with a four-game sweep – Detroit was the last to do so, during the Conference Quarterfinals in 1999 and 2000.

* ICYMI: The NHL announced Monday that Makar, Victor Hedman and Roman Josi are the three finalists for the 2021-22 James Norris Memorial Trophy, awarded “to the defense player who demonstrates throughout the season the greatest all-round ability in the position.” Click here to read more. 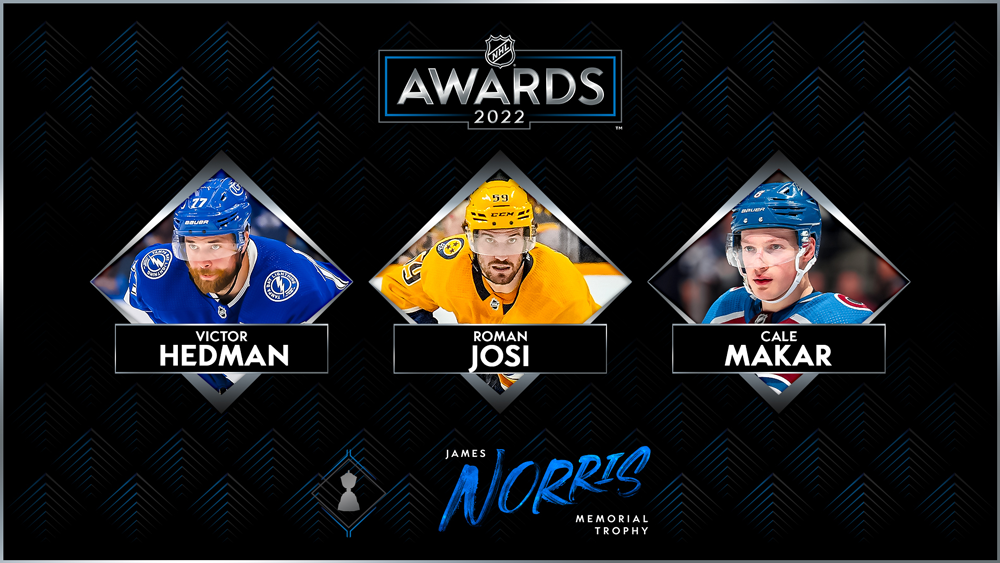 CROSBY COLLECTS 200TH CAREER PLAYOFF POINT AS PENGUINS SCORE SEVEN AGAIN
Sidney Crosby (1-2—3) became the sixth player in NHL history to reach 200 career postseason points as Pittsburgh posted seven goals for a second straight game to take a 3-1 lead in its First Round series. The Penguins scored seven goals in consecutive playoff contests for the first time in franchise history and became just the fourth NHL team to do so in the last 28 years, joining Buffalo in 2006, Philadelphia in 2012 and Colorado in 2020.

* Evgeni Malkin scored the 66th postseason goal of his NHL career to move into sole possession of third place on the franchise’s all-time list and a share of 21st in League history. Malkin also reached 177 career playoff points, passing Jean Beliveau and Sergei Fedorov for the NHL’s 15th-most all-time.

* Jake Guentzel (1-1—2) became the first player in franchise history to score at least one goal in each of Pittsburgh’s first four games from the start of a postseason. Guentzel’s run is also the longest goal streak by a Penguins player at any point in a playoff year since 2010.

* Carter Verhaeghe (2-0—2) scored his first career playoff overtime winner and became just the fourth player in Panthers history to record an OT goal in the postseason, joining Mike Hough (Game 5 of 1996 CSF), Dave Lowry (Game 4 of 1996 CSF) and Ryan Lomberg (Game 3 of 2021 R1). Prior to the winner, Sam Reinhart tied the game with 2:04 remaining in regulation to establish the latest tying goal in franchise playoff history, besting the previous mark by Gustav Forsling (3:07 left in Game 3 of 2021 R1).

* Jonathan Huberdeau (0-1—1) assisted on Reinhart’s tying goal for his 19th career playoff point and surpassed Ray Sheppard for first place on the Panthers’ all-time list. He became the third active player to lead a franchise in regular-season and playoff points, joining Alex Ovechkin with the Capitals and Blake Wheeler with the Jets/Thrashers.

* Despite Jake Oettinger turning aside a storm of shots with 50 saves, Johnny Gaudreau scored a penalty-shot goal and had an assist while Jacob Markstrom (34 saves) held the Stars to one goal at American Airlines Center. Calgary’s 54 shots against Dallas are the third most in a playoff game in franchise history and its most in a contest that did not require overtime (previous best: 52 in Game 2 of 1989 DF).

* The Flames and Panthers have guaranteed their series will require at least six contests, with the Rangers also able to do so in Game 5. Should New York earn a win Wednesday, it would mark the fourth time in NHL history that seven playoff series in the same round will have required at least six games – the 2022 First Round would join the 1992 Division Semifinals (8), 1991 Division Semifinals (8) and 2010 Conference Quarterfinals (7). 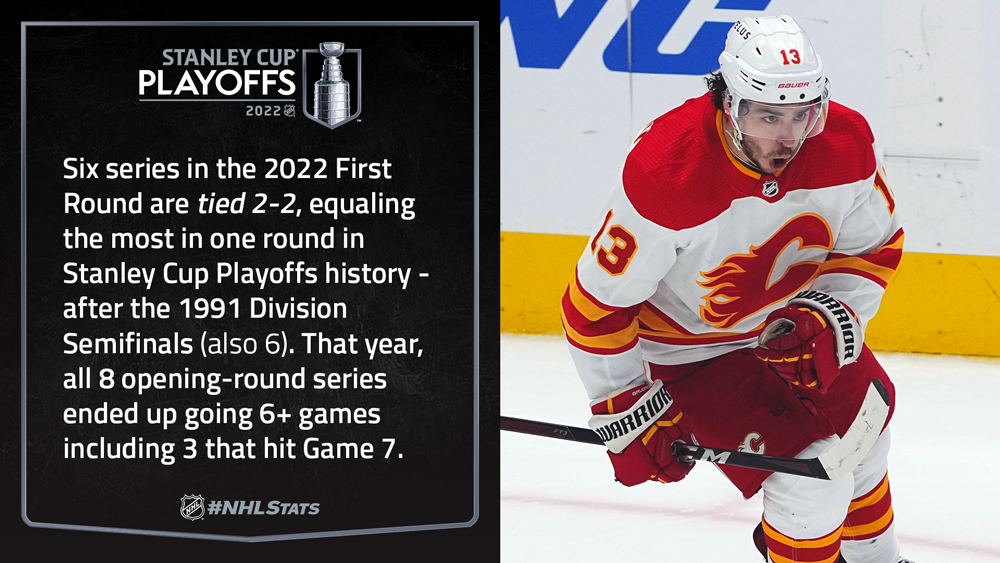 The NHL has launched Stanley Cupple presented by Upper Deck, a daily free-to-play word game designed to challenge the most hard-core hockey fans throughout the 2022 Stanley Cup Playoffs.

* The online game gives fans seven tries to guess the name of an active NHL player (goalies will be excluded as possible answers). After each guess of the NHL player’s name, that player’s biographical and statistical information will appear in each tile – Team, Division, Position, Nationality, Points, Goals and Stanley Cup Wins. Colors indicate how close the user is to guessing the correct NHL player.

PIVOTAL GAME 5s MAKE UP ENTIRE TUESDAY SLATE
For the second time ever, there will be four Game 5s contested on the same day, all with teams looking to break a 2-2 deadlock. The other instance occurred April 11, 1991, when the Bruins (6-1 W vs. HFD), Canadiens (4-3 W vs. BUF in OT), Devils (4-2 W at PIT) and Capitals (5-4 W at NYR in OT) all won to pull ahead 3-2 during the Division Semifinals. That stands as one of two rounds in NHL history to see eight series extend to either six or seven games (also 1992 DSF).