* The Bruins, Blues, Lightning and Kings all earned wins to even their respective series 2-2, meaning at least half of the First Round series will require six games or more. The Panthers, Rangers and Flames will also look to pull even in Game 4s on Monday.

* Prior to his team’s Game 4 victory, Blues captain Ryan O’Reilly narrated a Mother’s Day video tribute to his mom Bonnie, who donated a kidney to save the life of a family friend and with Ryan’s dad Brian, housed 47 foster children while raising their four biological children.

* The trio of Brad Marchand, Patrice Bergeron and David Pastrnak combined for 10 points to help the Bruins draw even with consecutive home wins while the fastest three goals to start a playoff game in Lightning history propelled Tampa Bay past Toronto in Game 4.

* After the Oilers scored eight goals in Game 3, Kings goaltender Jonathan Quick blanked the opposition in Game 4 and became the NHL’s all-time leader in playoff shutouts by U.S.-born goaltenders.

O’REILLY CAPS MOTHER’S DAY TRIBUTE WITH THREE-POINT OUTING
With his mother Bonnie O’Reilly in attendance, Blues captain Ryan O’Reilly (1-2—3) scored his team’s fifth and final goal of the contest as St. Louis drew even in its First Round series with Minnesota. The 2022 opening round marks the second time in three head-to-head meetings the two clubs sit tied through the first four games of a series, after doing so during the 2015 First Round – a showdown the Wild triumphed in six contests.

* Ahead of a pivotal Game 4, O’Reilly narrated a Mother’s Day video tribute, detailing the life of the woman he calls his hero. Back in March 2021, Bonnie saved the life of Graham Nesbitt, a fixture at the local rink in Seaforth, Ont., by donating a kidney to Nesbitt, who was facing total kidney failure. Nesbitt, who ran the town rink, often woke up early to open the facility so Ryan, his brother and other kids in the town could get in an early skate. 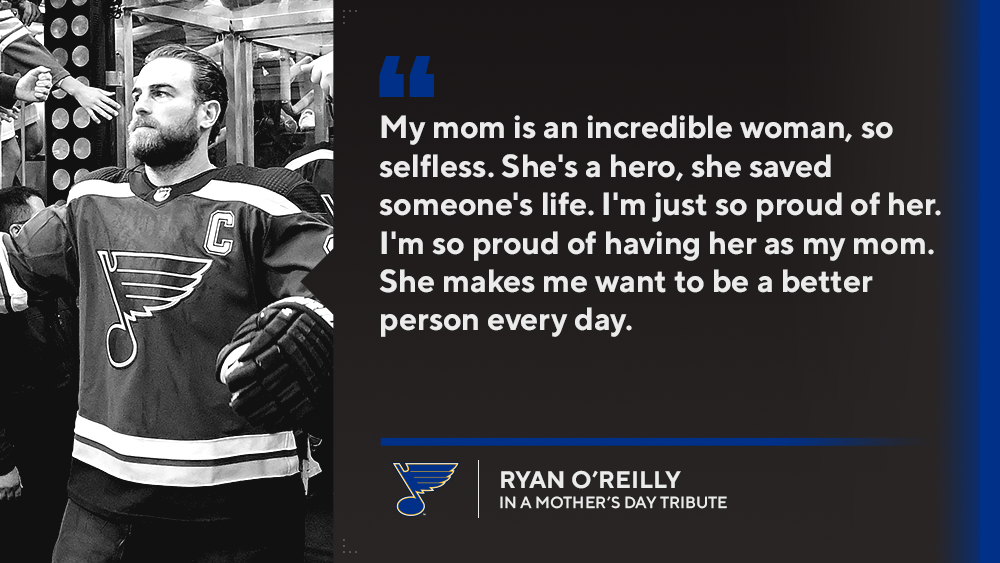 The line of Brad Marchand (2-3—5), Patrice Bergeron (1-2—3) and David Pastrnak (1-1—2) combined for 10 points to help the Bruins pull even in their series with the Hurricanes after consecutive wins at TD Garden. The trio, which was reunited for Game 3 after Boston lost the first two games on the road, combined for 16 points across the two home victories.

* Marchand became the third Bruins player in the past 36 years to post five points in a playoff game, joining Pastrnak (3-3—6 in Game 2 of 2018 R1) and Vladimir Ruzicka (1-4—5 in Game 2 of the 1991 CF). It marked Marchand’s 34th career multi-point game in the playoffs, which ranks second in franchise history behind only Ray Bourque (46). 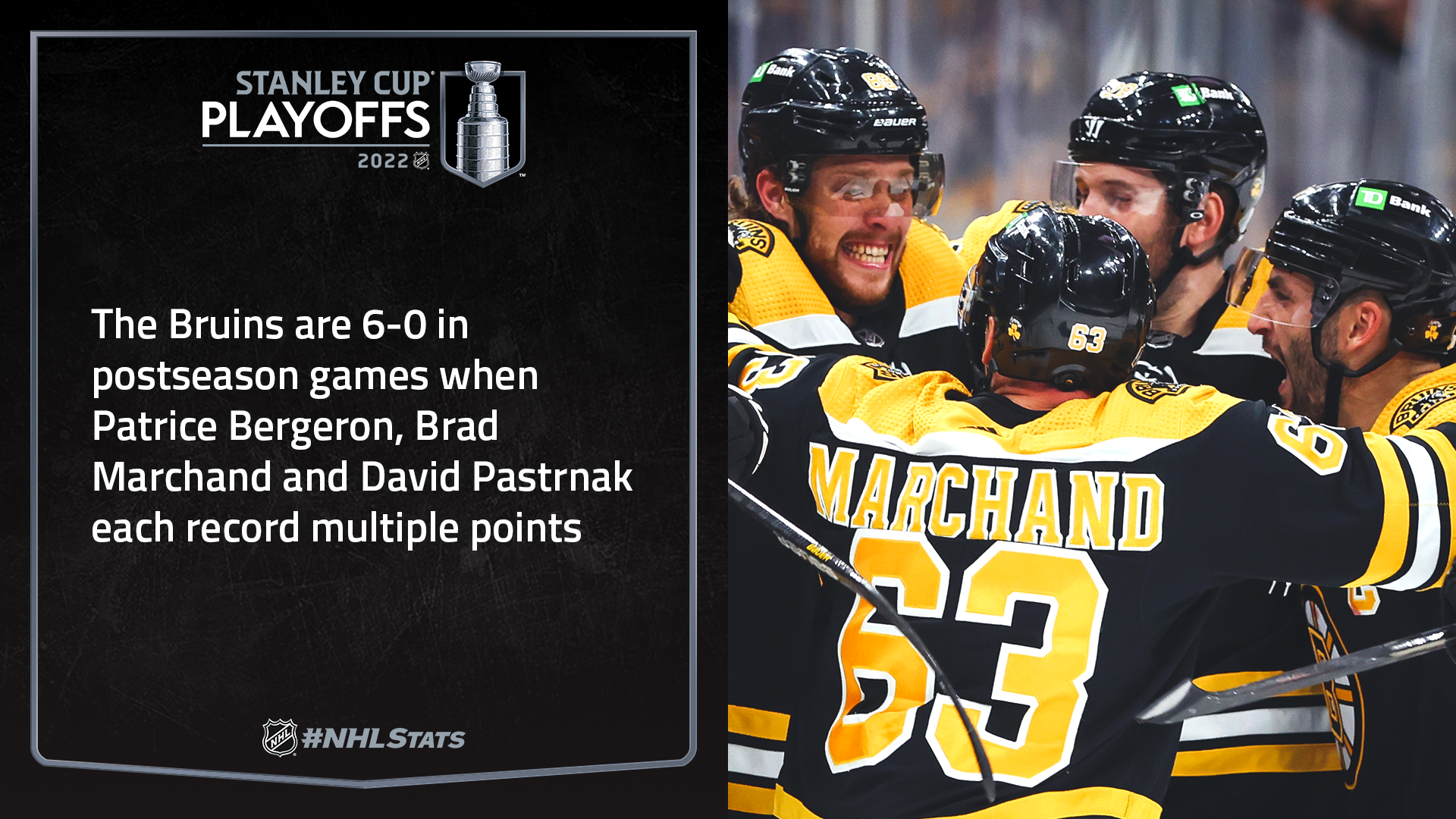 LIGHTNING-QUICK START HELPS TAMPA BAY PULL EVEN WITH TORONTO
Ignited by captain Steven Stamkos (1-0—1), who scored just 60 seconds into the contest, the Lightning found the back of the net three times in the opening 7:58 – and seven times overall – en route to drawing even in their First Round series with the Maple Leafs. In the process, Tampa Bay maintained its reputation of bouncing back, improving to 16-0 following a playoff loss dating to 2020.

* Tampa Bay, which recorded the fastest three goals to start a playoff game in franchise history and fell one shy of the club record for most in a postseason contest overall, has now recorded multiple series-tying wins in a single matchup for the first time since the 2015 First Round (Game 2, 4 & 6). They did so three times against Detroit that playoff year, before advancing to the Second Round and eventually the Stanley Cup Final.

* Nikita Kucherov (0-2—2) recorded his 38th career multi-point playoff game and surpassed Ryan Getzlaf for third most among all active skaters. Only Penguins teammates Sidney Crosby (66) and Evgeni Malkin (52) have more. 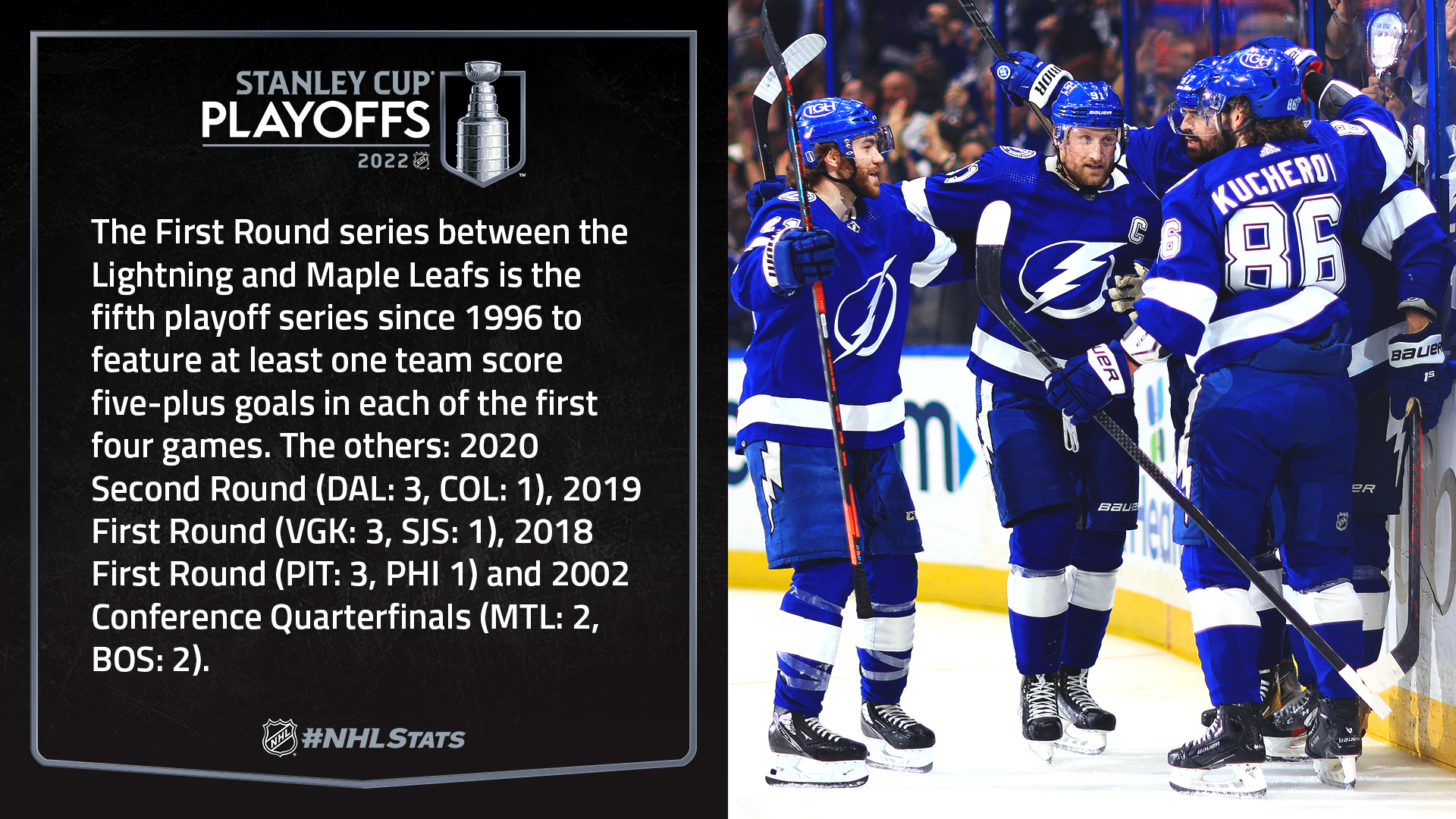 QUICK, KINGS STIFLE OILERS IN GAME 4 VICTORY
Jonathan Quick turned aside all 31 shots he faced – including a flurry of stops in the second period – to record his 10th career playoff shutout and first since Game 3 of the 2014 Stanley Cup Final (7 years, 333 days) as the Kings rebounded from an 8-2 loss in Game 3 to tie their First Round series with the Oilers at two games apiece.

* Quick (Milford, Conn.), who eclipsed Mike Richter (9; Abington, Pa.) for the most playoff shutouts by a U.S.-born goaltender in NHL history, registered the longest stretch between perfect performances in the postseason since Semyon Varlamov (Game 5 of 2009 CQF – Game 5 of the 2020 R1: 11 years, 118 days). 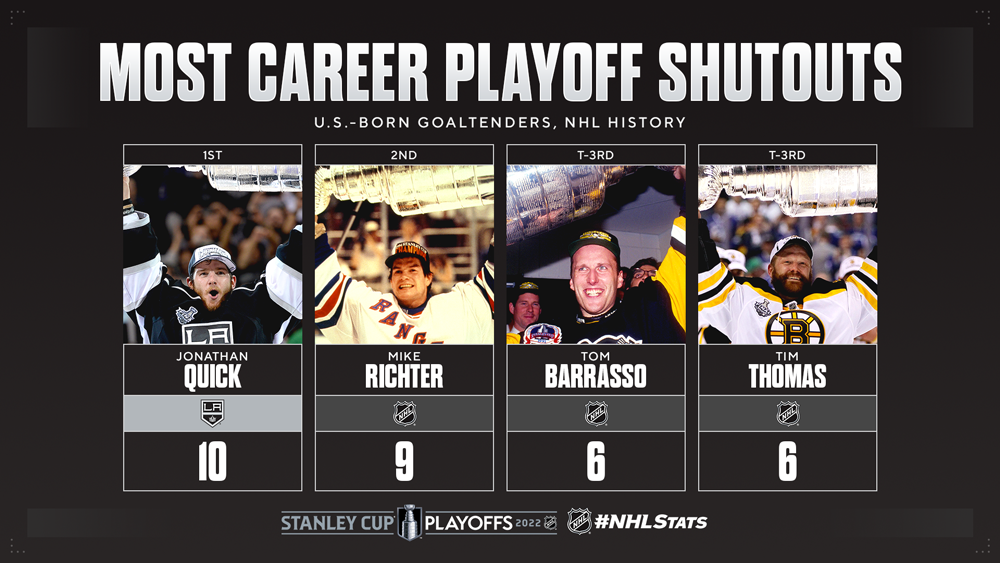 * #NHLStats: Live Updates for Sunday, May 8

* Series Scenarios for Monday, May 9

* Filip Forsberg focused on next game with Predators, not possible final one

* Darcy Kuemper could play Game 4 for Avalanche against Predators

MORE TEAMS EYE SERIES SPLIT WHILE AVALANCHE AIM TO ADVANCE
After four games Sunday featured a team even their First Round series at two games apiece, the Panthers, Rangers and Flames all look to do the same when the puck drops in their respective Game 4s. Teams that take a 3-1 lead in a best-of-seven series hold a series record of 296-30 (.908), while when a best-of-seven series is tied 2-2, the winner of Game 5 holds an all-time series record of 219-58 (.791).

* Alternatively, the Avalanche are looking to complete a First Round sweep for the second time in as many postseasons after doing so in 2021 (4-0 vs. STL). The last team to register an opening-round, best-of-seven sweep in consecutive years was the Red Wings in 1999 (vs. ANA) and 2000 (vs. LAK). 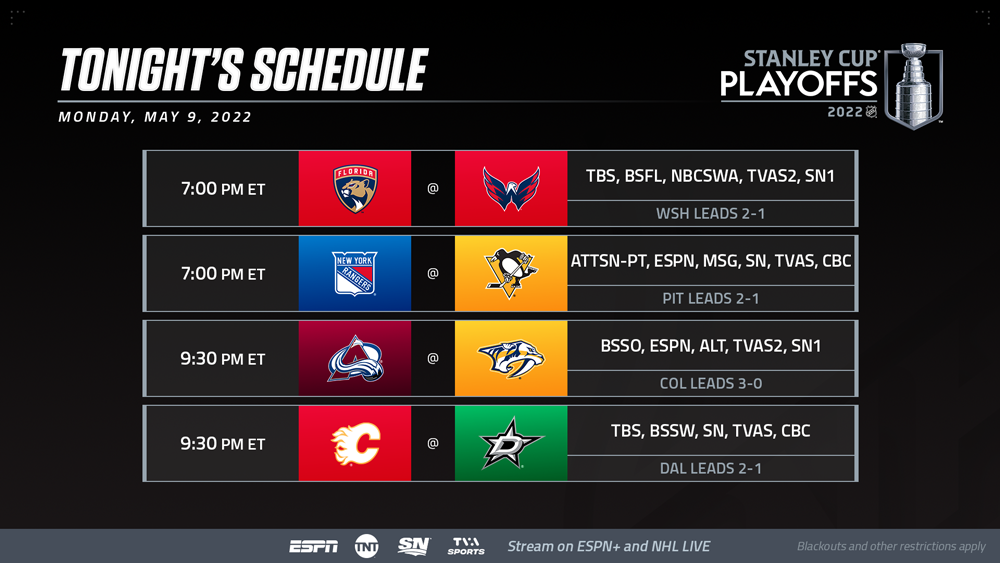