* Sidney Crosby and Alex Ovechkin, two players who have headlined the Stanley Cup Playoffs countless times over the past 15 years, each posted multiple points to help the Penguins and Capitals take a 2-1 series lead.

* Cale Makar tallied his second three-point outing through Colorado’s first three games of the 2022 Stanley Cup Playoffs to take the overall playoff scoring lead as the Avalanche became the only team to go up 3-0 in the First Round.

* Joe Pavelski scored twice, including the game-winning goal for the second straight contest, to help the Stars take a 2-1 series lead in the first postseason game contested in Dallas in over three years.

CROSBY, OVECHKIN CLIMB ALL-TIME LISTS IN HOME WINS
Sidney Crosby (0-2—2) and Alex Ovechkin (1-1—2) each posted multi-point performances to climb a few of the NHL’s all-time playoff lists and help their respective teams skate to a 2-1 series lead. Among active players, the Penguins captain is the playoff points leader (70-127—197 in 177 GP) while the Capitals captain sits atop the postseason goals category (72-67—139 in 144 GP).

* After recording just four goals through their four-game regular-season series against the Rangers in 2021-22 (PIT: 1-3-0; NYR: 3-1-0), the Penguins have now scored 13 times en route to a 2-1 series lead, including fending off a three-goal rally from New York which tied the game at 4-4 before Pittsburgh pulled ahead for good. The Penguins’ seven-goal outburst in Game 3 marked the club’s highest total in a playoff contest since Game 6 of the 2018 First Round against the Flyers.

* Crosby, who has multiple points in the first three games of the 2022 Stanley Cup Playoffs, factored on each of Pittsburgh’s last two goals to help seal the win and surpassed Paul Coffey (59-137—196 in 194 GP) for sixth place on the NHL’s all-time postseason points list. The Penguins captain also recorded his 19th and 20th career playoff assists against the Rangers (25 GP) in the process, surpassing Henri Richard (18 in 30 GP) for the most among all players in NHL history versus the franchise.

* After Jonathan Huberdeau opened the scoring in Game 3, Ovechkin factored on two of Washington’s six unanswered goals to help the Capitals become the eighth team to take a 2-1 lead against the Presidents’ Trophy winners in the opening round of a best-of-seven series.

MAKAR, LANDESKOG LEAD AN AVALANCHE OF OFFENSE IN GAME 3
Gabriel Landeskog (2-2—4) and Cale Makar (0-3—3) posted four and three points, respectively, as the Avalanche put up another seven-goal outburst to take a 3-0 series lead against the Predators. Colorado has now racked up 16 goals this postseason, its most through the first three games of a playoffs in franchise history (previous best: 15 in 2021 R1 vs. STL).

* Landeskog recorded the first four-point outing of his playoff career and became the NHL’s third player to do so this postseason. The only players in Avalanche/Nordiques history that have posted more points in a playoff game are Peter Forsberg (2-3—5 in Game 2 of 1998 CQF) and Risto Siltanen (0-5—5 in Game 5 in 1987 DSF).

* Makar, who leads the NHL with seven points this postseason (2-5—7), notched his fourth career three-point playoff game and second this series. Only three defensemen in League history have recorded as many three-point outings in the playoffs before the age of 24: Paul Coffey (10 GP), Ray Bourque (6 GP) and Bobby Orr (4 GP). 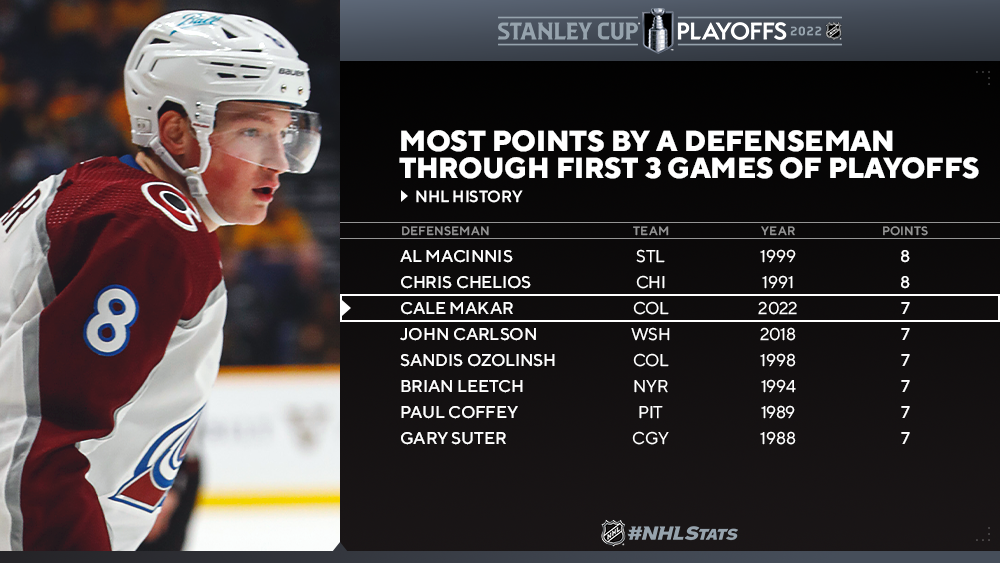 * Pavelski recorded his 14th career game-winning goal in the playoffs, surpassing Evgeni Malkin (13) for the most among all active players. The Plover, Wisc., native also sits third among U.S.-born players behind Chris Drury (17) and Mike Modano (15). 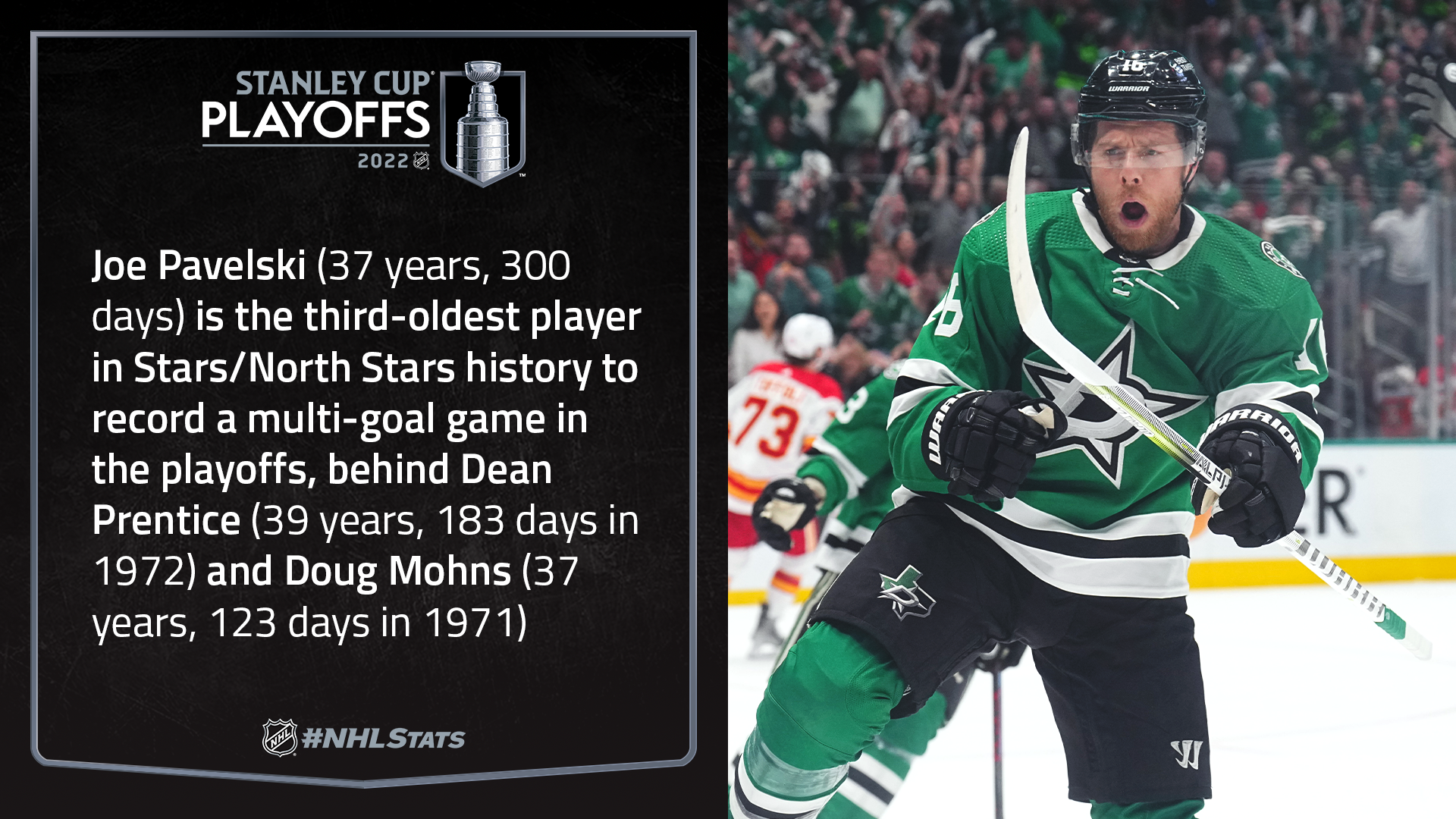 The Oilers and Maple Leafs are two of four teams eyeing 3-1 series leads and have their sights on doing so against the Kings and the defending Stanley Cup-champion Lightning, respectively. Teams that take a 3-1 lead in a best-of-seven series hold an all-time record of 296-30 (.908), including a 5-1 mark in the 2021 Stanley Cup Playoffs (3-1 in 2021 R1).

* Fresh off an eight-goal outburst in Game 3 and a six-goal outing in Game 2, the Oilers eye another win in Los Angeles. Edmonton can become the 14th team in NHL history and first since the 1995 Red Wings (4 GP from Games 1-4 of 1995 CSF) to score six-plus times in three consecutive playoff games. 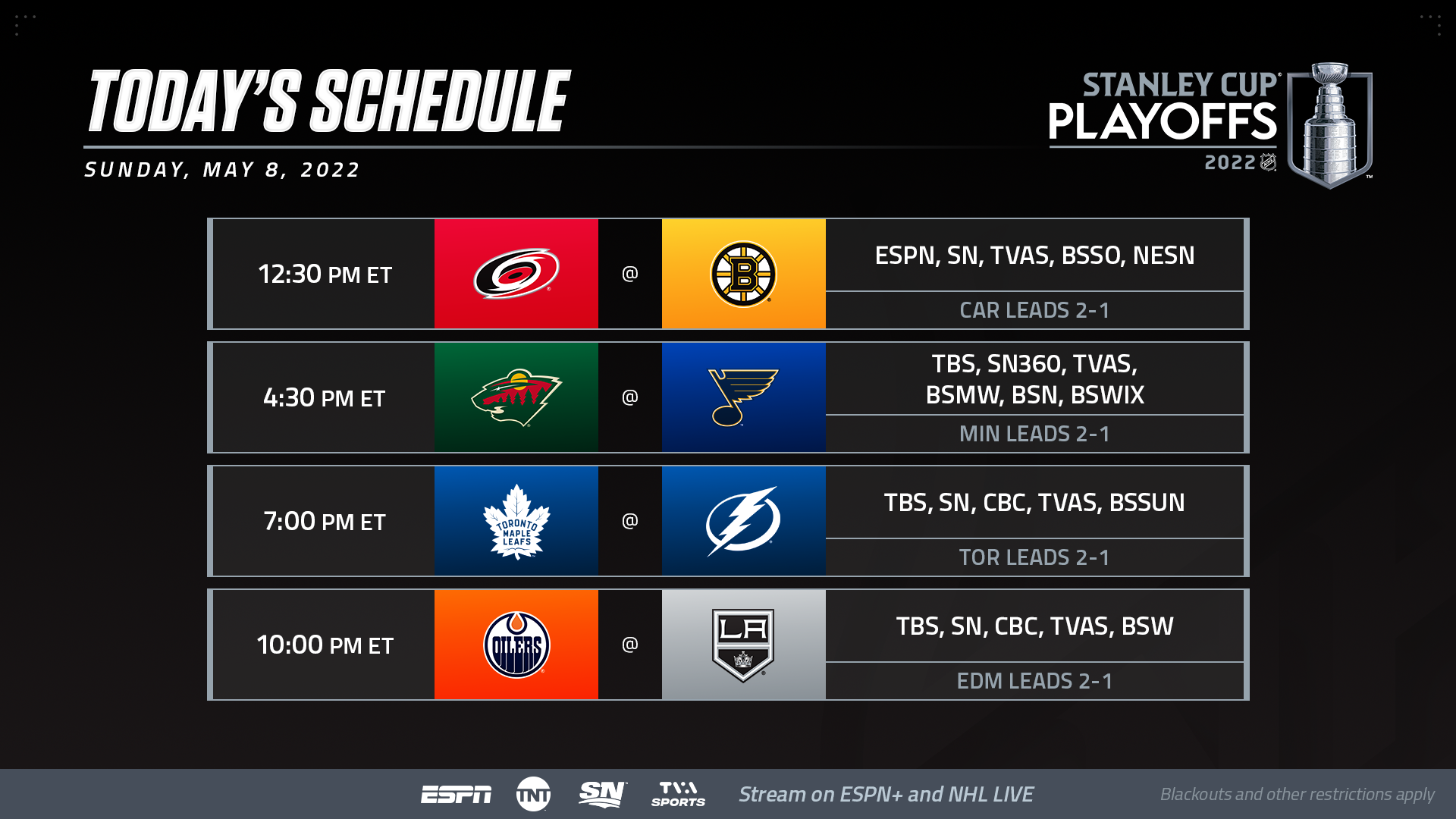