Wright, who can become the first Frontenacs player selected No. 1 overall in the NHL Draft and the first OHL player since Connor McDavid in 2015, maintains the No. 1 spot he held in the mid-season rankings. Wright ranked eighth in the OHL with 32-62—94 in 63 games during the regular season and is currently skating in the second round of the OHL Playoffs (2-6—8 in 6 GP).

“Shane Wright is the complete package as an NHL prospect. He is a strong stride skater who possesses deceptive speed and quickness to beat defenders, evade checking or lead a rush,” said Dan Marr, Director of NHL Central Scouting. “He has elite hockey sense with his vision, anticipation and composure to execute quickly on plays and has proven that he can carry the load and lead the way when it’s needed in game situations.” 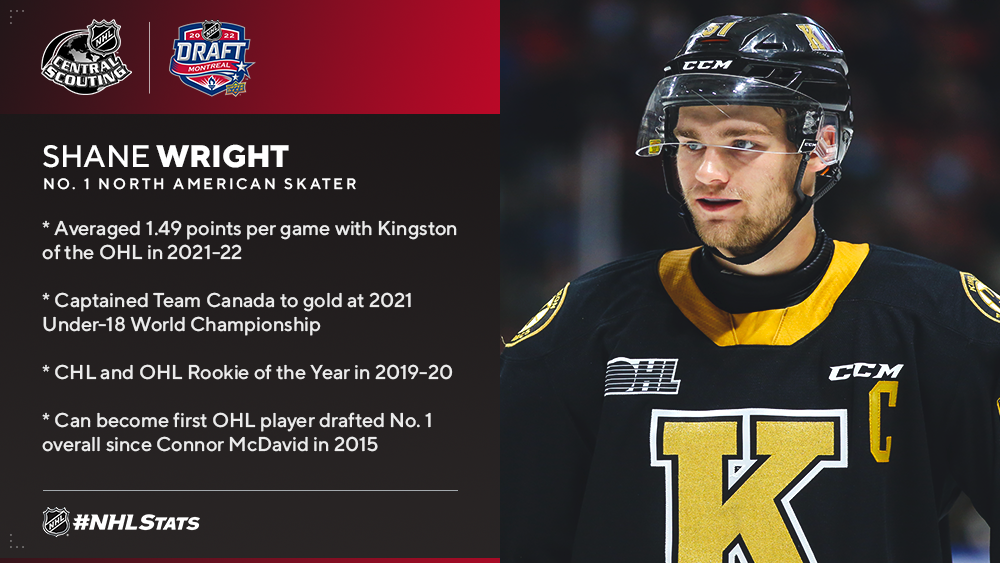 Slafkovsky climbed from No. 2 during the mid-season rankings to No. 1 among international skaters following a second half that included MVP honors at the Winter Olympic Games where he led the tournament in goals and points (7-0—7 in 7 GP) while helping Slovakia earn bronze – the country’s first-ever Olympic medal for ice hockey. Slafkovsky can become just the second Slovakian-born player selected in the top five of the NHL Draft, in which he would join Marian Gaborik (No. 3 in 2000 by MIN).

“Juraj Slafkovsky has that power winger element that NHL Clubs covet and his game has shown continual development this season while playing in the Pro Liiga in Finland and with the bronze medal-winning Team Slovakia at the Olympics,” said Marr. “He is a smooth and agile skater for his size and has the strength, smarts and offensive tools to be productive. What has been most impressive is the ability he’s shown to learn and quickly adapt his play to get results at every level he’s competed this season.” 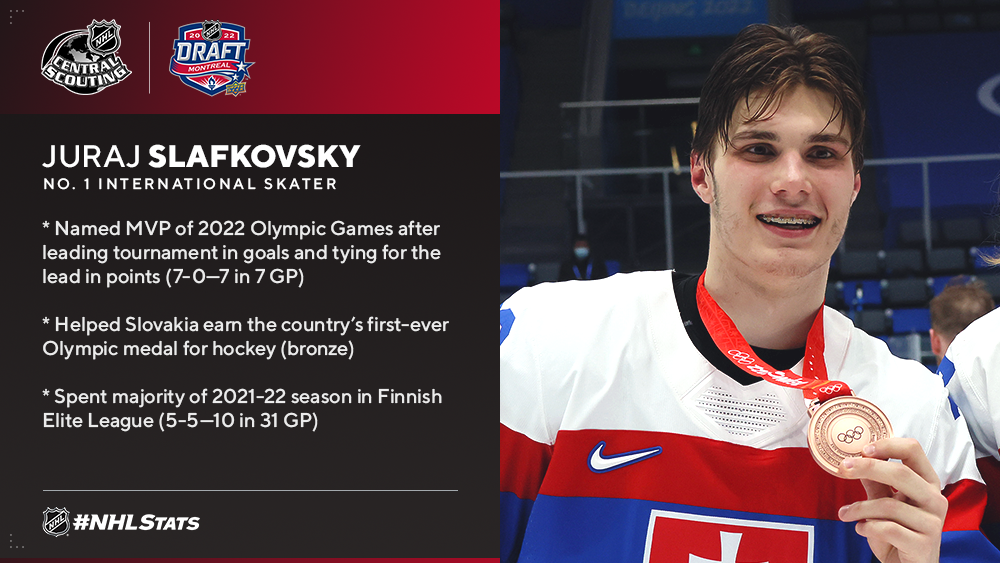 The remainder of the top-five ranked skaters in North America include a pair of forwards from USA Hockey’s National Team Development program’s Under-18 team, No. 2 Logan Cooley (Pittsburgh, Pa.) and No. 3 Cutter Gauthier (Skelleftea, Sweden), followed by a pair of centers from Winnipeg of the Western Hockey League in No. 4 Matthew Savoie (St. Albert, Alta.) and No. 5 Conor Geekie (Strathclair, Man.).

Cooley ranked second on USA Hockey’s Under-18 team in points (27-48—75 in 51 GP). He grew up in the Pittsburgh area and was part of the first-ever season of players who took part in Sidney Crosby’s Little Penguins Learn to Play Program. Cooley can go from the Little Penguins program to the highest Pennsylvania-born player selected in the NHL Draft – currently R.J. Umberger (No. 16 in 2001 by VAN). 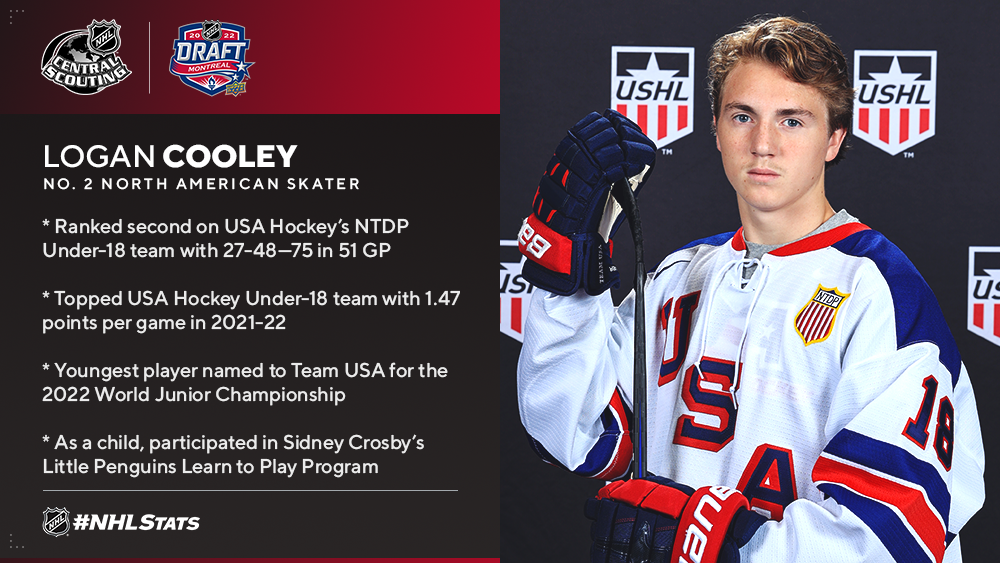 Gauthier ranked second on USA Hockey’s Under-18 team in goals (34-31—65 in 54 GP). His father, Sean Gauthier, was a goaltender and ninth-round pick by the original Winnipeg Jets in 1991 (181st overall) who had a 14-season professional career that included stops in the NHL, IHL, AHL, ECHL and Sweden. Gauthier was born in Skelleftea, Sweden, grew up in Scottsdale Ariz. and played minor hockey in the Detroit Honeybaked program. 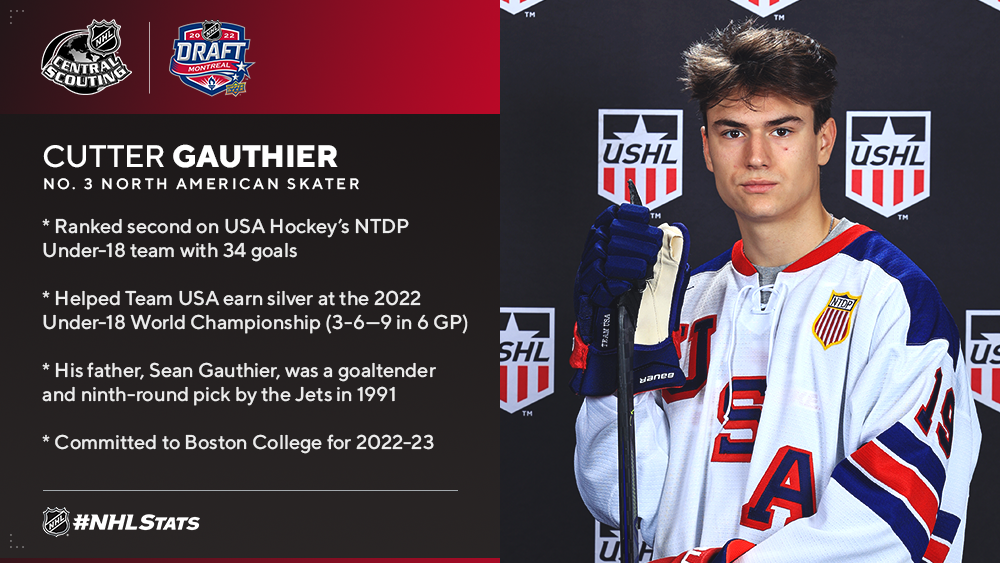 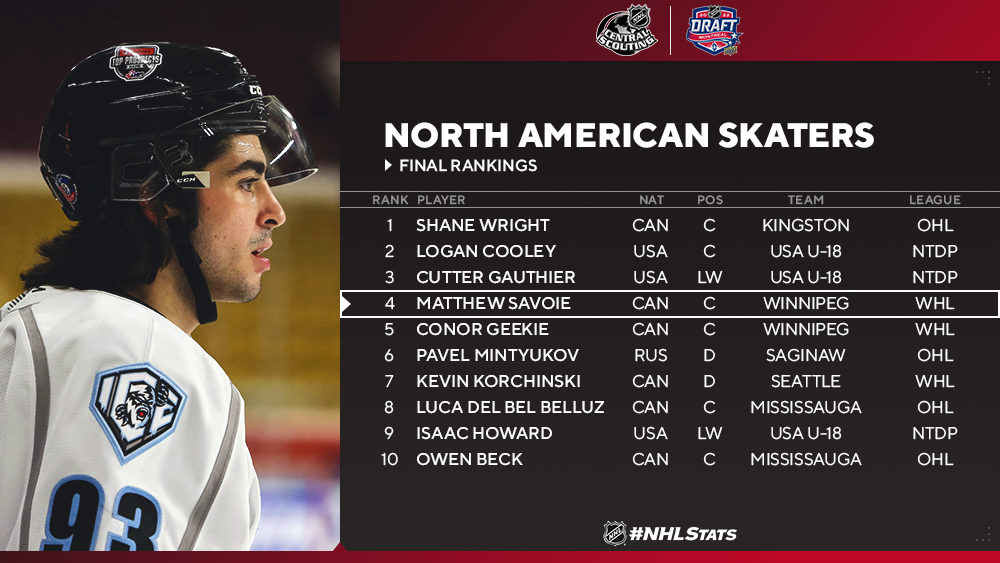 Following Slafkovsky on the ranking of international skaters is No. 2 Joakim Kemell (Jyvaskyla, Finland), a right wing for JYP in Finland’s top professional league. Kemell led all Finnish Elite League rookies with 15 goals in 2021-22 and was a key contributor to Finland’s bronze medal at the 2022 Under-18 World Championship. 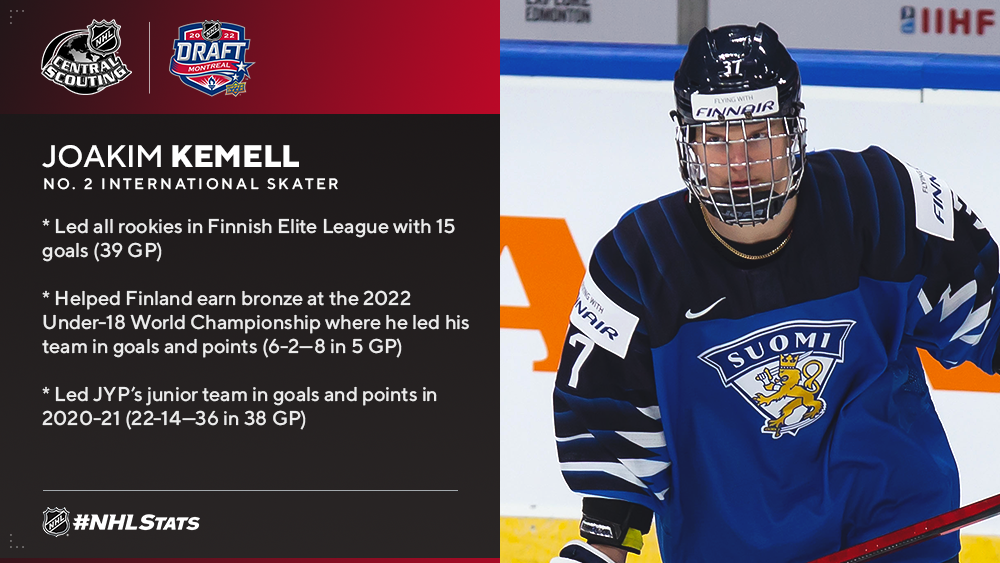 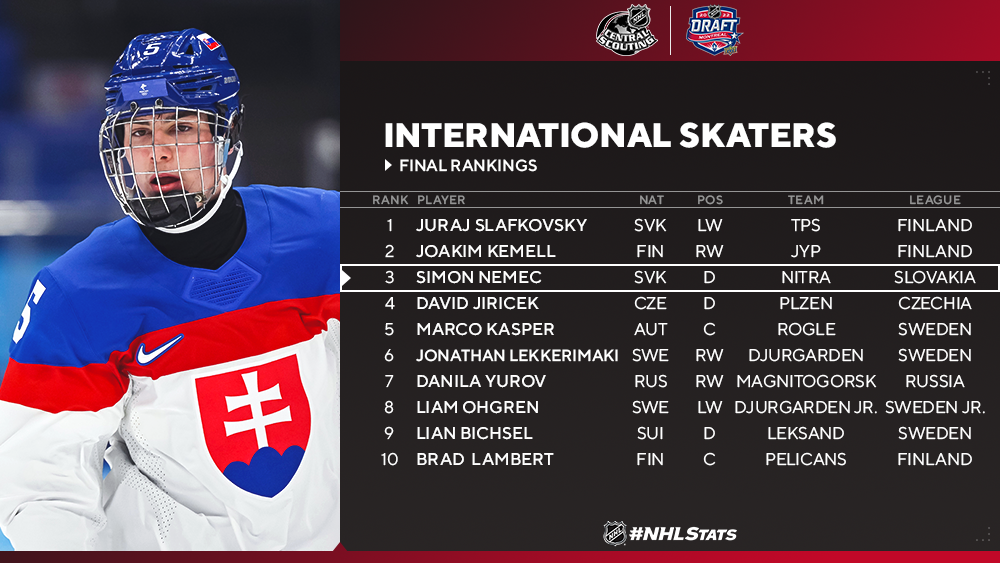 In its 47th year of operation, NHL Central Scouting provides evaluation and scouting of draft-eligible players to NHL member clubs. Headed by Director of Central Scouting Dan Marr, NHL Central Scouting employs eight full-time scouts throughout North America. To report on prospects playing internationally, the NHL employs the services of Goran Stubb and his staff at European Scouting Services based in Finland.

The 2022 Upper Deck NHL Draft is scheduled from July 7-8, 2022 and will be hosted by the Montreal Canadiens at Bell Centre in Montreal, Que.

Full rankings by region and additional prospect profiles, including scouting reports, are available in the attached documents.